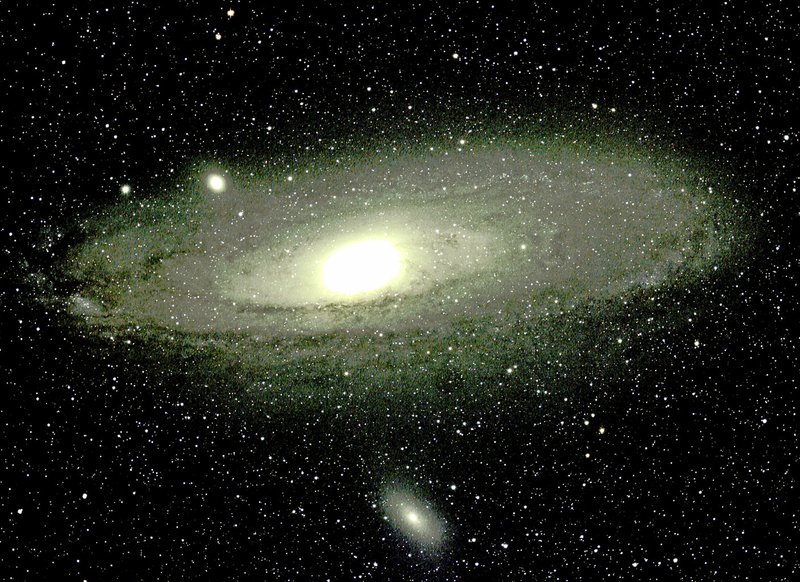 David Cater/Star Gazing M31, the most nearby galaxy about 2.5 million light years distant, is one of the featured objects in the October night sky.

Ah...October! One of my most favorite months! It really becomes autumn in October and I always look forward to it. I have a number of trees at my home and some of them show wonderful color beginning now. I love it!

Some of the clearest skies all year may occur in October. The air is often cooler and denser than during the summer and this makes for good observing with the naked eye or binoculars. If one has a telescope, October can present nights with very steady air so that, for example, Jupiter, Saturn, the Moon and many star clusters will be at their sharpest.

Jupiter and Saturn are easy to find in the south-southwest, lying amidst the constellation Sagittarius and right where the densest part of the Milky Way forms the distant background to these two gas giants in our solar system.

The Milky Way lies directly overhead, making it convenient to see by the casual observer if the skies are dark enough. If you look from overhead and proceed south, the star count will increase and, near the southern horizon, you will see Jupiter and fainter Saturn lying right on it.

Jupiter and Saturn, lying in the position of the densest part of the Milky Way, present an interesting issue of perspective. Jupiter and Saturn are within our Solar System. Roughly, Jupiter lies about 3/4 of a billion miles from Earth, Saturn about a billion miles. However, the densest part of the Milky Way lies about 23 thousand light years from Earth! (For the fun of it, multiply 23,000 by 6 trillion. That would be the rough distance, in miles, to the center of the Milky Way. Count your zeroes carefully!) On the night sky, everything looks flat and at the same distance away because our eyes cannot see the enormous perspective the universe presents.

I know autumn is upon us by another sign -- beyond the red leaves and cooler weather. The biggest, most nearby galaxy to the Milky Way is now visible. It has a catalog number designated as M31. M31 can be seen a bit east of the plane of the Milky Way and about 40 degrees up in the sky. It is somewhat difficult for the casual observer to find so if you want to see good images of it, enter 'images of M31' in your favorite search engine and you will see some excellent pictures, often done by amateurs. Also, enter something like 'sky map to find M31' on your computer and you should get a diagram of star positions that can guide you to see it.

Under very dark skies -- and when I was much younger -- I have seen M31 just using my eyes. Binoculars give a much better view. It will look like a creamy oval of faint light in binoculars -- a little cloud. If you find it, you will see only the core or middle third of this huge galaxy, the spiral arms of this galaxy being too faint to see visually. M31 is about 2.5 million light years distant and only long exposures with film or digital cameras will show these arms. I have included an image of this galaxy I made last year from my backyard in Siloam Springs. (As an amateur, I am always trying to do better photography -- I will try this fall to image it again, ever trying for improvement.)

On Oct. 29, just after the sun sets, look southwest and you will find the thin crescent Moon and Venus, the next planet inward toward the Sun from Earth. Venus has been a planet only seen at dawn for several months but it returns to the night sky in the fall. As the months march on, Venus will appear higher and higher in the west -- it will be quite bright. I do not have a good image of Venus so I will be trying for one when Venus is well above the horizon. If I get a decent image, I will share it with you in this column.

Before the cold sets in and/or the sky becomes cloudy for weeks at a time, get out there and see the wonderful universe in one of the best months to see it.

-- Dr. David Cater is a former faculty member of JBU. Email him at starbug352@yahoo.com. The opinions expressed are those of the author.