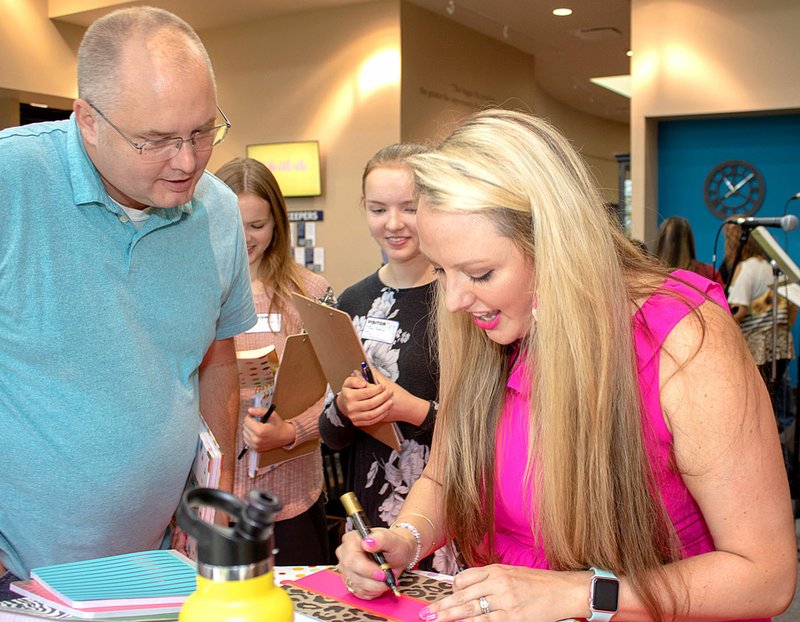 Hand-lettering artist and author Maghon Taylor wants people to find joy rather than perfection in their creative work, reminding her students that if the worst happens, mistakes can always be turned into confetti.

The North Carolina native visited Siloam Springs last month as a grand finale to her book tour. She spoke to DaySpring employees and held a public book signing at Occasions gift store, as well as several other stores in Northwest Arkansas.

Taylor's book Happy Hand Lettering was released by DaySpring on Aug. 1. The company expanded into book publishing about a year ago and to date has released more than 70 titles, according to Brenda Turner, vice president of communications and administration for DaySpring.

Many of DaySpring's publications are gift books that serve as extensions of content the company produces for greeting cards, with the same uplifting messages just in a longer forum, she said. Taylor's book is a little different because it combines an inspirational message with a how-to workbook on hand lettering.

Hand lettering is currently a very popular trend in general and many DaySpring designers are very into the art form, Turner said. The company discovered Taylor when she spoke at a women's conference last year, she said.

Taylor started the business "All She Wrote Notes," in 2013, which offers hand-lettering classes, products and custom calligraphy services. The business has partnered with national retailers and was named the 2017 Best Calligrapher in the South by Southern Weddings, according to her website, allshewrotenotes.com.

Taylor has always been a hand-lettering artist at heart, she said. In her book, she wrote that she became fascinated with the art form during her childhood when an employee of a local gift store would hand letter her name onto school supplies. Starting in second or third grade, she carried a bag of markers with her everywhere to create uplifting and pretty messages, and if a teacher happened to catch a note she passed, her reaction was "open it up, share it around," she said with a laugh.

Her interest continued in high school. As a cheerleader she made the banner for the football players to run through before a game, and in college, where as a resident assistant she enjoyed decorating bulletin boards.

Taylor said she started her business by accident when notes shared with friends prompted them to ask her for more. At first, she compared her work to professional calligraphers on YouTube and felt inadequate. She said most of the calligraphy she saw was very elegant, while hers was more fun and whimsical.

"My girlfriends encouraged me. ... It gave me permission that my work didn't have to look like anyone else's, I could just be myself," she said.

Taylor said she can teach anyone to do hand lettering, it doesn't take good penmanship, just slowing down and adding a few steps.

Throughout her book, Taylor emphasizes finding joy in hand lettering rather than perfection.

"I think if you are sitting there and giving yourself the gift of time to be creative, that is going to fill your heart," she said. "If you are willing to share that with a friend or family member, they are going to get so excited and feel so appreciated and valued with the time you set aside to do it. ... It's not about the final project it's about how you felt when you were making it. If you have a heart of happiness and joy, that is going to shine through."

Taylor said she has also struggled with the urge to make things perfect, noting that people, especially women, are their own worst critics.

Early on, Taylor started shredding her mistakes and turning them into confetti.

"Confetti is a metaphor and it has been the biggest lesson," she said. "Even when you mess up or make mistakes, if you are willing, those hard things can be used for a greater good. I turn all my calligraphy mistakes into confetti because I don't get sad when I mess up,"

Taylor sprinkles the confetti into her online orders and with multiple shredders in her office she never runs out.

"It is a message God has used to restore me, that you don't have to be perfect, your mess can be your message," she said.