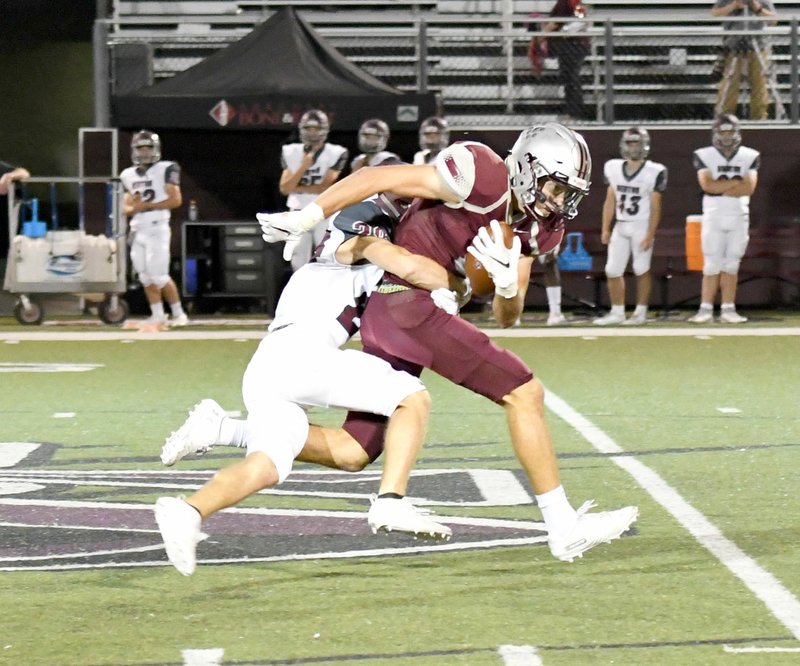 Bud Sullins/Special to the Herald-Leader Siloam Springs senior Oren Stafford runs with the ball after making a catch near midfield against Benton during last week's game at Panther Stadium.

Siloam Springs has spotted its opponents a two-touchdown lead in each of its last three games.

And while the Panthers have managed to claw back into the games in the last two contests -- a 28-27 win at Sheridan on Sept. 27 and a 28-26 loss at home to Benton last week -- they know they cannot afford to do the same this week against No. 1 Greenwood at Smith-Robinson Stadium.

"We've got to figure out a way to overcome that," said head coach Brandon Craig. "We can't keep going out and giving up 14 points and expect to overcome that. It's impossible in this conference."

It's especially daunting against Greenwood, the two-time defending Class 6A champions, who are 5-0 overall and 2-0 in 6A-West league play and have outscored its opponents 94-24.

"It doesn't matter where we play them, we're going to have to play almost perfect football to beat a team like that," Craig said. "Coach (Rick) Jones has been there for 16 to 17 years. It's a machine. They're running at top speed. You're going to have to play your best football to even have a shot at even thinking about being in the game and winning."

Junior running back Hunter Wilkinson had 14 catches for 127 yards and has rushed 57 times for 267 yards and six scores.

Siloam Springs (2-3, 1-1), meanwhile, has seen some good production from several players the last two weeks, including senior wide receiver Oren Stafford, who caught a career-high six passes for 148 yards last week against Benton. Stafford had two catches for 63 yards against Sheridan the week before and now has nine receptions for 219 yards.

"It's just confidence," Craig said. "(Stafford) had a tremendous offseason, put in a ton of work, got a lot stronger, a lot more flexible, built up his speed. I thought he was going to have a great year. He kind of sputtered coming out the gate, just really comes down to having game experience. He's gotten that game experience in the nonconference schedule and he's started to shine. He's a weapon. He can run. He can blow the top off coverages. Just got to make sure he gets opportunities and that he catches the ball every time we throw it to him."

Craig said running backs/linebackers Jackson Norberg and Camden Collins have been playing well. Last week against Benton, Collins had a pick six and led the team in tackles.

"He had a tremendous night," Craig said.

Sophomore safety Christian Ledeker had an interception for the second-straight game.

"Christian Ledeker's been huge for us because he's a sophomore and I really didn't expect him to play much this year," Craig said. "He's had a great year so far this year, really coming into his own as a player."