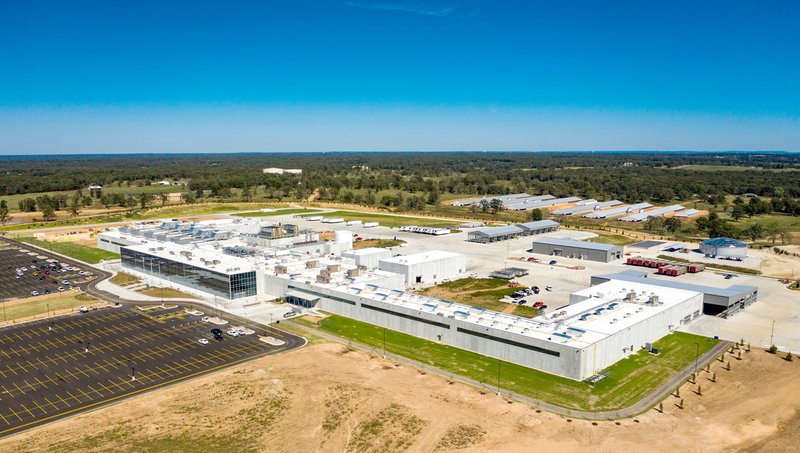 Photo submitted Simmons Prepared Foods announced on Wednesday that operations at its new $300 million poultry production facility are beginning to ramp up as scheduled. The more than 315,000-square-foot plant is located on the center of an 870 acre plot of land along Arkansas Highway 59 between Decatur and Gentry.

Operations at Simmons Foods' new $300 million poultry production facility are beginning to ramp up as scheduled, the company announced Wednesday.

Production at the new plant, located along Arkansas Highway 59 between Decatur and Gentry on an 870-acre piece of land, began on a small scale during the week of Sept. 30 and will steadily increase to reach the first phase of full production in January 2020, according to a press release from the company.

"These last few weeks have been a critical phase in preparing for the startup of operations here in Benton County," said David Jackson, chief operation officer for Simmons Foods. "There has been a tremendous amount of work to get to this point but there is still work to do.

"We are in the midst of a staged transition and a gradual ramp up of production in a brand new environment. Every piece of equipment and each process is being assessed to ensure the highest safety and product quality. This is important work and we're pleased to be on track with the project timeline."

The Siloam Springs-based company announced plans for the new facility in October 2017 and a dedication ceremony took place in June 2018. The company took local officials on tour of the plant in July and announced plans to begin production in October.

The plant is designed to harvest live chickens from around 300 independent family farmers to produce fresh and frozen chicken products, Senior Director of Communications Donny Epp said in July. It is replacing the company's current processing facility in Decatur, he said.

Approximately 900 employees are transitioning from the existing Decatur plant to the new facility, the press release states. The company plans to increase staffing at the new facility to 1,200 employees in January with the potential of reaching up to 2,300 employees with an estimated annual payroll impact of $86 million by 2022.

"One of the things we're most proud of with this facility is the work environment it provides for our team members," Jackson said. "The design, layout and finishes are the result of an intentional effort to make this a place where people are proud to come to work. This is a world-class facility."

Simmons opened a hiring center in Siloam Springs last year to streamline the hiring process, the press release states. Job candidates can apply, interview and in some cases even complete the hiring process in a single visit, it states.

The processing facility will also increase the need for live chickens by 28 percent, which will increase the number of chicken houses, Epp said in July. Most of the farm growth will take place in the tri-state area -- Arkansas, Oklahoma and Missouri.

"About 50 percent of new construction is happening with existing farmers, we're growing with existing partners in the area," Epp said in July. "They are very excited about the opportunity to grow their family-owned businesses along with us."

Highway 59 was widened earlier this year to include a turning lane in front of the plant to accommodate traffic coming in and out of the facility. The plant is expected to have an estimated $2 million impact in utility services on the cities of Gentry and Decatur, the release states.

C.R. Crawford Construction, the general contractor for the new plant, has logged over one million safe work hours to date, on the project, the press release states. Exterior finish work, tree planting and landscaping at the facility will continue over the next few months and an opening celebration event is planned for spring 2020, it states.