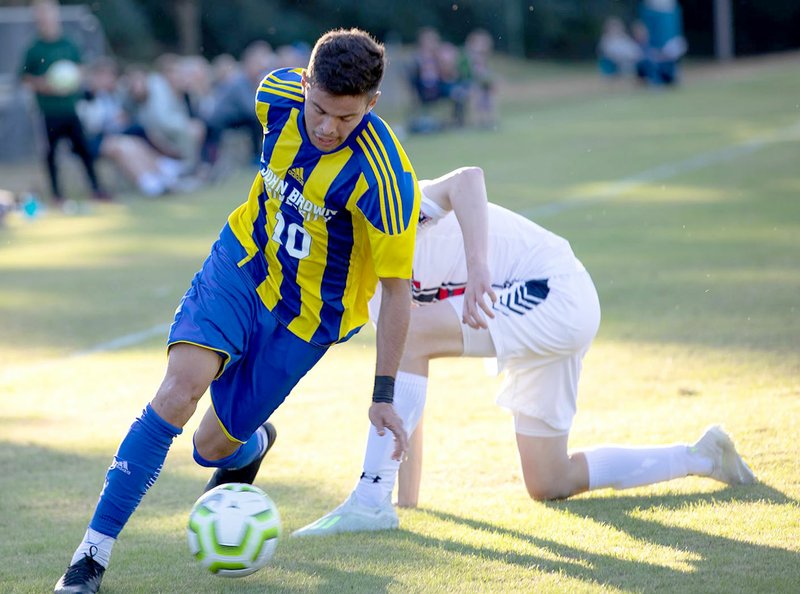 It took just 74 seconds for the John Brown University men's soccer team to take the lead as the Golden Eagles pieced together a complete-game performance in a 5-0 victory over Oklahoma Panhandle State on Thursday afternoon at Alumni Field.

Freshman Jacob Zamarron continued tearing up the Sooner Athletic Conference with a goal and senior Amilcar Gonzalez extended his nation-leading assist total to 15, allowing JBU to take its seventh-straight victory of the season.

Senior Britt Wisener was not needed to contribute any saves in the effort. The backline held the visiting Aggies to just one shot attempt, which was blocked, in the first half as the hosts held possession of the ball for the vast majority of the afternoon.

Zamarron opened the scoring in the second minute when he finished off a give-and-go with freshman Oscar Carballo. The striker broke in all alone on OPSU keeper Cristofer Monje and buried a shot for a quick Golden Eagle lead.

Carballo recorded his seventh assist of the season on the goal.

Despite out-shooting Panhandle State 17-1 through the first 45 minutes of play, the hosts had only a 1-0 lead to show for it. The momentum would carry JBU to a very different second half that saw the hosts explode for four goals.

Zamarron finished off the brace in the 55th minute when he redirected a shot Marcelo Mendes pass from the left side of the box past Monje to double the John Brown lead.

Senior Kelvin Omondi, making his second start of the season, scored just three minutes later when his blast from the top of the box rang off the right post and in, pushing the John Brown advantage to three.

In the final quarter of the contest, a pair of Golden Eagles netted their second goals of the season in sophomore Micah Herrmann and freshman Eli Jackson.

Herrmann's finish in the 74th minute was the result of pretty passing that began in the midfield with Gonzalez. His through ball up the right flank to sophomore Adrian Immel allowed the defender to cross a ball back into the box with pace -- and find Herrmann on the doorstep of the goal mouth to increase the score to 4-0.

Jackson's goal was very similar as junior Samuel Estrada played a ball out wide to senior Ryan Smith on the right wing. Smith's cross into the box found Jackson just fed from the goal line to complete the scoring in the 87th minute.

The Golden Eagles finished the contest with an impressive 36-1 shooting advantage. Monje, despite being tagged with the loss, was active all night, recording 16 saves on 21 JBU attempts on goal.

JBU was scheduled to host Wayland Baptist on Saturday. Results were not available at presstime.