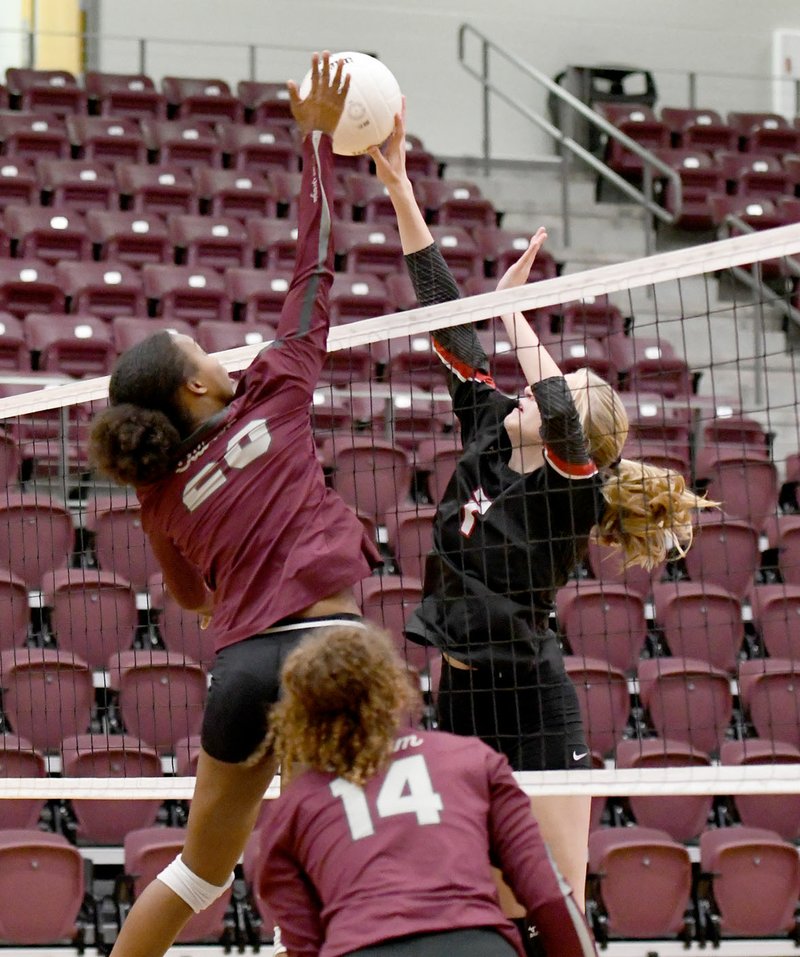 There was no slowing down the Siloam Springs volleyball team on Tuesday night -- especially on the evening when the Lady Panthers honored their favorite teachers.

Lady Panthers head coach Joellen Wright said the team came out focused and fired up with the special night, in which each of the players honored an individual teacher that has been special to them.

"I think they were 'hyped' -- as they like to say -- from Teacher Appreciation Night," Wright said. "It made them feel good to do something good for somebody else. I could tell when we went in the locker room (before the match). They were jumping up and down more than normal. That kind of spurred them, and then they just stayed focused through their jobs. They didn't get distracted."

The Lady Panthers used an 11-0 run in the first set to take a 17-4 lead on their way to a 25-10 victory. The run started with a combo block from Jael Harried and Makenna Thomas, and Thomas also served four aces in the run.

Siloam Springs used another big run in the second set.

The Lady Panthers trailed 10-7 after a bad serve, but Rachel Conrad hammered a kill to get the ball back in the Lady Panthers' possession and started what would be a 17-0 run.

This time it was Hanna Fullerton serving aces for Siloam Springs, which turned a 10-7 deficit into a 24-10 lead before winning 25-11.

"They haven't had those runs, so it's good confidence going into the last couple of weeks of the season," Wright said. "Hanna especially, she is powerful for her little body. She did a great job. They even subbed and tried to distract her and (called) timeout, she was able to keep it going. That's what was impressive."

The Lady Panthers didn't have any big runs in the third set but still were able to finish off the match without much of a threat.

Thomas contributed three kills and passed out 15 assists to go with 17 digs and six aces.

Abby Kelly led defensively with 22 digs, while Abby Hornbuckle had 15 digs and Fullerton 13 digs and seven aces. Vilonia dropped to 1-22 overall and 0-11 with the loss.

"After playing teams we've been playing all weekend and Greenwood on Thursday to slow it down and be able to adjust like that I was really super proud of their focus and fun that they had with it," Wright said.

The Lady Panthers were playing their seventh match in five days, including five matches on Saturday, Oct. 12, at the Conway Wampus Cats Invitational. Siloam Springs went 2-3 overall in Conway, losing to Bryant 2-1 and Brookland 2-0 before defeating Shiloh Christian 2-0 and Beebe 2-1. The Lady Panthers wrapped up play in Conway with a 2-1 loss to Little Rock Christian.

It's the second time this season the Lady Panthers have lost in five games to the Lady Warriors.

Makenna Thomas had 37 assists and 29 digs, while Abby Kelly led with 43 digs and Hanna Fullerton 41 digs. Maggie Torres chipped in 29 digs while Abby Hornbuckle had 27 digs.

Fullerton and Clara Butler each served an ace.

The Lady Panthers travel to Greenbrier on Tuesday before returning home for senior night against Russellville on Thursday.