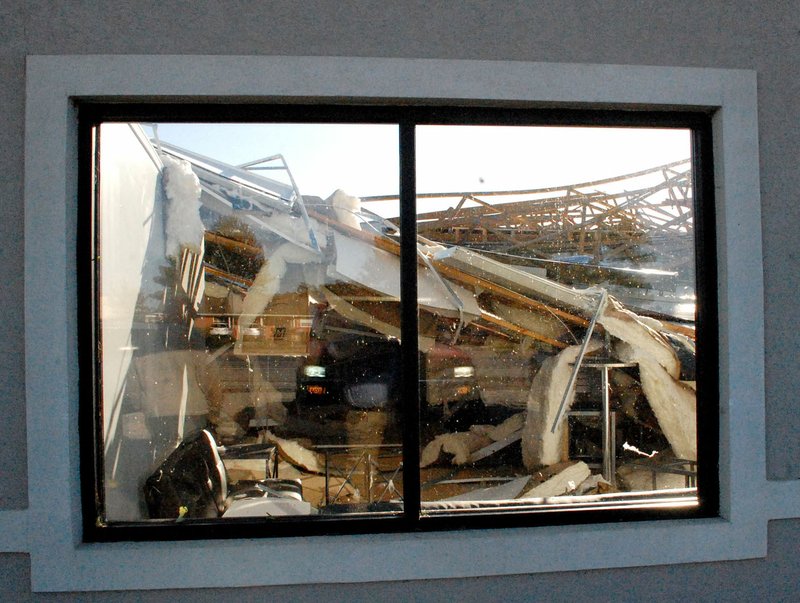 Marc Hayot/Herald-Leader A view through a window at the Eastgate Shopping Center along U.S. Highway 412 in Siloam Springs shows the roof is missing and heavy damage inside the building after severe storms during the early hours of Monday morning.

Meteorologist Mark Plate with the National Weather Service in Tulsa said a damage survey team was en route to Northwest Arkansas on Monday morning and should know more about whether the damage was caused by a tornado or straight-line winds.

Two people were transported to the hospital with minor injuries after the semi-truck they were driving on Arkansas 59 just north of U.S. 412 was blown over by the storm, according to Fire Chief Jeremey Criner. The fire department also responded to a parked semi-truck that had rolled over, but the people inside had already been transported to the hospital by onlookers and the fire department didn't have any information about their injuries, he said.

In addition, the fire department was dispatched to reports of trees and power lines down across town, blocking some streets. By mid-morning on Monday, Criner said that most roads in the city were reopened.

The Siloam Springs Police Department spent the night doing damage assessment, according to Captain Derek Spicer. On Monday morning, police officers were still working with the electric department to direct traffic at major intersections so that electrical crews could complete their work, he said.

The Eastgate Shopping Center along U.S. 412 lost its roof during the storm. David Walters, who owns 412 Vapors, said his business sustained at least $30,000 in damage due to the storm.

Two buildings at the Siloam Springs Regional Airport appeared to have been damaged, but airport manager Sean Baker could not be immediately reached to confirm the damage.