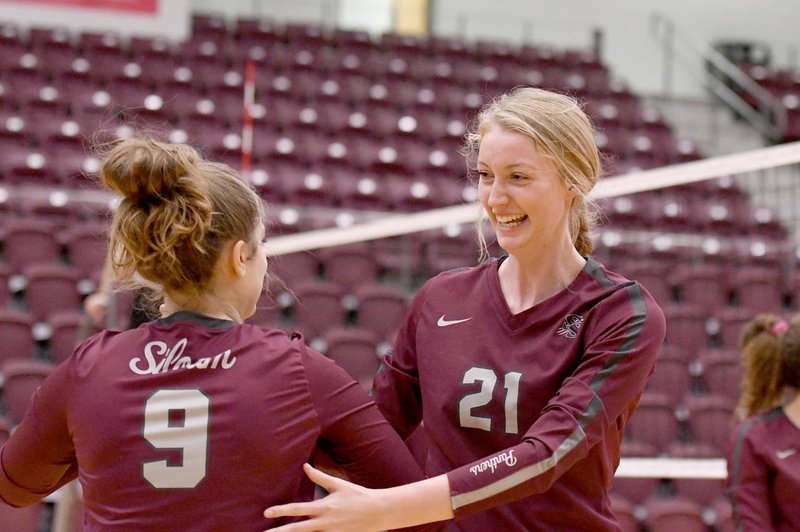 Bud Sullins/Special to the Herald-Leader Siloam Springs senior Abby Hornbuckle (left) is greeted by senior teammate Abby Herring during a substitution in a home match against Vilonia on Oct. 15.

Abby Herring is positively the most positive player on the Siloam Springs volleyball team.

And according to her teammates and coaches, it's a genuine positivity.

"She's easily one of the most encouraging girls out there," said senior teammate Abby Hornbuckle. "She always takes responsibility for her actions and even when maybe it's not her fault. "Even if she wasn't even involved in the play -- she always comes over and tries to lift up the girls that are on the court."

Herring, a 6-foot middle hitter, is one of nine Siloam Springs volleyball seniors who will be honored before Thursday night's game against Russellville as the Lady Panthers' season will come to an end, falling short of the playoffs.

But there won't be any regrets or looking back on Herring and her mindset.

She'll be out there with her teammates, wearing a big smile with an encouraging hand clap and spirit that is infectious and uplifting.

"I think the important thing is you have today," Herring said. "Live it to the fullest and try and encourage other people around you so they can live their life to the fullest."

Herring said there are times she'll greet people who walk past her and they'll give her strange looks.

"I'll look at them sometimes and people think I'm being sassy, but I'm like, why not?" Herring said. "Why not be positive? Why look at the bad things in life when you can look at the positive? God put us on this Earth for a reason, so might as well live with what we have."

Herring has four older brothers -- Caleb, Jordan, Jacob and Nicholas -- who have all served or are currently serving in the Marines -- and an older sister, Hannah, who is going into early childhood education. All her siblings also appreciate her infectious positive spirit.

"It drives them crazy sometimes," she said with a laugh. "Sometimes they call me and they're like 'OK, Abby how's your day?' It makes me happy. They'll call me sometimes after they have had a bad day. They like to get away from the stress of life sometimes."

Herring's outgoing attitude has earned her the Lady Panthers' most outstanding teammate award each of the last two seasons -- and though the team hasn't voted on it for this season she's likely a fair bet to win it again.

"It's genuine," said head coach Joellen Wright. "A lot of people can be nice, and girls have really good intuition. They know when someone's fake. With Abby, she pushes through hard things with a positive attitude.

Herring agrees that her Christian faith does play a large role.

"The whole reason I do volleyball and am positive is because Jesus Christ is in me and He shines through me in what I do," Herring said. "It is nothing of myself as if I try and do something it will fail, but it is all Him and He is the reason I play and encourage those around me. My biggest goal in life is to be a light to those who don't know Jesus, and that maybe through His light shining in me they might also choose to follow Him."

On the season, Herring has 108 kills, which ranks third on the team. She was instrumental a couple of weeks ago as the Lady Panthers rallied from a 2-0 deficit to beat Alma 3-2, including trailing 14-9 in the fifth and decisive set.

"What I remember is being on the court and seeing everybody's face and mentally in my mind thinking, 'I'm not going to let myself think for a moment we're not going to win the game,'" Herring said. "My only thought was we were going to make it out of this point. We got a good pass out of back row, Kenna set it and hit the ball and we started winning. That's what I remember."

Though the Lady Panthers' season will end Thursday night, Herring doesn't look at that as a negative.

"My big thing is I don't get to do this again," she said. "I'm not going to play volleyball in college so just taking the moment we have and enjoy playing each point."