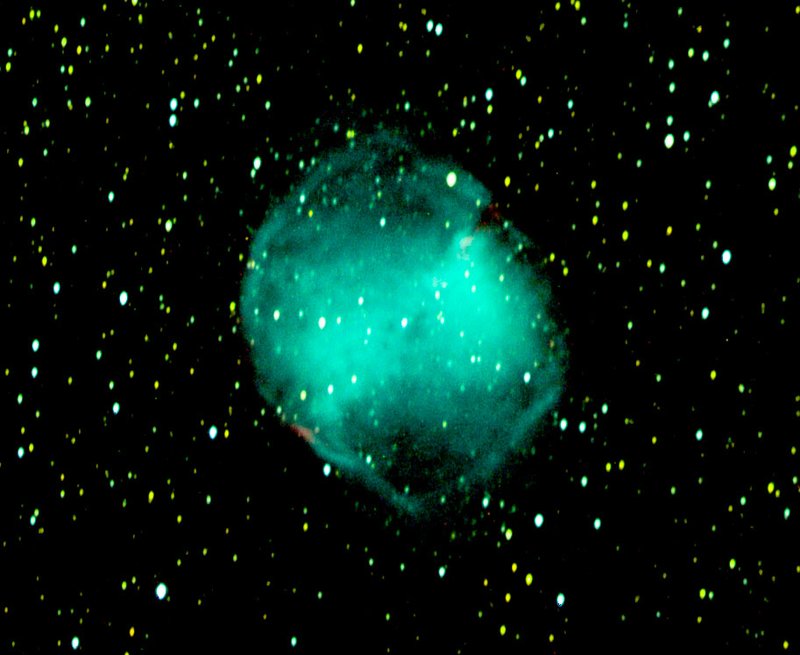 Photo submitted Pictured is shell of hot gas, which is the remnants of a star that died a gentle death.

November. Just about the end of this year. Years have a history of their own. We often use the imagery of a new year appearing like a baby and brought in by a stork -- wearing an appropriate post office cap. Then, at the end of a year, we picture the year as a very old man, emaciated, weak and just about to become history.

Of course, every living thing is born, lives out its life, and passes on...

Interestingly, stars have a life history too. They come into being from condensed clouds of hydrogen, eventually reach a mass and density so great that they begin to fuse hydrogen into helium and -- a star is born. Depending on its starting mass at fusion, a particular star may have a lifetime as short as about 10 million years and some stars, the Red Dwarfs, may burn for more than a trillion years, for they are tiny in mass. Here is the rule -- the more massive a star is at the time of fusion, the more gravity it has. The consequence of this is that enormous stars will burn through their fuel in millions of years. A Red Dwarf, being only about the size of the Earth at fusion and having little internal gravity, will burn its fuel very slowly. When all the big stars have burned through their fuel, the Red Dwarfs will still be burning for a long time to come. However, and this is a big if, if the universe goes as scientists believe it will, there will be a time when even the Red Dwarfs will have exhausted all their fuel. The universe we know now will be cold and dark then...

What about our Sun? It will have its own history too. The Sun, our star, is about in the middle of the size and mass distribution -- between the really massive stars and the tiny Red Dwarfs. Most scientists agree that the Sun is about half-way through its burning cycle and will last another 10 billion years. Eventually though, it will run out of fuel and die.

How do stars die? Some die violently, and some die rather gently. Really big stars, greater than 100 solar masses, will become Black Holes and some, just a bit smaller will become neutron stars. At about a mass of 10 solar masses, a star such as this will become a supernova, exploding very violently and scattering all of its atomic elements throughout many light years. These elements may recycle to form yet other stars and this cycle may repeat across the eons.

A star such as the Sun will die gently. It will swell up and finally shed its mass in a roughly spherical shell that, over a long period of time, will simply dissipate into diffuse gas. It will leave behind a so-called white dwarf, just the core of what was once the Sun, likely smaller than the Earth. I made an image of such a star this last summer and I have included it in this month's column. The little shell of hot gas can be seen as a sort of bubble, with the remaining white core at the center.

Jupiter and Saturn can still be seen in the southern November sky, but they will soon be over the horizon. They will be between us and the Sun and will be out of our line of sight until they reappear, at dawn, towards the end of winter. The Milky Way is still overhead for convenient viewing at a dark site. M31, our huge galactic companion, is in prime position for viewing with binoculars. Go to your favorite web browser and get a map of where it is in the night sky. It will be a diffuse oval in 50mm binoculars.

It will soon be the end of 2019, but we still have a long time to go with our Sun. Get out there a view it all!

-- Dr. David Cater is a former faculty member of JBU. Email him at [email protected] The opinions expressed are those of the author.

Print Headline: Lifespan of our Sun and other stars