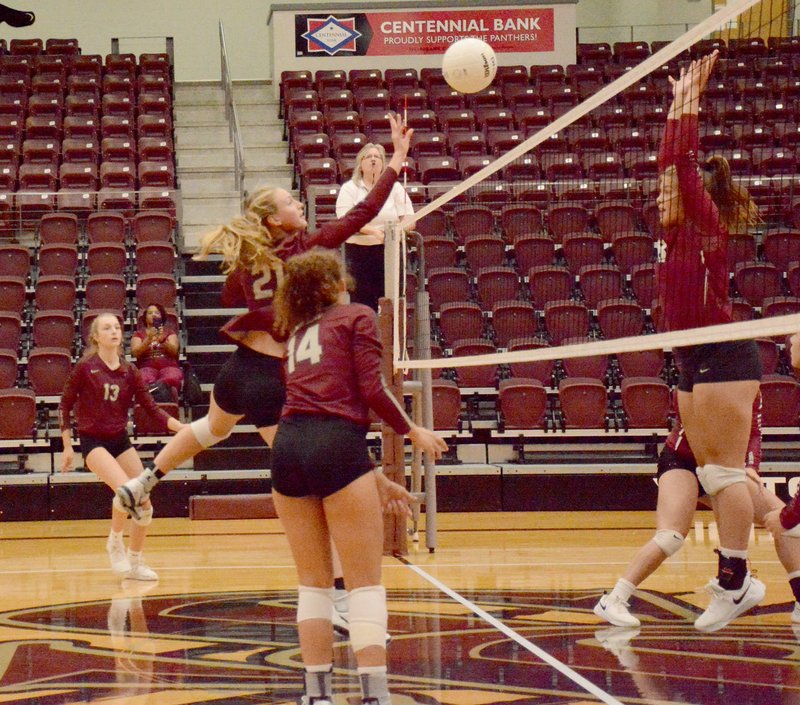 Graham Thomas/Siloam Sunday Siloam Springs senior Abby Herring, No. 21, goes up for a tip over the Beebe block during Tuesday's match inside Panther Activity Center. The Lady Badgers swept the Lady Panthers 3-0.

The Siloam Springs volleyball team picked up an exciting 3-2 win at Bentonville West on Monday night, but the Lady Panthers couldn't sustain that momentum in their first 5A-West Conference match.

Beebe, led by strong contributions from seniors Mikayla Lawrence and Hannah Gammill and junior Layla Wilson, won a pair of close sets and then rode a big streak in the third to sweep Siloam Springs 3-0 (25-22, 26-24, 25-17) to open league play Tuesday night inside Panther Activity Center.

The Lady Panthers seemed a bit lethargic, playing their sixth match in four days, after competing in the Little Rock Spikefest last Saturday and then at Bentonville West on Monday.

"There were definitely some energy issues," said head coach Joellen Wright. "It was hot in that gym. The AC wasn't working or something. We were definitely drained. (Beebe) was an opposite team from what we just played. They hit great roll shots and tipped everywhere. Bentonville West hammered it. Fastest arm swings I've seen in years and we were digging it. ... We had a hard time adjusting. Give them credit. They drove up here and kicked our butt."

Siloam Springs led 17-13 in the first set after an ace from Makenna Thomas, and after Beebe cut the lead to 18-17, Siloam Springs pulled back in front 21-18. The Lady Badgers scored seven of the next eight points to rally for the win, capped off by a pair of kills from Wilson and an ace from Lawrence.

The Lady Panthers had game point in the second set 24-23. Lawrence, however, reeled off three straight kills to give Beebe the 26-24 victory.

"Mikayla, she's our senior team captain," Beebe coach Audra Higgins said. "Her IQ on the court is extremely high as far as the game of volleyball, and she's probably one of the most athletic girls I've ever coached, and I've coached club, nationals, high school. She's extremely coachable but she has that tenacity about her that she wants to compete. And when it's crunch time, she's going to be the one."

Trying to stay alive, the Lady Panthers took a 14-11 lead in the third set when they hit a Beebe wall. The Lady Badgers scored the next nine points to take a 20-14 lead and rode that momentum to the sweep.

The Lady Panthers bounced back on Thursday with a 3-1 victory against Alma in a 5A-West Conference match at Charles B. Dyer Arena in Alma.

Harried had two solo blocks, while Conrad, Thomas and Swearingen each had one solo block. Harried and Soucie each had a block assist.

Fullerton and Megan Jackson each had two aces, while Vincent, Thomas and Kelly each had one.