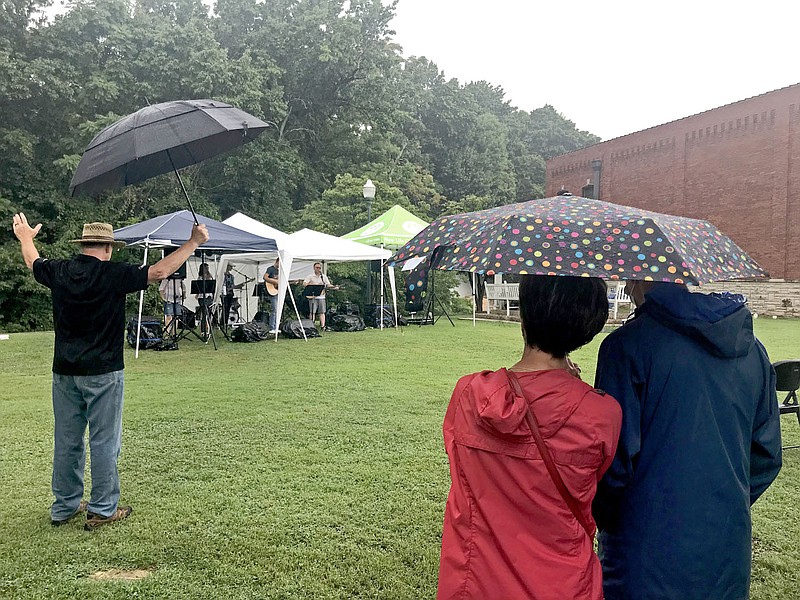 Janelle Jessen/Herald-Leader Audience members took shelter under umbrellas and tents as they listened to a local church perform during the Let Us Worship event in Twin Springs Park on Friday morning. A larger crowd was expected during the Sean Feucht concert in the evening, after press time.

Organizers of a Christian concert on Friday in downtown Siloam Springs said they would follow all state safety recommendations for large gatherings, even though state directives don't apply to worship events.

The 12-hour Let Us Worship event took place from 9 a.m. to 9 p.m. in Twin Springs Park and included performances by local Christian musicians and several churches, culminating with a Sean Feucht concert in the evening, according to organizer Todd Varnadoe.

On Friday morning, the event was moving forward despite rainy weather and a handful of audience members were taking shelter under umbrellas or tents as they listened to musicians perform. Caution tape was set up around the park so that entrances and exits could be monitored, a sanitation station with hand sanitizer and face masks was placed near the entrance and at other locations, and covid-19 safety signs were posted throughout the park.

More people were expected during Feucht's concert on Friday evening after press time.

The event received a letter from the Arkansas Department of Health on Thursday, stating health directives do not apply to places of worship and a safety plan is not required for the event. However, the letter did include a list of safety recommendations for participants, including wearing masks and staying 12-feet apart while singing.

"We appreciate you being forward thinking and proactive concerning our state's ongoing public health emergency resulting from the covid-19 pandemic," stated the letter, signed by Jeff Jackson, ADH environmental supervisor for the retail food section.

Gov. Asa Hutchinson also mentioned the event in his daily press conference on Thursday in response to a question. The state gives guidance to churches but does not give edicts, he said.

"We appreciate a church running a plan by the department of health and want to make sure that they have a plan that is safe for everyone that wants to attend," Hutchinson said.

Varnadoe said the event would be following all of the safety and social distancing recommendations and directives, including making masks available, recommending masks inside the park, and monitoring entrance and exit points.

The event received approval from the city to host up to 1,000 people in Twin Springs Park, according to Don Clark, Siloam Springs community development director. The city has been issuing special event permits following the governor's directives allowing 66 percent capacity at large events with safety measures in place, although directives do not apply to worship events, Clark said. He estimated that 66 percent capacity of Twin Springs Park would be 1,300 people.

Feucht, the featured performer, is a missionary, artist, speaker, author, activist and the founder of worldwide movements, his biography states. He made an appearance on Fox News on Thursday to speak out for the right to hold worship gatherings in California and has been involved in a series of Let Us Worship protests in California.

Because Arkansas is under different circumstances, the event in Siloam Springs was not a protest, but rather a peaceful assembly to worship, Varnadoe said. He hoped the event, which is not sponsored by any one church, would "unite the body of Christ," change the atmosphere and provide a blessing over the town, he said. 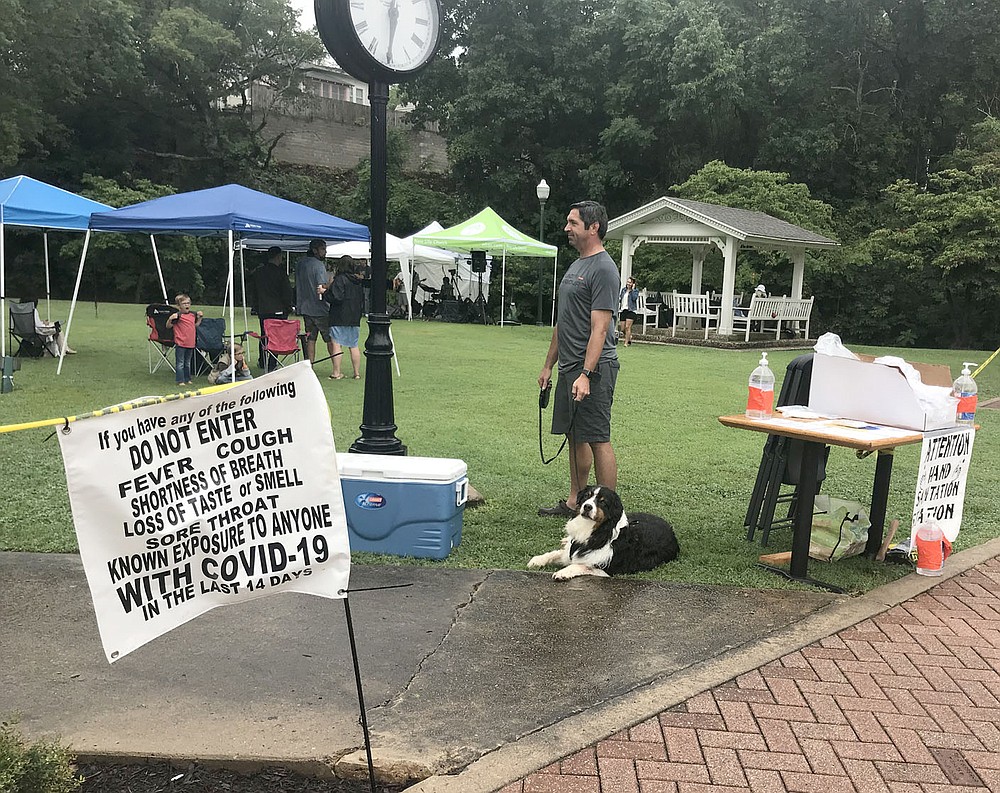 Janelle Jessen/Siloam Sunday Organizers followed safety recommendations from the Arkansas Department of Health during the Let Us Worship event in Twin Springs Park on Friday, including putting up caution tape around the park so that entrances and exits could be monitored, placing a sanitation station near the entrance at at other locations, posting covid-19 safety signs throughout the park, and recommending audience members wear masks.
ADVERTISEMENT