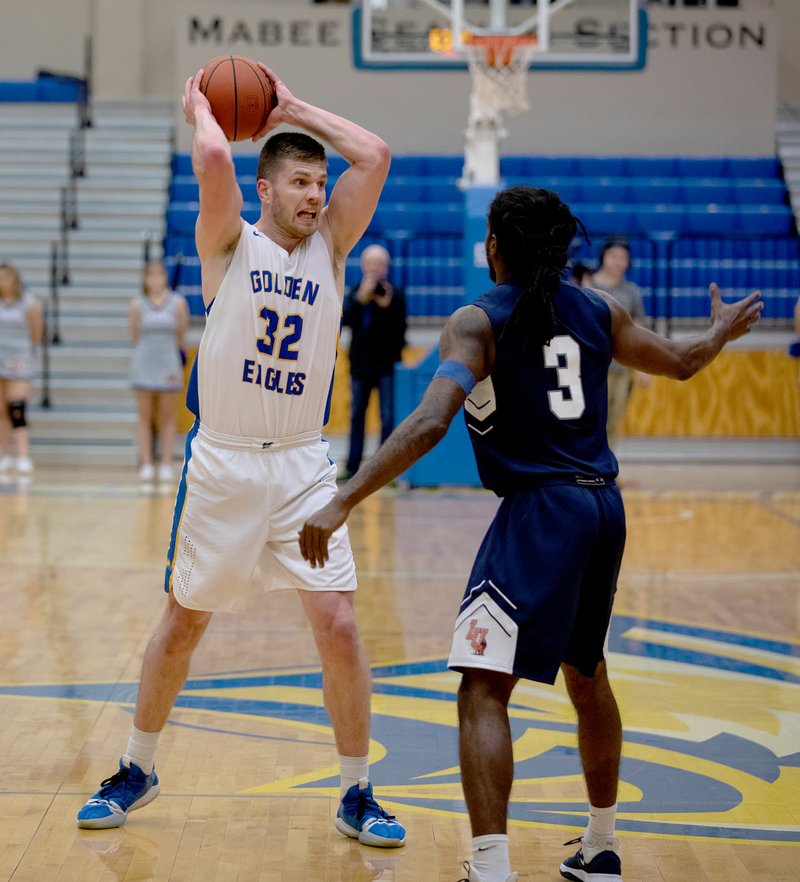 Luke Harper just happened to be in the right place at the right time Thursday night.

And he did it not once, but twice.

The sophomore guard hit a 3-pointer to give John Brown's men the lead for good, then he blocked a potential game-tying 3-point attempt as time expired as the ninth-ranked Golden Eagles claimed a 77-74 double-overtime victory over upset-minded Langston during Sooner Athletic Conference action in Bill George Arena.

"I said to coach (assistant Tim) Kisner at the end of regulation that Luke had some tough moments and wasn't always making great plays," John Brown coach Jason Beschta said. "I looked over at him and said this was the time when Luke takes over and tends to make plays. He said let's get him out there.

"He has such confidence, and we have such confidence in him. He's made a lot of big plays for us in the past, and I thought our guys stepped up with the little things we needed."

Quintin Bailey added a layup to make it a three-point lead, then Densier Carnes followed a Lion bucket with one of his own and made it a 77-74 game with 1:55 remaining. Langston then missed two chances to tie the game in the final seconds, but Harper denied the second one when he solidly blocked John Godwin's attempt as time ran out.

"Honestly, my teammates did a great job besides that," Harper said. "Those were plays that just happened. They carried the thing. Everybody else did a great job, and I stepped up when I had to.

"I just saw one of our crash the boards, and it was a huge play. I realized I was open, so I just called out for the ball. I didn't think about it; I just shot it and it went in. On the block, I saw there wasn't any time left, so I knew the guy had to shoot. I just went up and blocked it because he had no other option. I got all of it -- a solid block. Got a good piece of it."

The victory caps a stretch where John Brown played four games in eight days. The Golden Eagles now get some time off before their next game, which takes place Thursday at Oklahoma City.

"I think we're exhausted," Beschta said. "I know the coaches are, and we're not even out there on the floor. To battle as we did through this four-game stretch in eight days, with going from prep time to game and prep time to game, we were gutting it out. We made some big plays throughout this stretch, and it was no different here.

"Everything starts running together at the time you get to this point. I couldn't even remember how many overtimes we had played. There is a well-earned rest ahead of these guys and this coaching staff so we can refocus and get ready to push forward and finish out strong."

Carnes had 24 points and 12 rebounds -- his 11th double-double of the season -- to lead John Brown, who won't play again until Thursday at Oklahoma City. Harper was next with 14, followed by Rokas Grabliauskas with 12 and Kiree Hutchings with 11. David Hunt II led Langston with 16, followed by Godwin with 15, Latarius Lloyd with 13 and Andrew Reddick with 12.

Harper finished the contest 6-of-8 from the floor, 2-of-4 and 11-of-11 from the free-throw line. The visitors combined to net 31-of-35 chances at the foul line and forced three Tiger foul-outs.

Besides Harper's ninth 20-point outing of the season, senior Quintin Bailey was unstoppable in the first half, hitting 5-of-5 from the floor and added four rebounds. He would eventually finish a perfect 8-of-8 overall before fouling out. Junior Densier Carnes scored seven of his nine from the free throw line while junior Rokas Grabliauskas added seven.

John Brown got a big lift from its bench, which produced 25 points, as freshman James Beckom and freshmen Nemanja Obradovic and Nathan Stolz all contributed six points in the win.

Isaiah Rivera scored a team-high 12 points for the Tigers, while Darrell Bryant added 10 off the bench. The John Brown defense held Central Christian's leading scorer T.J. Williams to just seven points. He had averaged over 13 per game entering the night.