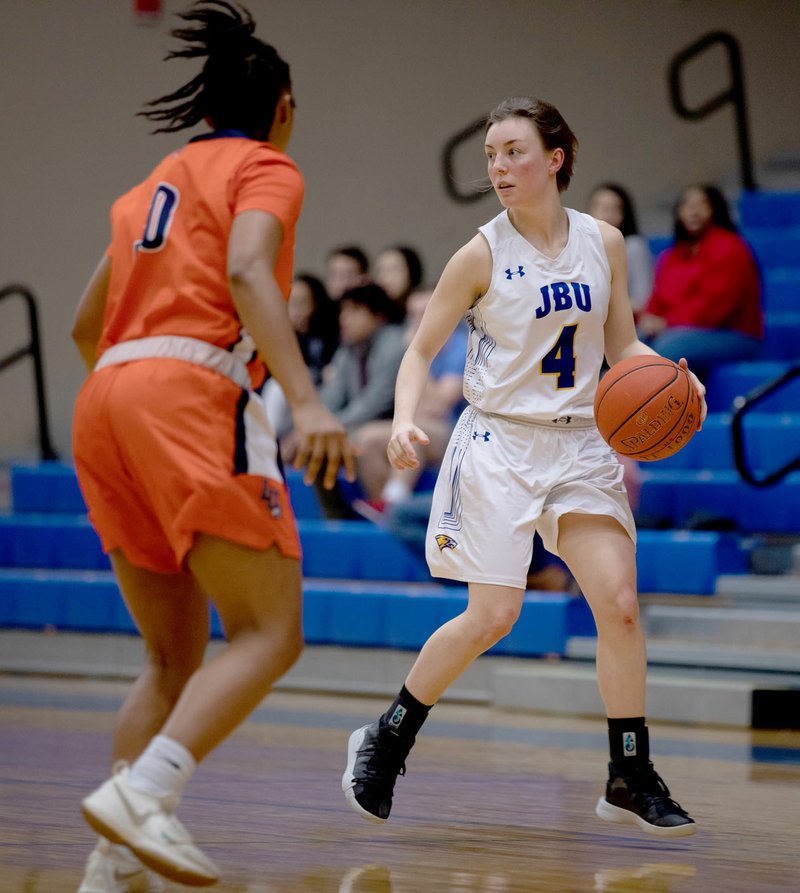 Taylor Fergen was determined to have John Brown's women enjoy their second victory in three nights.

The junior guard scored nine of her team-high 15 points in the final 3 minutes and fueled a late 15-6 run as the Golden Eagles claimed an 84-79 victory over Langston during Sooner Athletic Conference basketball action Thursday in Bill George Arena.

"It was hard for (Fergen) because she got in foul trouble," John Brown coach Jeff Soderquist said. "When you get in foul trouble, you have to sit and you kind of get out of rhythm. But I thought she did a good job of finishing the game."

Fergen tied the game again at 75 with a bucket after Langston took the lead again with Jailynn Lawson's two free throws, then her 3-pointer with 1:31 left gave John Brown a 78-75 cushion. The Golden Eagles never let that lead go as Marta Matamala and Sara Williams each hit two free throws, then Fergen closed out the scoring after the Lions pulled within 82-79 on Talia Edwards' bucket with 21.9 seconds remaining.

"We just had a good team effort," Soderquist said. "We had five players in double figures, and we had scoring off the bench. I thought it was just that good team effort.

"We finished by hitting our free throws. Whenever you get in that situation, you want to hit free throws. We executed well, and we did a good job late of building our defense inside-out and rebounding."

John Brown fell behind early because of Langston's ability to crash the offensive boards and pick up second-chance points. The Lions picked up 13 of their 19 first-half rebounds on their end of the court and led by as many as 10 points before owning a 42-35 halftime cushion.

Edwards had a double-double with 26 points and 11 rebounds for Langston, followed by Lawson with 13 and Asheika Alexander with 12.

McPHERSON, Kan. -- Behind a blistering 69 percent shooting effort in the third quarter that saw the Golden Eagles post 31 points in 10 minutes, the John Brown University women's basketball team picked up an 80-62 win over Central Christian (Kan.) on Tuesday night inside Alexander Arena.

Freshman Jessica Goldman scored a career-high 11 points off the bench, underscoring a Golden Eagle scoring effort that produced five double-digit scorers as the visitors sank 13 triples and broke open a four-point game at the intermission.

Junior Taylor Fergen scored 12 of her team-high 15 points in the second half and added a team-best seven rebounds while sophomore Marta Matamala connected on four triples to produce 14 points. Freshman Tarrah Stephens scored 13 and sophomore Haley James posted 12 points and five rebounds off the bench to round out the Golden Eagles' top scorers.

Hounded by 11 turnovers, John Brown took a narrow 30-26 lead into halftime, but the visitors erupted with a 31-15 scoring advantage in the third to build a game-high 23-point lead early in the fourth quarter.

Holly Golden's 16 points led all scorers as she nearly finished with a double-double by grabbing nine rebounds for Central Christian. Tania Lowe and Kassidy Forsberg each notched 12 points in the loss.