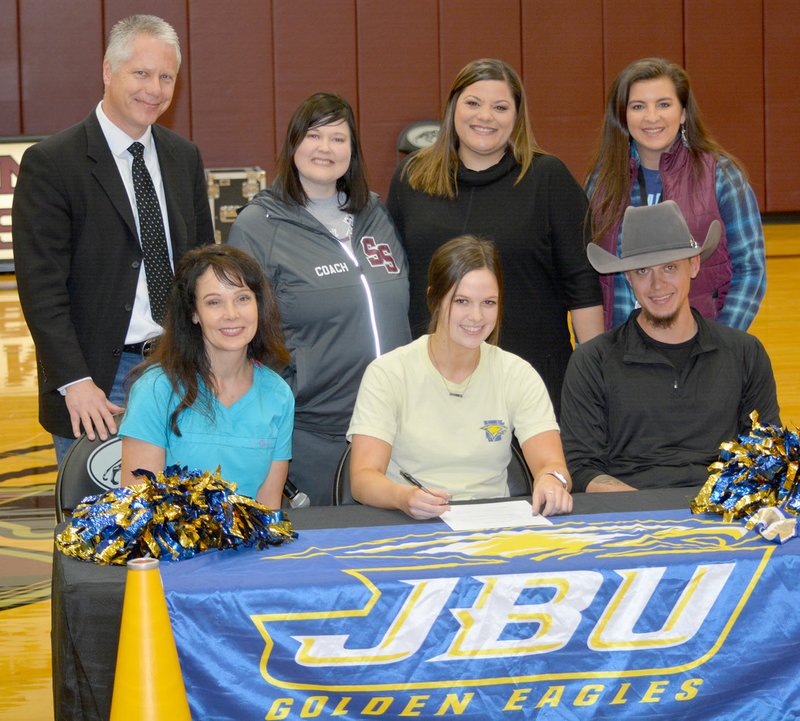 Seniors Bliss Wisdom and Rachel Robbins both are looking forward to continuing on as cheerleaders after spending their high school careers on the ultra-successful Siloam Springs cheer team.

"Bliss has been cheering since eighth grade for Siloam Springs," Clement said. "I know she has had lots of other interests as well, but she has stayed with cheer and we are so happy that she has. Like I said, the growth that I have seen in her in high school, her confidence and especially this year, it's just blossomed, and it's been really cool to see that with Bliss. I'm excited for her to go cheer at JBU and stay local so that we can see her and go to the games and see what she can accomplish there.

"Rachel, she moved here as a freshman. Ever since then she's been on the cheer team. She has been an awesome sideline cheerleader and also been on our competitive team. She was on our competitive team last year when we got state runner-up and with us this year when we got third place. She has contributed in every way -- leadership wise, strength wise, she's amazing stunter. Like I said, she's a good leader, but she's also a good follower and a great teammate. So I'm excited to see her cheer at JBU."

At JBU, both Wisdom and Robbins will be under the leadership of Elicia Williamson, who also helps out with the Panthers cheer team.

Wisdom gave credit to her coaches for encouraging her along the way.

"I think you guys have pushed me a lot to continue cheering and stuff like that," Wisdom said. "It's never been my No. 1 priority but I have fun with it. Continuing at JBU will be like still staying in the (SSHS) program."

Robbins moved to Siloam Springs from Mena but she had previously worked with Williamson in All-Star competitive cheer.

"I cheered for Elicia through All-Star for a really long time now," Robbins said. "So I already knew her and I really, really like the way she coaches. She's also helped out with our competitive team some, so I don't really feel like I'm leaving like our program as much. I just feel like I'm continuing on."