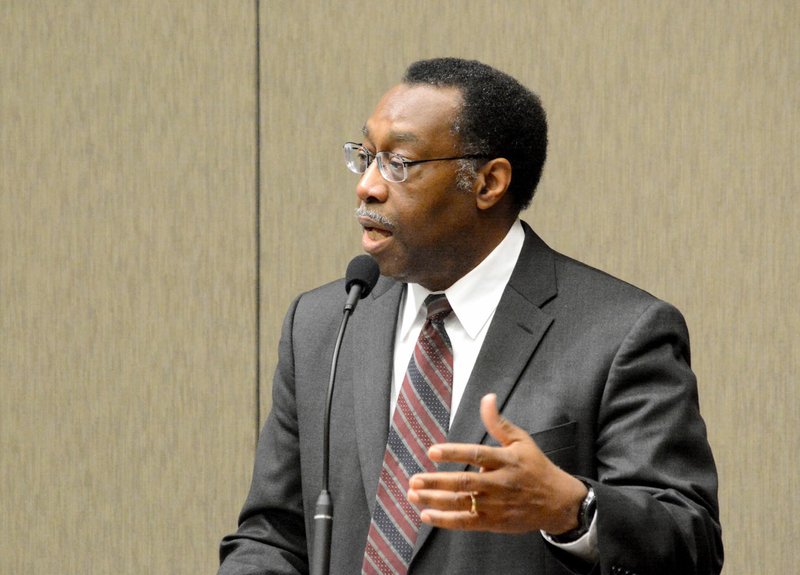 Chief Judge Lavenski Smith called on people, whether or not they are in the legal profession, to treat others fairly and equally "without respect to persons," during his speech at John Brown University on Feb. 4.

He defined "without respect to persons" as not giving favor to some and disfavor to others based on the subclass of people they may be categorized in, sharing quotes from the Bible, the U.S. Constitution and the oath he took as a federal judge to make his point.

"We should respect all people, but give no prejudicial regard to their economic or social status," Smith said. "Impartiality is where love and the law meet."

Smith, who is the Chief Judge of the U.S. Court of Appeals for the Eighth Circuit, was the 2020 speaker for the Barnett Civic Leadership Series, funded by the Barnett family and other donors. The series brings a speaker to JBU each academic year to focus on Christian leadership and the intersection of faith and public service, according to a press release from the university. Previous speakers have included Alveda C. King, niece of Dr. Martin Luther King Jr.; Shapri LoMaglio, vice president for academic affairs and executive programs at the Council for Christian Colleges & Universities; former Gov. Mike Huckabee; and Arkansas Gov. Asa Hutchinson.

Smith is an Arkansas native, who was born and raised in Hope and earned both his undergraduate and juris doctorate degrees from the University of Arkansas. Smith is also a former JBU professor and board member. He served on the Arkansas Supreme Court from 1999 to 2000, according to the Federal Judicial Center. He was nominated to the federal bench by President George W. Bush in 2001 and began serving in 2002 then became Chief Judge in 2017, the center's website states.

In addition to speaking on Tuesday evening, Smith also visited several classes and spoke to students.

Principals of law have to be based on things that are solid, secure and true, Smith said. Ideas that are fundamentally true do not change and are often apparent from a very young age, he said.

"Fairness, principals of equality, are things that children rarely have to be taught," he said. "You have to unlearn them to become a tyrant."

The American ideal of equal justice under the law is emblazoned on the edifice of the highest courts and is a highly admirable principal, but it is empty if Americans do not make it a reality rather than just a nice slogan, Smith said.

The U.S. Declaration of Independence highlights the inalienable rights of life, liberty and the pursuit of happiness, but it did not initially protect the rights of all who came to the country's shores, he said. The words lost their power through the redefinition of slaves as less than fully human, he said. The debate continued through the Civil War and on into segregation, he said.

"Once we place ourselves on the common plain of personhood, we should desire no benefit in law that we would deny any other person," Smith said.

Smith also spoke about the importance of showing respect to others, a concept he said children first learn at home from their parents.

"Thankfully, learning respect and giving respect produces greater respect," Smith said. "If I respect you and you respect me, we can learn from each other, improve ourselves collectively and order our society in such a way that is beneficial to each other and people at large."

People have a tendency to notice the differences in others, whether it be external appearance, occupation, hairstyle, clothing or style of dress, and treat those distinctions as categories, Smith said.

Justice should be administered without respect to persons, Smith said. The lessons people learned as children regarding respect for authority and for others should never be forgotten or become jaded cliches, he said. Those in the legal profession should seek to advocate and adjudicate applying the law alike to all, he said. The same ideas also apply to those who aren't in the legal profession, he said.

"We need to make sure in our daily interactions we are treating people the way we want to be treated, and that we encourage laws to do the same, and we encourage those we promote in positions of public authority to do the same, to not play favorites on the playground as we used to say, but to do things justly," Smith said.