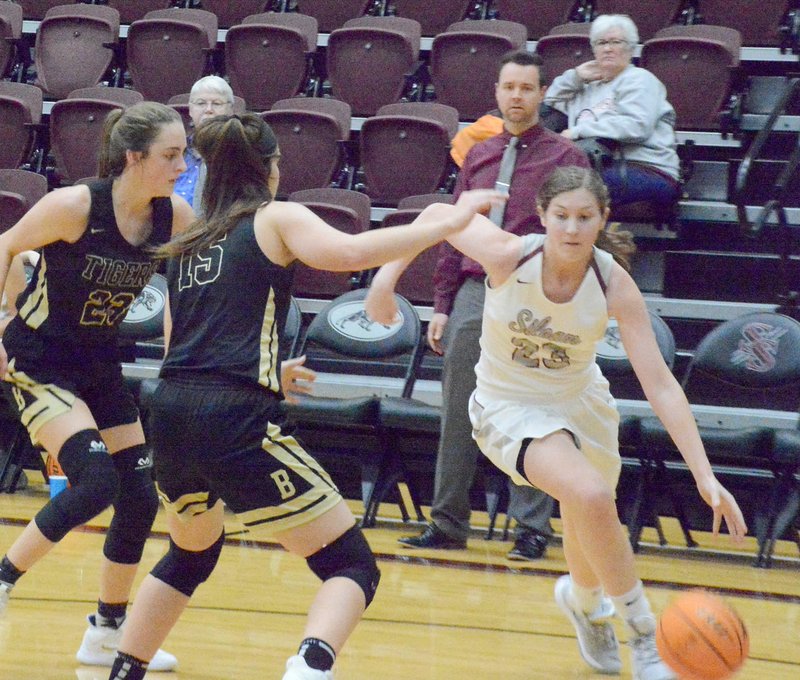 Siloam Springs' ninth-grade girls are in the midst of a memorable season, but the Lady Panthers came up on the short end Monday night.

Bentonville opened up a large first half lead and held off a second-half Lady Panthers charge for a 47-37 victory in a matchup of two undefeated teams in conference play at Panther Activity Center.

The Lady Tigers (16-2, 7-0 Northwest Arkansas Conference) led by as many as 17 points in the first half, but Siloam Springs (16-4, 7-1) had cut that deficit down to four early in the fourth quarter.

Siloam Springs struggled all night keeping Bentonville off the offensive glass, and it played big down the stretch.

Leading 37-33, Bentonville missed a shot but the Lady Tigers got an offensive rebound and found Ella Campbell for a big 3-pointer and a 40-33 lead. The Lady Tigers then hit 7 of 8 from the free-throw line to finish off the Lady Panthers.

"We got some momentum in the second half by giving more effort on the defensive end and that translated, obviously, into some offensive buckets," said Siloam Springs coach Daren Ward. "But we really struggled to rebound the basketball tonight and that was the biggest key of the game, giving them second and third opportunities to score."

Siloam Springs trailed 27-11 at halftime but outscored Bentonville 18-8 in the third quarter to get back in the game.

Sophie Stephenson and Mimo Jacklik each hit 3-pointers, while Jacklik, Brooke Smith and Brooke Ross all had buckets in that stretch. Jacklik's 3-pointer at the end of the third quarter made it 35-29.

Smith and Ross each finished with 10 points, while Jacklik had eight, Stephenson six, Cailee Johnson two and Rachel Rine one.

The Lady Panthers are back in action at home Thursday against Arts Academy before finishing up the conference slate with Fayetteville Purple on Feb. 17 and Feb. 20 at Springdale Central. Then the Lady Panthers are likely to have qualified for the Northwest Arkansas/River Valley Regional Tournament.

"The sky is the limit for them," Ward said. "They work so hard and they want it more than any group I've had in a long time. They put in their time every day in the gym to get better. I mean we have to run them out of the gym. That's a good thing. We want them there all the time. They enjoy being around each other. You can see how they feed off each other when they play. It's a really special group."

The Siloam Springs ninth-grade boys cut Bentonville's lead to 36-34 at the end of the third quarter after a basket from Dalton Newman.

But the Tigers outscored the Panthers 17-4 in the fourth quarter to pull away for the victory.

Siloam Springs roared out to an early 11-4 lead midway through the first quarter after baskets by Levi Fox and a bucket and trey from Newman.

Bentonville cut the Panther's lead to 11-9 after the first quarter and rallied to take a 21-16 lead at halftime.