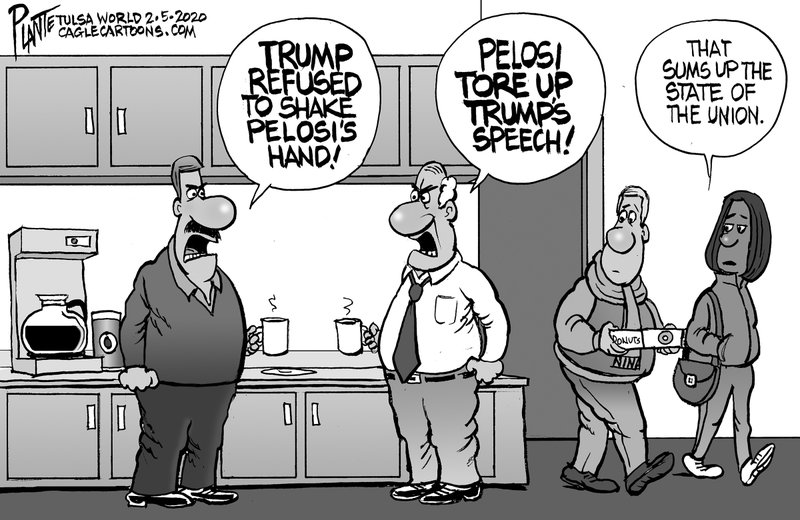 I was mulling over President Trump's remarks at the National Prayer Breakfast last week, which occurred after Trump had been acquitted by the Senate following his impeachment. It was a foregone conclusion that Trump would not be removed from office and he knew that quite well. He had no reason to even comment on the proceedings; all he had to do was wait it out.

So, I'm puzzled. Why, in his moment of victory, couldn't Trump take the high road and rise above the fray? He has plenty of support from the sycophants in the Senate, let them do the dirty work of beating up the opposition. This was an opportunity for Trump to exhibit grace, extend an olive branch and be the bigger man. It would also make the Democrats look even more foolish and small.

But, no, Trump has no desire to unite. He wants vengeance. He wants to punish those who dare question his motives and actions. Grace and humility are for the weak. The keynote speaker at the Prayer Breakfast, Arthur Brooks, called for all present to love their enemies, not merely tolerate them, and to reject contempt, stop the sarcasm and stand up for goodness and truth. President Trump spoke next, saying that he did not agree with Mr. Brooks. He dislikes people using faith to justify their wrong actions. He doesn't like people saying, "I'm praying for you," because he knows they aren't really doing so. Evidently, Trump has unique insight into the hearts of others.

Contrast Trump's statements with those made by Mitt Romney just prior to the Senate vote. Romney said he would vote to convict Trump on one of the House charges; abuse of power. The guiding force behind his reasoning, he stated, was his religion and the fact that he swore an oath before God. Say what you will about Romney's past actions and motives, personal and political, but the man was obviously emotionally moved during his explanation.

Brian Kilmeade of Fox and Friends oozed contempt for Mitt Romney for "bringing religion into impeachment," stating that religion had nothing to do with it. He doesn't believe that faith can drive actions, exhibiting the cynicism so prevalent today. Honestly, I was amazed at Romney's actions. He had nothing to gain by going against his party's wishes. He knew he would be a target for Trump and his cult-like followers. He knew his vote would make no difference in the outcome of the trial. But, regardless how you view his religion, he expressed that his actions were entirely guided by his faith and by what God demanded of him. Romney knew he would pay a huge political price for his actions, yet he still voted his conscience.

Trump went on an hour-long rant the day following his acquittal, calling those who opposed him "evil and sick people" and reiterated that he was fully exonerated, which he was not. He then wallowed in self-pity and described how unfairly he had been treated by "dirty cops," and "it was all leaks and liars." No president had ever suffered as much, he whined, along with some profanity. I guess someone forgot to put on their big boy pants. I thought only "snowflakes" played the victim card.

With the divisive diversity of the Democrat's primary process on full display, one would think that Trump should have a fairly easy path to re-election this November. How refreshing it would be if Trump decided to unite the nation, not bend it to his will. He is hell-bent on seeking retribution, not regeneration. A bigger man would seek the guidance of those, such as Romney, who listen to their hearts, for Trump hears only silence from his own.