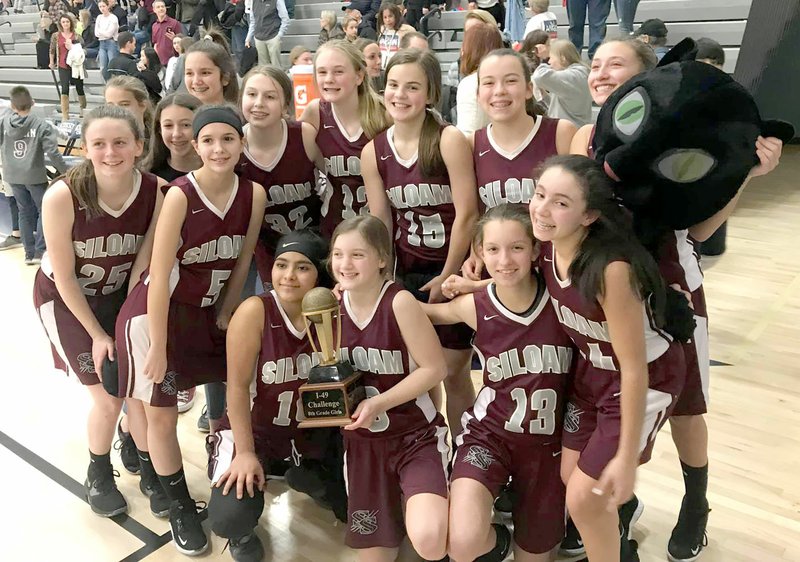 Photo submitted The Siloam Springs eighth-grade girls defeated Rogers Kirksey 35-33 on Thursday to win the I-49 Challenge at Rogers Elmwood. The Lady Panthers, as the sixth seed, also won games on Tuesday and Wednesday to earn the championship.

Addison Pilcher hit two free throws with one second remaining to lift the Siloam Springs eighth-grade girls to the I-49 Challenge championship on Thursday afternoon with a 35-33 victory over Rogers Kirksey at Rogers Elmwood Middle School.

It was the third straight win in the tournament for the Lady Panthers (8-11), who defeated Rogers Lingle on Tuesday and Rogers Elmwood on Wednesday.

The Lady Panthers trailed 10-3 after the first quarter and 19-15 at halftime. Kirksey took a 27-21 lead into the fourth quarter, where Siloam Springs outscored Kirksey 14-6.

Chaney Stanaland led the Lady Panthers with 16 points, while Isabella Anglin-Rovira and Emily Keehn each had six, Pilcher three and Ellen Slater and Lexi Masters each with two.

The eighth-grade girls defeated Lingle 36-22 on Tuesday. Stanaland led with 16 points, while Masters had 10, Keehn six and Slater and Anglin-Rovira each with two.

In Wednesday's 27-24 win over Elmwood, Stanaland scored seven, while Slater had six, Pilcher, Anglin-Rovira and Masters each had four and Keehn two.

The eighth-grade boys' season ended Wednesday with a 24-22 loss to Springdale George in the semifinals of the I-49 Challenge at Rogers Kirksey.

Mason Simmons led the Panthers (10-8) with 11 points, while Nate Hawbaker had eight and Nolan Wills three.

The Panthers defeated Rogers Oakdale 28-15 on Tuesday in their opening game of the tournament.

The Siloam Springs ninth-grade girls wrapped up their regular season Wednesday night with a 60-23 rout of Springdale Central.

The Lady Panthers finished the regular season with an overall record of 19-4 and 9-1 in Northwest Arkansas Conference play.

Siloam Springs will continue its season Monday in the Northwest Arkansas/River Valley Region Tournament, and the Lady Panthers will be the NWA Conference's No. 2 seed.

On Wednesday, Siloam Springs led 27-12 after the first quarter and 44-16 at halftime, before pulling ahead 58-20 going into the fourth quarter.

Brooke Ross led Siloam Springs with 17 points, while Brooke Smith had 12, Mimo Jacklik 11, Sophie Stephenson eight, Rachel Rine and Cailee Johnson each with four and Anna Wleklinski and Faith Ellis each with two.

The Panthers trailed 4-2 after the first quarter and 18-12 at halftime before falling behind 32-14 going into the fourth quarter.

Siloam Springs finished the season with a record of 10-11 overall and 4-6 in Northwest Arkansas Conference play.

Dalton Newman led the Panthers with nine points, while Nathan Vachon had six, Camden Blackfox two and Levi Fox and Samuel Herndon each with one.