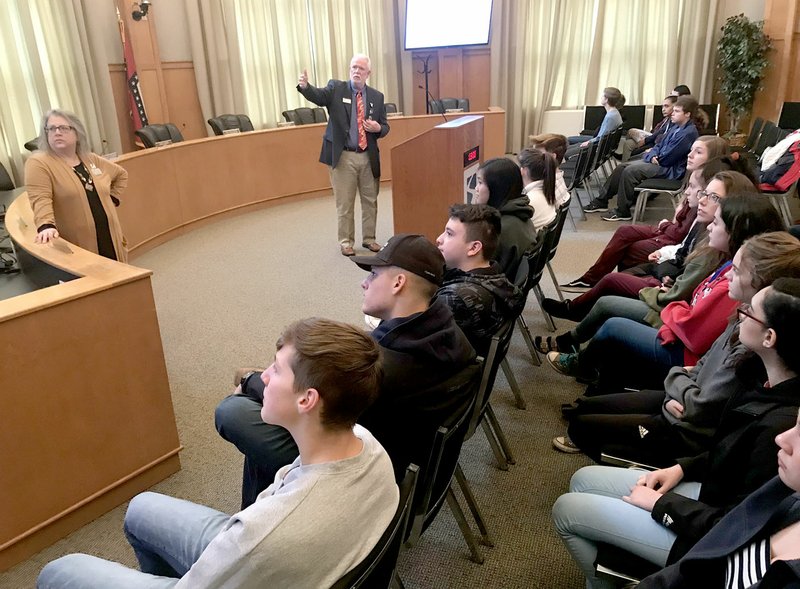 Siloam Springs High School students got a firsthand look at local government during a visit to city hall on Dec. 17.

Michele Jackson's civics class, which includes students in ninth through 12th grades, visited the city board room and heard a presentation about municipal government from city Administrator Phillip Patterson and city board member Marla Sappington.

The field trip was a first for Jackson's class and Patterson's willingness to take time for students spoke volumes to them, she said.

"I really feel (Patterson) did a great job in letting (students) know they are the future of Siloam Springs and they are the ones who are going to be sitting in the directors' seats so it is important to pay attention to what is going on so they can have a voice and participate in city government," she said. "I also appreciated Marla being there, and I knew she would relate well to them and I felt like she did."

It's one thing for students to study how the legislative branch in Washington, D.C., works, but they also need to know their vote counts more on the local level and they have more power on the local level of government, Jackson said.

"It is a valuable lesson on civics, and their rights and responsibilities as a citizen," she said.

Sophomore Laurel Granderson said the trip brought a sense of reality to the lessons she is learning in civics class.

"I can see it happening instead of just hearing about it. ... I really like knowing what is going to happen, I want to know how it is going to affect me and I want my voice to be heard," she said.

Patterson said it is the first time during his tenure that students have visited city hall on a field trip. Whether students are interested in becoming a board member or just learning how they city works in general, it is positive, he said.

"Anytime we can get the younger generation interested in municipal government at an earlier age, I think it's great," he said.

Sappington, who is a former educator, said Patterson did a good job with presenting the information on students' level. Students may know that city hall is where their families pay the electric bill, but they probably don't know everything else that goes on in the administration building, she said.

"I feel like it's a hands-on experience and we need that so much more for them to actually see what happens here," she said.

The mock trial project is a long-standing tradition in her class, Jackson said. It gives students first-hand knowledge of the process, their rights as an accused and how the U.S. Constitution affects their life, she said.

Students do extensive research to prepare them to play all of the roles in the trial, including the prosecuting attorney, defense attorney, witnesses, police officers, judge and jury, she said.

Each year students try the same case, focusing on a man who is accused of contributing to the delinquency of a minor and second degree manslaughter after a girl who has been drinking and partying at his house is found dead near the railroad tracks. The outcome of the trial is different each time, she said.

Courts manager Sandy Luetjen and Judge Stephen Thomas are both generous with their time, Jackson said. Luetjen spends a lot of time explaining how the courts work and Thomas even allows a student to wear his robe for the trial, she said.

"I just always think getting them out of the classroom and letting them interact with their community in a positive way is the best way to teach content that might be kind of boring to them," Jackson said.