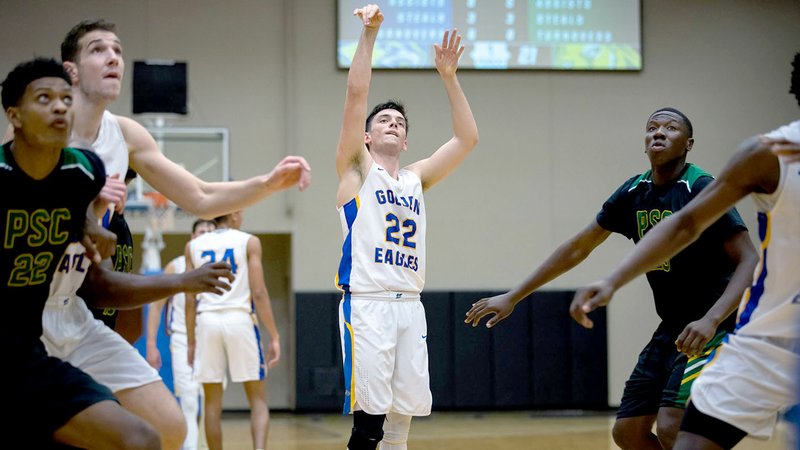 SILOAM SPRINGS -- John Brown's men basketball team ended 2019 on a sour note with its lowest offensive production and suffered its first loss of the season as a result.

It almost appeared the second half of the season would start in a similar fashion Thursday night. The Golden Eagles, however, relied on their defense until they regained their shooting touch and claimed a 70-55 victory over the University of Science and Arts of Oklahoma during Sooner Athletic Conference play inside Bill George Arena.

John Brown (12-1, 3-0), ranked 10th in the latest NAIA poll, outscored USAO 36-18 over the final 12 minutes to claim the victory. The Golden Eagles, meanwhile, shut down the high-scoring Drovers and allowed the second-lowest point total of the season.

"One of the things we think is important for this team -- and we did it through the first semester, with the exception of the last game -- was find different ways to win," JBU coach Jason Beschta said. "We shot 33 percent from the floor, but we outrebounded them by nine and had only seven turnovers.

"And we guarded. This is a team that averages around 90 points per game. To hold them to just 55 points, that's a pretty impressive feat for our guys to be able to do that."

John Brown hit only 10 of 34 (29.4 percent) of its shots in the first half, but only trailed 25-24 at halftime and missed a go-ahead 3-pointer with only seconds left. The Golden Eagles regained the lead on Nemanja Obradovic's putback in the opening minute, which led to four lead changes early in the second half.

USAO (6-7, 1-2) then scored six-straight points and claimed a 37-34 lead on Gerard Makuntae's two free throws, but the Drovers went more than 6 minutes without a bucket. That was the break JBU needed as Kiree Hutchings hit four straight points for a 38-37 lead with 11 minutes, 23 seconds remaining.

After the Drovers tied it with a Trenton Sandifer free throw, Rokas Grabliauskas and Densier Carnes hit back-to-back 3-pointers and gave JBU the lead for good. Luke Harper, who led the Golden Eagles with 21 points, hit a trio of 3-pointers to help JBU extend its lead to a 57-43 margin with 2:43 remaining, then the Golden Eagles used free throws to keep their lead out of reach with accurate free-throw shooting.

"I think we found some good looks and just not hitting," Beschta said. "But again, we were finding those different ways to win. At halftime, we had 0-for-0 at the foul line, and we were 19 of 27 in the second half. We got to the line and found ways to get some high-percentage shots, and we made some things happen.

"Our guys can get going at times. Luke, we found him for some open looks, and he can shoot the ball so well. Him hitting some 3-pointers in the second half was huge for us. He got hot, and that turned a one-possession game and ballooned it out to double figures."

Grabliauskas added 14 for JBU while Hutchings chipped in 11. Stephon Hall led USAO with 13 while Sandifer and Dylan Causwell had 11 apiece.