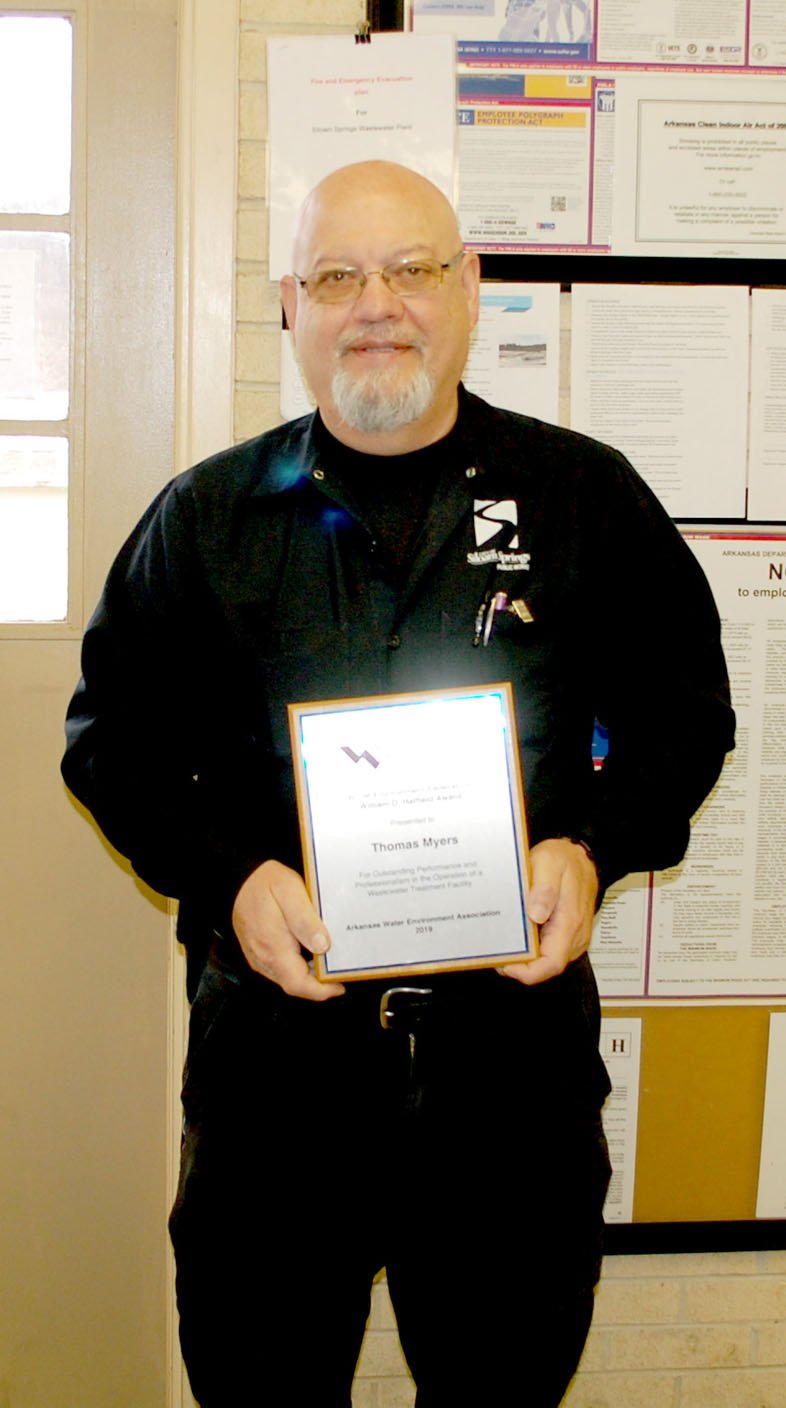 Marc Hayot/Herald Leader Tom Myers poses with the William D. Hatfield Award from the Arkansas Water Environment Association. Myers received the award in May of 2019.

Tom Myers, wastewater superintendent for the city of Siloam Springs, was featured in the January issue of TPO (Treatment Plant Operator) magazine.

Myers was selected for the story because he won the William D. Hatfield Award in April 2019, according to Ted Rulseh, editor of TPO magazine.

"It's kind of like the Oscars in this industry," Rulseh said of the award.

Myers, who has worked in the wastewater industry for more than 40 years and has served Siloam Springs since 2002, said he was honored to be featured in the magazine.

TPO is a national trade magazine published by COLE Publishing Inc. of Wisconsin. The article, titled "Tom Myers Thrives on Relationships With Other Operators, Engineers, Regulators and Others," focuses on his ability and desire to communicate with other representatives in the wastewater industry. It also covers Myers' career in wastewater management, the 2009-10 upgrade of the wastewater plant in Siloam Springs and his 2019 Hatfield Award.

"Throughout the years (Myers) has thrived on relationships with counterparts in other communities, members of his own team, engineering firms, state lawmakers and regulators, and representatives of industries that send pre-treated wastewater to his treatment plant," the article states.

The award was established in honor of Dr. William D. Hatfield, who was the Superintendent of Decatur, Ill., Sanitary District, according to the WEF website. Hatfield was president of the Central States Sewage Works Association 1944-45 and served as president of the WEF in 1958-59, the website states.

The award was presented to Myers by the Arkansas Water Environment Association (AWEA) during the organization's state conference, which took place April 29 through May 1. The Hatfield Award is presented at the state level, but is a national award, Rulseh said. The city of Siloam Springs also won the George W. Burke Jr. Safety Award at the conference.

"They only issue just one (Hatfield Award) to an individual in a lifetime, so it's quite an honor," Myers said.

The award shows that Myers is a leader in the wastewater industry, according to City Administrator Phillip Patterson.

"(Myers) is committed to managing the wastewater plant in a professional manner and he is passionate about that industry," he said.

The Hatfield Award comes to Myers after a career of 40-plus years in the wastewater field. Myers said he became interested in wastewater around the time the Clean Water Act was passed in the early 1970s. He explained that as an avid fisherman and hunter, he wanted an environmentally related career.

After graduating from college in 1976, Myers began an internship in Sioux City, Iowa, where he conducted special testing on hydrogen sulfide problems in the municipal collection system, Myers said.

During his internship, Myers said he traced the build-up of hydrogen sulfide to a beef packer in South Sioux City, Neb., whose facility was draining large volumes of blood into the municipal system of both cities because they shared the same water collection system. When the blood decomposed it caused hydrogen sulfide to develop, which caused damage to the infrastructure, Myers added.

From there, Myers worked in Carroll, Iowa, for seven years in the wastewater field before becoming the wastewater superintendent for Preston, Iowa. He would eventually rise to the role of director of public works for that city.

Myers spent 20 years in Preston then decided to head south. He was offered positions in Carlsbad, N.M., Houston and Siloam Springs. He ultimately chose Siloam Springs over the other two cities.

"It was such a beautiful area and such a good Christian area...the quality of life is better here," Myers said.

One of Myers' accomplishments in Siloam Springs was upgrading the wastewater plant in 2009, he said.

One of the challenges Myers faced was keeping the existing plant running while they were building the new plant on the same site. Myers credited Garver Engineers for making sure the city crew could still utilize the other portion of the plant during construction.

Myers also worked with other city staff members to develop a safety manual for all employees.

"When you are a new hire, you receive that little safety booklet," Myers said. "The same one that I established in Iowa, we use here."

Along with his work in Siloam Springs, Myers serves as the safety chair for the AWEA and was an inductee into the Select Society of Sanitary Sludge Shovelers (5S). Individuals are selected for membership on the basis of merit, according to the website for the Federal Water Quality Association.

"It's a group of individuals that have been dedicated to helping the association to sponsor training and educating individuals," Myers said.

Myers said he plans to retire in June.

"I've come to a point of time in my life where I need to take more quality time with my wife and enjoy the rest of my life," Myers said.

Myers did say he would still be involved with the AWEA and has hinted at the possibility of teaching. When asked if there was any advice he would give to the next wastewater superintendent, Myers said to get involved with associations related to water and wastewater, read trade publications and continually go to training.

Myers said he is grateful he had the chance to serve the people of Siloam Springs and the community he loves.

"God has always blessed me and I am proud not only to be a citizen but to represent the taxpayer...we are providing the best service that we can with the funds that are available," he said.