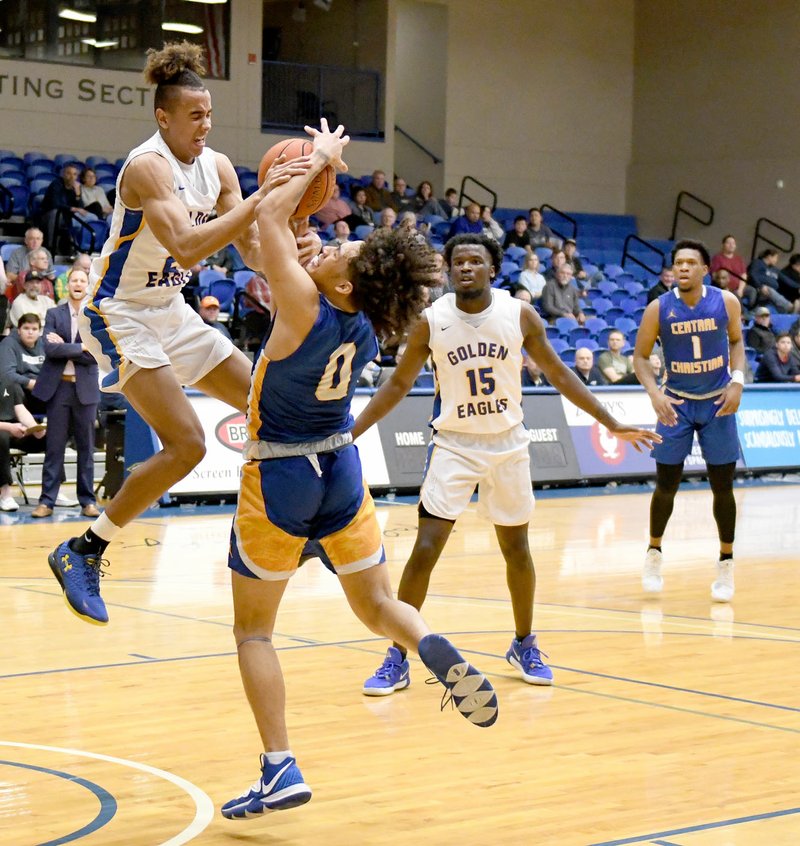 Playing without senior post Quintin Bailey for the second straight game and coming off a disappointing loss at Mid-America Christian last Saturday, the Golden Eagles needed a reminder of their identity.

Coach Jason Beschta thinks they got that in a hard-fought -- though sometimes sloppy -- 67-49 win over the Tigers at Bill George Arena.

"I think we needed to see ourselves remember who we were after that MACU game," Beschta said. "Because they were tougher than us in that. You know coaches love to talk about toughness. We may not be able to say we were tougher than every team, but we've got to be at least as tough as every team we play. We can't let a team eclipse us on that."

No. 10-ranked JBU (13-2, 4-1 Sooner Athletic Conference) showed that toughness on Thursday against the Tigers (7-7, 0-6) as the Golden Eagles held the lead for much of the game.

But it was close for much of the first half.

A long 3-point shot by Central Christian's Andrew Epps pulled the Tigers within 19-17 with 5:17 remaining in the first half. JBU, however, answered with a 14-4 run to end the first half and take a 33-21 lead at halftime.

Luke Harper scored inside and Densier Carnes hit a 3-pointer on the wing to get the lead back to seven points.

Rokas Grabliauskas scored in transition after a Tiger turnover, and Kiree Hutchings hit a deep 3-pointer for a 29-18 lead.

Harper's jump shot at the end of the first half gave JBU the 14-point lead at halftime.

Harper's driving basket extended JBU's lead to 16 points early in the second half.

But the Tigers stayed close, pulling within 43-34 with 11:54 left after a three-point play by Isaiah Rivera. Another sequence, in which JBU had three straight turnovers, allowed Central Christian to stay within striking distance.

"We have got to eliminate the one stretch of three straight turnovers," Beschta said. "Those can't happen. In a close game or against some of the other teams in our league, those are the opportunities a team needs to jump right back in a game."

The Golden Eagles did out-rebound the Tigers 43-25, led by 10 rebounds from Ira Perrier and nine apiece by Carnes and Nathan Stolz, who was in the starting lineup in place of the 6-foot-7 Bailey. Bailey, Beschta said, has a sprained MCL and is likely out the next couple of weeks. JBU's first game without Bailey was last Saturday against MACU.

"(Bailey is) such a tough guy for us and does so much inside and defensive that inside we struggled," Beschta said. "We need guys to step up and be ready when your time is called. So tonight we started Nathan Stolz. We got Densier in some foul trouble in the second half and we got to play some different lineups and different guys. Seeing different guys step up and make some plays -- that's part of what's made us really good. I think we got some guys that we know are our top guys. We need that contribution from different guys ready to step up and help us when we need it."

Defensively JBU held the Tigers to 15 of 44 from the field and 9 of 24 from behind the 3-point line.

Byron Staten and Isaiah Rivera each had 10 to lead Central Christian.

JBU was scheduled to return to action at Langston on Saturday. Results were not available at presstime.

The Golden Eagles play at Southwestern Christian (Okla.) on Thursday before returning home this Saturday to host Oklahoma City.