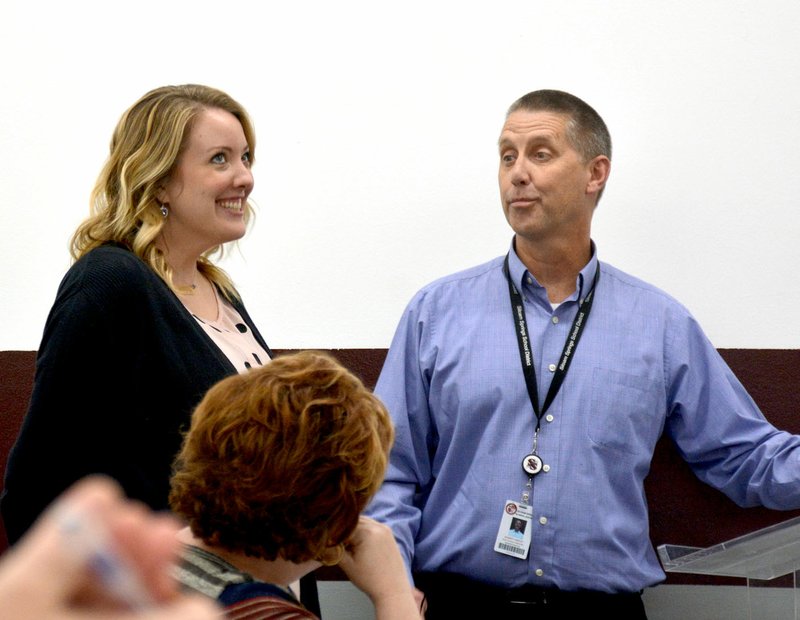 Janelle Jessen/Siloam Sunday High school principal Rob Lindley (right) recognized choir director Julianna Tufts during Thursday's school board meeting for recently being named Arkansas Choral Directors Association Region 6 choir director of the year. Region 6 includes schools such as Rogers, Harrison, Mountain Home, Bentonville, Pea Ridge, Decatur, Flippin and Siloam Springs, he said. Tufts came to Siloam Springs in 2014 and in 2016 the high school had three choirs and 90 students. Since then, Tufts has grown the choral program to five choirs and 190 students and her choirs have consistently had a superior rating, the highest possible, at regional and state assessments, Lindley said.

School board members voted on Thursday to extend Superintendent Jody Wiggins' contract through the 2022-2023 school year.

Wiggins was given a three-year contract when he was hired to lead the school district last spring, which began when he transitioned from assistant superintendent to superintendent on July 1. The motion that passed on Thursday will extend his contract by one year.

"We appreciate Jody's work this year," said Brian Lamb, school board president. "I think he's got some great ideas coming and it's nothing but upward for us."

"I think it's been a really smooth transition and I really appreciate that," Matchell said. "I just see great things from your leadership."

School board members came to the decision after an hour and 40-minute executive session, where they conducted the annual superintendent review, discussed the superintendent's contract and discussed the resignations and hiring of several staff members.

In other business, the school board took the following actions:

• Approved four teachers to work through their preparatory period during the spring semester.