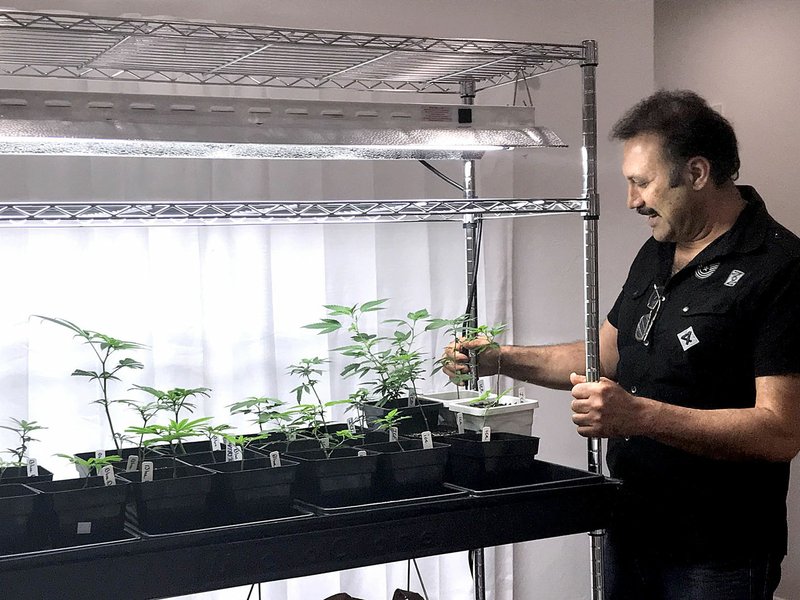 Janelle Jessen/Siloam Sunday Rizwan Ahmad, owner of The ReLeaf Center in West Siloam Springs, Okla., tends to the medical marijuana plants he sells in his store.

City sales tax revenue was flat from 2017 to 2018, increasing or decreasing a steady one to two percent a month when compared to the same month the previous year, according to Oklahoma Tax Commission records. Then in May 2019, sales tax revenue increased 13.5 percent and has been in the double digits ever since. December saw the highest increase of 34 percent.

** The first medical marijuana dispensary in Northwest Arkansas, the seventh in the state, opened in August.

Carr attributes the sales tax revenue growth to medical marijuana. She said she had mixed emotions when medical marijuana was placed on the Oklahoma ballot June 28, 2018, and began to be sold across the state later that year in October 2018, and she is still uneasy. However, the measure passed by a vote of the people so cities and towns need to proceed on and report back to legislators if changes need to be made, she said.

"We have to look at it as an economic development drive for the city, the county and the state," Carr said. "It was a good drive for all three. All three needed a boost."

As of December 2019, the state of Oklahoma has brought in $24.23 million from the 7 percent marijuana excise tax and $30.77 million in state and local sales tax, for a total of $54.99 million in medical marijuana related tax revenue since November 2018, according to the Oklahoma Tax Commission.

Locally, Adair County has 12 medical marijuana dispensaries and Delaware County has 26 dispensaries, according to Terri Watkins, communications manager for the Oklahoma Medical Marijuana Authority. The state is still working on breaking down the sales tax revenue and 7 percent excise tax from medical marijuana by state and county, said tax commission spokesperson Paula Ross.

Wherever the additional sales tax revenue is coming from, it is giving West Siloam Springs a boost, according to Carr. Sales tax revenue is earmarked for budget items such as roads, water and sewer, and emergency medical services, she said.

"It's really helped a lot because we have had a rough year," she said. "Alcohol and marijuana sales have really helped our infrastructure."

The ReLeaf Center, which opened on March 1, 2019, was the first medical marijuana business in West Siloam Springs. The ReLeaf center sells marijuana flowers, vape products, edibles, drinks, topical and live plants. Since it opened, business traffic has been a roller coaster, according to owner Rizwan Ahmad.

"It goes up a little bit and then another competition opens up and then it goes down and then it kind of smooths out," he said.

Ahmad is also a resident of the town and said medical marijuana businesses are benefiting the community.

"It's been a big benefit to the town, revenue wise, and a big benefit to the patients who are really in need of some alternative to the opioids. ... The jury is not out, there are no studies done, but as far as people's opinion, far and large it does not have side effects, you cannot overdose on it," Ahmad said.

Hometown Stash, which opened on June 24, 2019, is West Siloam Springs' most recent marijuana business. Within a month the business outgrew its first location and moved to a second location, according to store manager Teresa Ward.

The business offers a selection of concentrates, edibles, pre-rolled joints, CBD gummies and tinctures, along with accessories such as bongs, she said.

"It has been surprisingly busy -- really, really busy," Ward said in August. "Within the first 30 days of being open, we knew we were going to outgrow the spot we were in and already started making plans to expand."

The business grew pretty steadily at first but has leveled off now that the customer base has been established, owner Jordan Morgan said earlier this month.

Because of supply and demand, marijuana prices are much lower in Oklahoma than Arkansas, so the business gets plenty of Arkansas customers, according to Ward. The Arkansas Department of Health website lists 32 dispensaries in the state, compared to Oklahoma's list of more than 2,200. Customers have come from as far away as the eastern side of Arkansas to shop at Hometown Stash, Morgan said.

Patients who have a medical marijuana card from another state can apply for a temporary card in Oklahoma, Watkins said.

Ahmad said he initially lost some customers when medical marijuana businesses opened in Northwest Arkansas, but the high prices in Arkansas are sending customers back to Oklahoma. Customers come from Missouri as well as Arkansas because Missouri currently allows patients to apply for medical marijuana cards but has yet to open any dispensaries, he said.

Even though he has seen ups and downs, Ahmad is not concerned about the future of the medical marijuana business.

"Oklahoma, they have it going on, they really do," Ahmad said. "Some people think there are too many dispensaries and it's flooded the market and blah, blah, blah. Well, you know what? If you are one of the last men standing, then obviously somebody (is going to profit) and that's what you've got to do."

There are laws against driving under the influence of marijuana in Oklahoma, and Barnett said that suspects who don't pass a field sobriety test are taken to the hospital for a blood test to see if they have any alcohol, marijuana or meth in their system.

Barnett said there is no local control over regulating or monitoring the medical marijuana businesses and all oversight of the businesses is done at the state level.

"Meth is the biggest public danger," he said.