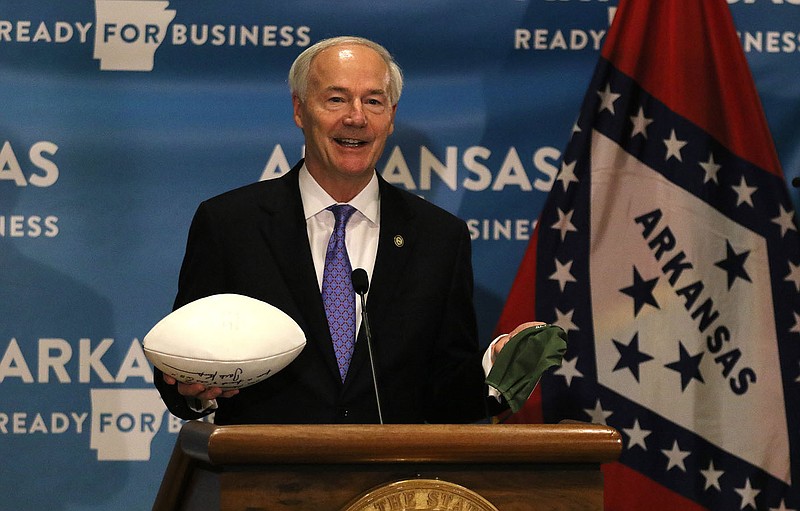 Thomas Methe/Arkansas Democrat-Gazette Gov. Asa Hutchinson holds up a football and a facemask during the daily covid-19 briefing on Wednesday, July 1, 2020, at the state Capitol in Little Rock. "If you want to see this (football) in the fall you have to be wearing of these right now (facemask)," the governor said masks need to be worn in order to curb the spread of covid-19 if there was a chance of football being played in the fall at any level.

Gov. Asa Hutchinson said during a news conference that contact sports, such as football, will not move forward to the next phase until covid-19 cases are down in Arkansas.

High school football teams resumed in-person workouts June 1 after a two-and-a-half month dead period, but in smaller groups and with no contact. Those workouts will not change for now.

"I'm anxious to play," Hutchinson said. "We'll continue to look at that. But because we have it [the state] on pause right now, until we have these cases down, then I don't expect the movement to take place before going to a Phase 3 or for opening up for those additional contact sports."

Arkansas is currently in Phase 2 of 3 for businesses with increased capacity, such as restaurants, gyms, barbershops and salons. But the state is in Phase 1 for community-based and school-sponsored team sports, which has allowed for schools to open and organized youth activities to take place. Hutchinson announced the state's sports Phase 1 on May 21.

At his daily news conference on the pandemic on Wednesday, Hutchinson held a white football in one hand and cloth mask in the other to emphasize the need to curb the virus's spread.

"There's a connection between the two," Hutchinson said. "We wear our masks, we reduce the cases, we reduce the growth, we stop the spread of the virus, and that puts us in a better position to have some type of team sports this fall."

Lance Taylor, the Arkansas Activities Association executive director, said he and his office have received several phone calls from coaches wanting to return to team practices, where they can run their offenses and defenses. Hutchinson's decision, Taylor said, did not come lightly.

"I think the student-athletes and coaches are ready to take the next step forward," Taylor said. "I don't want to talk for the governor or the Department of Health. The governor has an important job.

"He's not only worried about the safety of the kids, but for the safety of everyone in Arkansas. He wants the best situation for everyone."

"You always hope you can go to the next phase," Wood said. "But I respect where the governor is coming from. He's looking out for what's best for everyone in the state."

Wood said he relays the governor's and the state health department's message daily to his players.

"We want our kids to use proper social distancing," Wood said. "To stay 6 feet apart. But if they're not 6 feet apart, to get your mask on.

"We tell them that it's all about the fall. Everything we do can help us with playing this fall."

In July, football teams across the state are typically participating in 7-on-7 passing tournaments and team camps to prepare for the season. The AAA's first day of fall practice is scheduled for Aug. 3.

Wood said the Wildcats will keep preparing as if the season will start the week of Aug. 24-29, which is the first of 11 regular-season weeks for football teams in the state. Teams are allowed to play 10 games in a regular season.

"I think we're on target to start the season," Wood said. "In an ideal situation, you wish you could move to playing 7-on-7 and have players do contact drills.

"We hope to get to that next phase. But we'll continue to lift weights, run and have our students acclimate to the heat."

Vilonia Coach Todd Langrell questions whether the season will begin as scheduled because of possibly not having a July with the accustomed contact for football teams.

"I don't see how it can start on time," Langrell said. "I can't see where if you have no contact, no equipment, no face shields and then they go, 'OK, you're free to go.'

"We want to play. For our seniors, we want them to play a full season."

Taylor said the AAA has had discussions regarding fall sports and whether they'll be played as scheduled in August. He remains hopeful fall sports -- including football, volleyball, golf, tennis and cross country -- will start on time.

"We look at the numbers," Taylor said. "We've had over 20,000 cases. We have over 3 million people in Arkansas. Percentage-wise -- and I don't want to downplay it because I know there's been a lot of deaths -- but we're doing well compared to a lot of other states."

Current health department guidelines, in conjunction with the AAA, state coaches must wear a mask at all times, and that players wear a face covering when not actively working out. Also, proper social distancing of at least 6 feet is suggested, and players and coaches receive daily digital thermometer checks to participate in the workouts.

Cleaning supplies -- such as hand sanitizers, spray bottles and towels -- are also in use by schools on and off the field, including in the weight room.

"I can promise you, we do the right things," Langrell said. "We go 6 feet apart, 12 feet apart. We're as neat as you can be. We stress it so much. But sometimes, if you have four kids get into the same vehicle after practice, then that defeats the purpose."

The latest news of Arkansans being infected by the virus has stuck with Langrell.

"We're all up in the air on this," Langrell said. "It's scary how the cases multiply so quickly. You could have one kid have it, then have others come in contact with him.

"We want to be as safe as possible for everybody."

-- An Arkansas Democrat-Gazette article from July 2 contributed to this report.