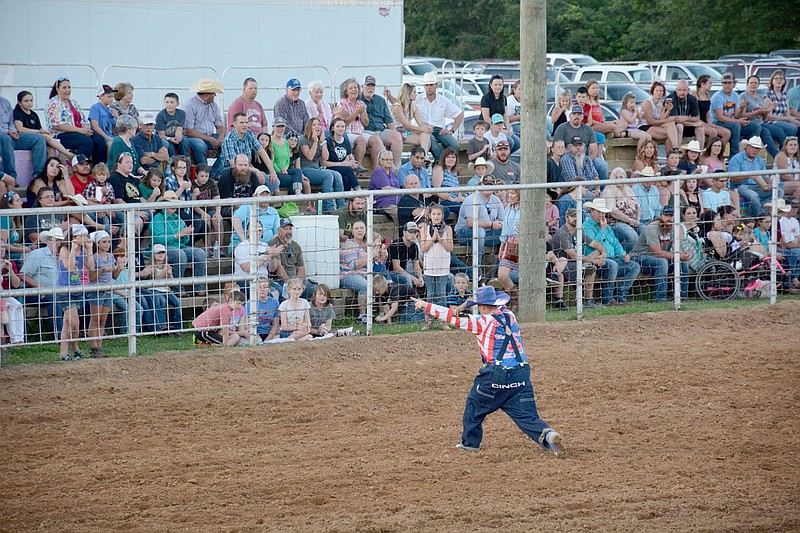 Michael Smith knows exactly where he got his rodeo nickname "Goobie."

It was 2010, before he began his current gig as a rodeo clown, and he was still riding bulls and bucking horses at rodeos all over. But he always had a light, humorous side about him.

"This whole goofiness, acting up and making people laugh, as far as I know I've always enjoyed doing that," he said.

"Someone said, 'You're such a goober,' and (Hampton) said, 'No he's a Goobie,'" Smith said. "Ever since then everybody's called me Goobie -- even my kids."

Goobie, who was raised in Springdale and now lives in Siloam Springs, will be performing this Thursday, Friday and Saturday at the 62nd annual Siloam Springs Rodeo.

"It works," said Smith, who is a teacher and assistant football coach in the Siloam Springs School District. "Usually clowns have nicknames. Goobie's always stuck in the rodeo world. I was called that before I became a clown."

Like many areas of life, the rodeo world has been affected by the covid-19 pandemic and Smith's role as a rodeo clown is no different.

The Siloam Springs Rodeo will be the fifth he's worked this season, joining rodeos in Moline, Kan.; Erie, Kan.; Cullman, Ala., and Lawrenceburg, Tenn.

Because of the pandemic, he's missed around 27 rodeos. He said he works anywhere from 70 to 90 rodeos in a year.

There's a definite financial hit, but he said the biggest void is the emotional aspect of not getting to see people he works with in different states.

"You have relationships with people all across the country," Smith said. "So far I've missed out in seeing people that I've built relationships with in Michigan, Wyoming, Tennessee, Alabama, all the places I travel to. It'll be two years before I get to see them again. That's probably the biggest impact it's made. There's one thing about rodeo that people don't understand. It's a competition, but rodeo is a big family. It really is. There's a huge love and socialization and camaraderie there."

"This time of year is what's called Cowboy Christmas," he said. "The Siloam Rodeo is usually kind of the beginning point of Cowboy Christmas, which is the end of June through the beginning of July, it's the Fourth of July run. Some of these cowboys and cowgirls will hit literally 40 to 50 rodeos in a four-week time period. It's the most significant time of any one season because it's when the most money can be earned. A lot of these individuals are struggling, and I guess the biggest impact is going to be on the year-end result."

Because of all that, Smith is looking for this week's rodeo to be a big event for the region.

"I'm looking forward to a packed house every night," Smith said. "I think our communities around Northwest Arkansas are looking for something to do. Being that this is an activity that's outdoors I know that's going to help. I know the contestant list is going to be a very large contestant list. We're going to have a lot of former world champions. I can tell you that without looking. With Springdale canceling, a lot of individuals they only get to make one or two rodeos as a fan. ... Siloam's a great rodeo. For an amateur rodeo, it's one of the best in the country."

And Smith's job will be to help entertain the fans.

"You have to get the crowd into the event and make them feel like they are a part of what's happening, which is a great thing," Smith said. "Our cowboys and contestants feed off the energy and excitement the crowd provides. Part of my job is to provide that without overdoing it. Sometimes if you ask too much out of somebody you get burned out pretty easy. Throughout the duration of a two-hour event you've got to know when to do it, but at the same time the job's very serious. I'm there to entertain fans, but I'm also there for cowboy protection and make sure the cowboys are safe and everyone gets home to their families."

Smith added it will be a little bit different this year with the pandemic.

"Usually I'll get into the stands and interact and have a lot of fun with individuals," Smith said. "It makes my job more difficult because I can't have that close interaction I do with fans on a normal basis. I'll probably stay inside the arena more, which that's part of my job anyway to make sure the surrounding area is safe. The interaction's not going to quite be there." 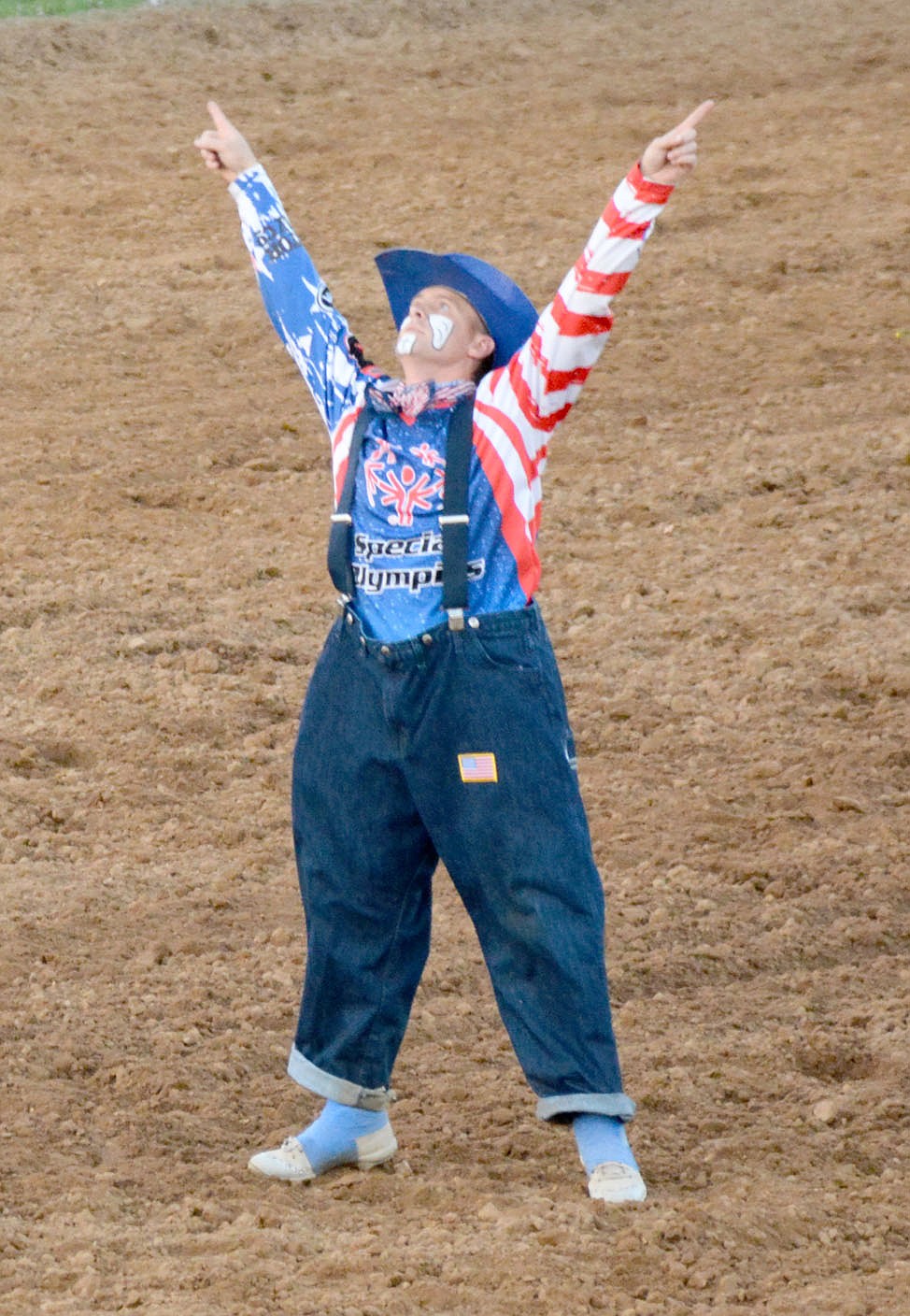 Graham Thomas/Herald-Leader Rodeo clown and Siloam Springs resident Michael "Goobie" Smith points to the sky during the 2019 Siloam Springs Rodeo. Smith will be back this week as the rodeo returns Thursday, Friday and Saturday. 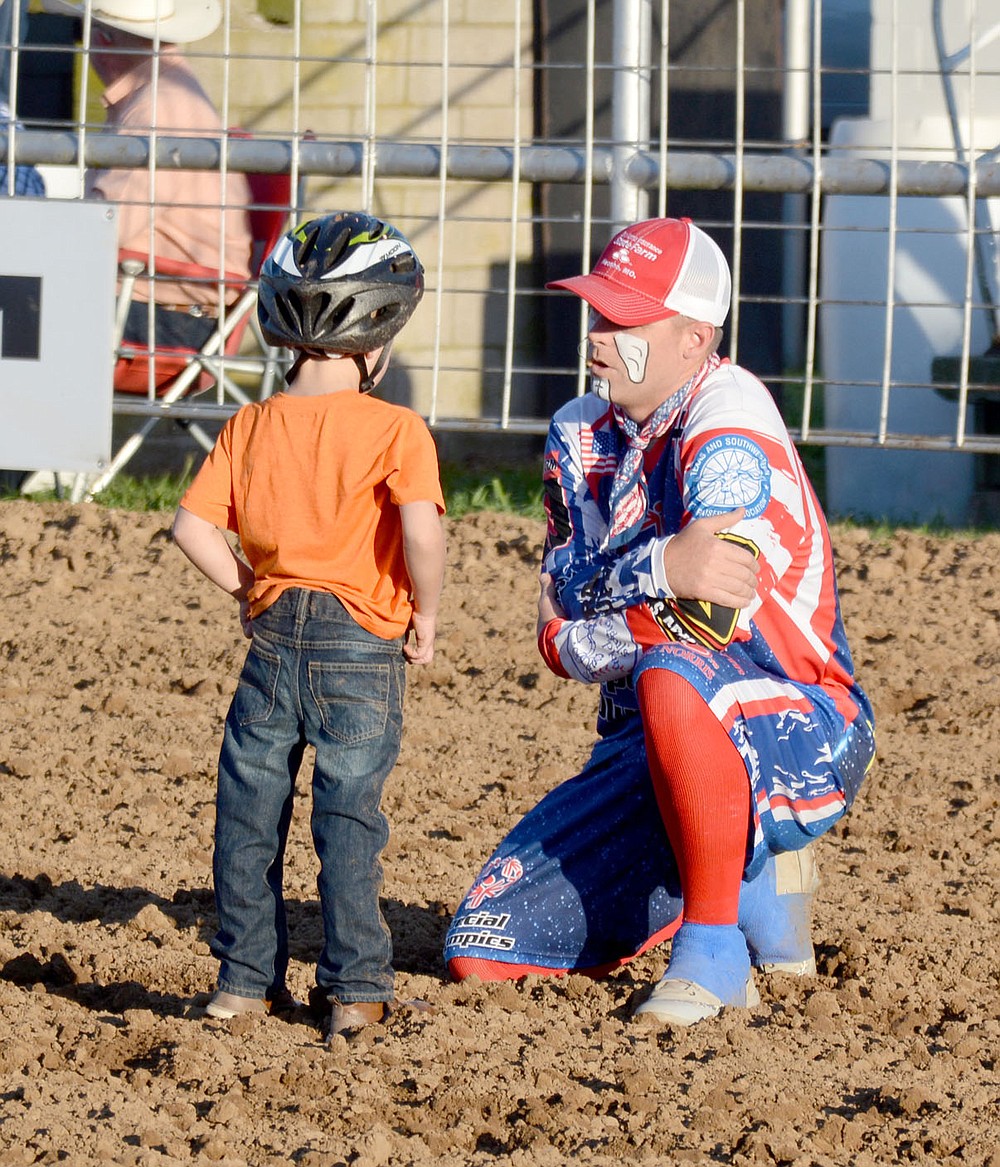