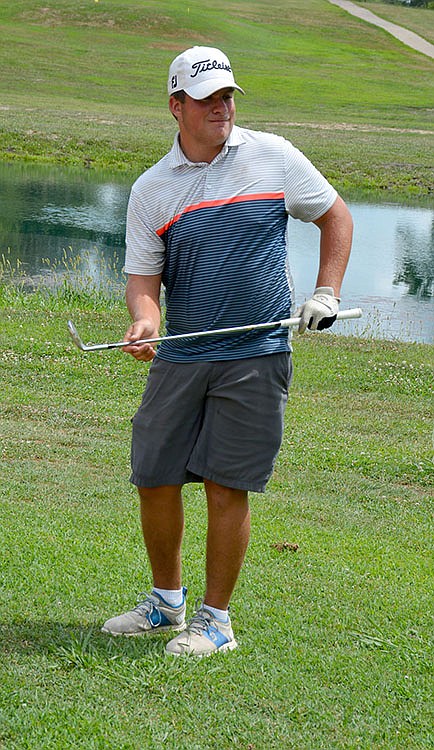 Graham Thomas/Herald-Leader Siloam Springs senior Chris Svebek watches his chip shot during golf practice on Monday at The Course at Sager’s Crossing. Svebek is one of six seniors for the Panthers, who open their season on Aug. 3 at Big Creek Golf & Country Club in Mountain Home.

In what has been a challenging spring and summer for nearly everything because of the covid-19 pandemic, there have been some bright spots for the Siloam Springs golf team.

The Panthers and Lady Panthers have had their best attendance for summer practice, according to Siloam Springs golf coach Michael Robertson.

“We’ve had our team here every day, which is fun to see,” Robertson said. “Kids are here every day working hard under some tough conditions. They’re excited to be here. Our kids want to be a part of something. We’ve had teammates that hadn’t seen each other or been outside of the home much. Normalcy (of practice) has been good for the kids.”

Robertson said the Panthers and Lady Panthers have done a good job of adhering to health guidelines, including wearing masks and social distancing.

“They’ve done everything we’ve asked them to do to give our team the best chance of competing,” he said.

The 2020 golf season is scheduled to begin on Monday when both teams participate in Day 1 of the Ultimate Auto Group High School Invitational at Big Creek Golf & Country Club in Mountain Home.

Because of travel regulations, the team will not be able to stay overnight and participate on Day 2, which is one of several changes for this golf season, Robertson said.

The golfers won’t be participating in the annual Arkansas Children’s Hospital Fundraiser that’s typically held in Bella Vista. Team get-togethers after golf matches have been cut out of this year’s schedule along with their preseason team bonding trip.

“They understand it’s giving them the best shot to go play,” Robertson said. “I’m excited we’re going to get that chance.”

For the first time since 2010, the Siloam Springs boys did not qualify for the state tournament last season. Only returning senior Ethan Owens qualified as an individual.

“We had some guys that were definitely disappointed that we didn’t perform,” Robertson said.

With 16 players on the roster, and around 10 competing for varsity playing time, there will be plenty of competition to get back to the state tournament in 2020.

Owens is one of six seniors, many of whom have varsity experience.

“Ethan Owens comes back from being only guy in the state tournament last year,” Robertson said. “He’s played at a level higher than anybody. That was a new experience for us not having a boys team in state tournament, but we’re glad he got to go.”

Senior Chris Svebek has had a strong summer, his coach said.

“Chris Svebek has been one of our most consistent guys,” Robertson said. “He’s played in several events. Chris has showed the ability to perform really well. Last year was his first year to compete at the varsity level, and there’s definitely a learning curve as far as the mental side of the game.”

Brothers Max and Miles Perkins have each had good stretches over the summer. Max Perkins is a senior, while Miles is a junior.

“We’d love to get them playing consistently together,” Robertson said. “They’ve grown a lot physically.”

“He’s another guy that had a lot of varsity experience and who is capable of playing really well,” Robertson said. “When he’s playing his absolute best, he’s as good as anybody.”

Nick Gray and Owen Thomas round out the senior class who are fighting for playing time.

“They all have parts of their game that are really good,” Robertson said. “Those are all guys that have the physical tools. Every one of them can go out and hit really quality golf shots. The key is can we put it all together for 18 holes?”

Sophomores Camden Blackfox, Jackson Doornbos, Reece Pinkerton and Will Van Asche and juniors Patrick Church and Preston Moody round out the 16-man roster.

“I think competition is going to be really high on the boys side,” Robertson said. “We may be limited on the road on how many we can play because of covid guidelines. There’s a lot of elements to that.

“I would say those are all guys coming back with varsity experience from last year or have some shown flashes this summer. I think across the board our ability to play quality golf is there. The key for us is just going to be consistency. We’re looking for guys to show consistency so we can lock in a group and progress throughout the season.”

The Lady Panthers also missed the postseason for the first time since 2010, however two returning players did play in the state tournament in Emily Self and Baylee Morris.

Both Self and Morris return to a group of seven girls on this year’s roster.

Self, a junior, is setting the tone for the Lady Panthers, her coach said.

Self has played in a lot of men’s and women’s events at The Course at Sager’s Crossing, where her dad Jonathan Self, is the local golf pro.

“She has gained a lot of experience by playing in men’s and women’s adult events here at the course,” Robertson said. “She had moments last season where she played really well. She’s playing a lot more consistently. I think she really enjoys playing golf and that’s fun to see.”

Morris, a sophomore, has shown a lot of commitment to the game and has gotten a lot better in the offseason, he said.

“Baylee Morris is another I’m expecting big things out of,” Robertson said. “She’s a determined young lady. She’s driven. If we’re going to have the kind of season that we want and we expect, Baylee’s going to have to take another step forward. I think she’s ready for that challenge.”

Sophomore Brooke Smith has had a good offseason after playing a lot as a freshman.

“Brooke Smith is one of the more gifted athletes in the high school on the ladies side,” Robertson said. “She’s just a really good athlete, great kid. She’s a thinker, likes to think through things. She wants to be really good at everything. Brooke is going to play really consistently and has the capability to be a 1-2-3 on any given day. If she plays like she’s capable we have a chance to play some really good scores.”

“She’s worked herself into a spot where we’re excited about her taking another step forward and being a solid varsity player.”

Senior Kate Gryder has joined the team and will battle for playing time along with sophomore newcomers Trang Phan and Alyson McWilliams.