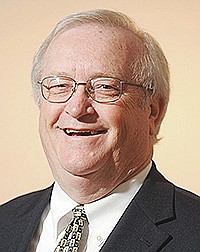 It is hard admitting that there is something wrong with our country.

It is extremely disheartening to feel that even here in Northwest Arkansas where mostly peaceful demonstrations have been staged, that not everyone wants to abide by the laws of property and decency towards others.

In some instances, rocks, water bottles and fireworks have been thrown at police.

Also in one instance, the police deployed tear gas on the crowd. Men and women of law enforcement also donned military-style tactical gear against those protesting peacefully.

And yes, as the headline says, yet another relatively unknown citizen's name has been added to our country's tragic racial and police enforcement history.

Not only is it time for us all to once again examine ourselves, our beliefs and our biases towards others – be it race, economic status, culture, language or social standings; we each need to revisit our personal history of such.

That may be the only true way to bring about change – one person at a time.

For example: How many of us have conversations with others (especially prior to the covid-19 lock-down) where a store owner, sales clerk or some other person referred out loud to someone of obvious non-white, Hispanic person struggling with a purchase or direction as "Mexican," or something of a worse slur on their immigration status – and we said nothing.

Nothing! Not even a peep about the obvious slur.

We had the chance to engage that person we know in a short lesson in what is proper and what isn't proper to say to others who don't look like us. But we did nothing.

And this list can go on and on and on.

Perhaps it is not a race thing, but just a decency issue.

How many people daily do you hear swear or curse in public? Often utter vile, loud phrases that should shock our moral consciousness. We hear grown men and women and certainly the young people continually take the name of our Savior in blasphemous context after blasphemous context.

The four-letter curse words fly off their tongue faster than the proper verb tense in a conversation.

And we do or say nothing.

I'll admit, at first, I was a little surprised that Gov. Asa Hutchinson this week, evoked the powerful proclamation to declare a state of emergency, wrongly, I first guessed to placate the sitting President of the United States.

Only after I saw photo after photo from the vandalism at the Arkansas State Capitol where vulgar graffiti was spray painted and windows were broken, did the bile rise in my throat. Asa has worked too hard (along with others) to be in a position of responsibility not to evoke every safeguard he has to thwart such lawlessness in our state.

One of the most thoughtful African-American soldiers of the old days of the 1960s when lunch counters were off limits, when voting rights were shamefully denied in Arkansas to both black and poor people, told me once, he "...was praying for the day when his people would stride up those capitol steps with new and elected power to enact change for people of color and those poor and downtrodden."

His blood would turn cold to think someone of his race or any race would run up those marble steps to spray paint vulgarity on those stones of a building where the laws made therein to help ALL people in equal fairness.

Little Rock's turmoil has calmed at this writing, a fortnight after the death of George Floyd in faraway Minneapolis. The anger and the frustration are still there in our nation. It will still be there even with city, county and state officials at every hamlet in our state trying to bring people together for change.

It has not been an easy meeting to have on a topic that many want to simply dismiss as being a problem somewhere else.

But that problem is right here and could explode today or tonight if another senseless, violent act occurs against another unarmed citizen.

All lives really do matter.

--MAYLON RICE IS A FORMER JOURNALIST WHO WORKED FOR SEVERAL NORTHWEST ARKANSAS PUBLICATIONS. HE CAN BE REACHED VIA EMAIL AT [email protected] THE OPINIONS EXPRESSED ARE THOSE OF THE AUTHOR.