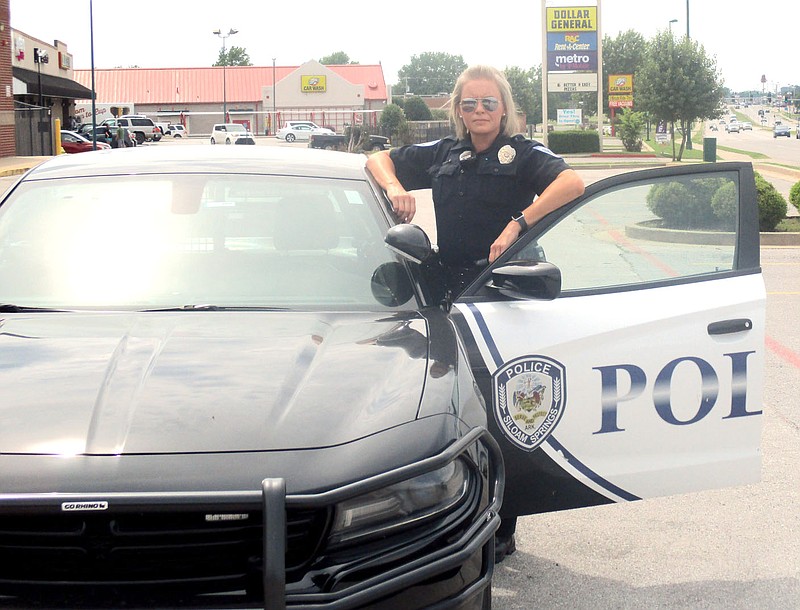 Marc Hayot/Herald Leader Officer DeAndra Strickland poses with her police cruiser. Since the schools shut down because of the coronavirus pandemic she has been working patrol.

DeAndra Strickland didn't see herself becoming a police officer when she started as a dispatcher for the Siloam Springs Police Department, but signing up led Strickland to discover her passion for caring for kids as a school resource officer.

Strickland has been an officer with the SSPD for 13 years. Since graduating from the police academy in 2007, Strickland has held a variety of positions within the SSPD. She has been a patrol officer; a detective with the criminal investigation division; a school resource officer (SRO); and a community relations officer.

"When he left we had a spot to fill and we didn't have anybody at the time who could meet all of the qualifications," Strickland said. "You have to have a certain amount of qualifications ... before you can be in this position."

Strickland's superiors came to her and asked her if she could take over at the elementary schools as an SRO and still maintain her job as a community relations officer. She said yes and returned to the school system.

Within a few weeks, she went back to her captain and said she would like to be in charge of the SRO program at the school level when the current head of the program retires. Strickland's captain and the chief discussed it and agreed, she said.

Strickland's family moved around a little bit when she was younger, she said. Strickland lived in Garden City, Kan., New Jersey and Paragould, where she graduated from high school.

"There are actually two teachers that teach (at Southside Elementary School) that were in the same grade that I was," Strickland said. "There's another one at Northside who was in my class."

Never thought about being a cop

Strickland started her career as a dispatcher in 2005, she said. She worked in that field for two years before attending the police academy.

"I was a dispatcher and at that time we were in the old building and we still had our jail that was fully functional and we had jailers that worked back there full-time," Strickland said. "We only had male jailers, so when they would bring in a female inmate, then our female dispatchers would go back and help them, getting them dressed out and conduct the searches and that was one of the things that I would have to do."

When some of the officers saw her interact with the female prisoners they asked her if she ever thought about being an officer. She dismissed them at first, but eventually she decided to take the leap.

"I've never thought about being a cop," Strickland said.

Growing up, Strickland wanted to be either a teacher or a lawyer. Becoming a police officer enabled her to have the best of both worlds she said.

Strickland has teaching moments where she gets to be in a classroom with the kids, she said. She also gets to read books to students and speak at school assemblies. The lawyer aspect comes from enforcing the law, she said.

"I feel like I got the best of both worlds but by accident," Strickland said.

Strickland's superiors think highly of her.

Spicer said Strickland is such a successful officer that she also serves as a field training officer and teaches at both the SSPD and the Arkansas Law Enforcement Training Academy.

"Anytime DeAndra has been needed, she has always answered the call and served in whatever way she is needed." Spicer said.

Since the coronavirus outbreak and the shutting down of public schools, Strickland and the other SROs have been reassigned to the patrol division until schools open back up. Strickland misses the kids and does look forward to being back in the schools, she said.

For Strickland, being an SRO is all about connecting with the kids.

"They do knuckles and high fives," she said.

Strickland splits her time between the two schools, depending on where the greater need is, she said. Having cameras to monitor both campuses in her offices helps her keep track of what's going on. The principals of both schools, plus the office staff, have her phone number in case something arises, she said.

As an SRO, Strickland is responsible for the safety of staff and students. She wants people to know she is there on the campuses, Strickland said. At an elementary school level there's more interacting with kids and talking to them, she said.

"Yesterday (in early March), I went into a Pre-K class and they had two classes in there and they started their community helper week yesterday so the teacher asked me to come in and talk about what it is to be a police officer," Strickland said.

She read a bood to the students and told them stories of what SROs do in schools, as well as explaining all of the equipment she has to work with. When she is not connecting with kids or speaking to classes, Strickland does her community relations work. She keeps the police department's Facebook page pulled up on the computer so she can make updates as needed.

"She is very genuine," said Michelle Paden, principal at Northside Elementary School. "She makes connections and shows the kids that the role of law enforcement is a helper."

Paden shared a story about an incident where Strickland had to arrest the parent of one of the students. Strickland had the child brought inside so they did not have to see their parent being arrested.

"She is able to fulfill that role as a police officer but she doesn't forget that she is dealing with small and vulnerable children and puts their needs first," Paden said.

Strickland also decorates her door in order to be involved with the kids. In February, Strickland cut out some paper hearts and took them to third grade and fourth grade classes and had the kids write who they love and why. When the hearts were returned to Strickland, she hung them on her door.

Strickland did not have the chance to decorate her door for March because schools closed in mid-March due to the coronavirus pandemic.

"So it's all about that interaction and being around them at this age to really start to set that tone and building those relationships," Strickland said. "When they get older and they have those issues and problems they'll feel more comfortable coming to us and talking to us."

Strickland also participates in programs with the kids. When she was an SRO at the middle school, she was part of Girls on the Run, where she and the girls would run together.

"Basically it's a mentorship program for these young girls and these adult women and men can get involved with it and volunteer their time," Strickland said.

"Basically, it's a group that comes together to help spread the message of being drug and alcohol and tobacco free," Strickland said.

The coalition does a kick-off in middle schools across the county, usually in October, Strickland said. One year, the organization had Peyton Hillis come and talk about making good choices; another year a skydiver dropped in at the football field at the middle school and delivered a drug free proclamation, she said.

In the five years Strickland has been a member of the organization, she has helped Drug Free Benton County organize events at different middle schools instead of just having one event in Bentonville.

"So I opened my big mouth at a meeting and said 'Why aren't we doing these events at other schools? Why are we only getting these kids at Bentonville Old High Middle School? Why aren't we doing these all over the county?' So they said 'Oh, you want to do one at Siloam?' I was like 'Uh, okay, let me talk to my boss, but yeah sure.' So it's just grown from there."

Presently the cities of Gravette, Pea Ridge, Rogers and Siloam Springs hold events and Drug Free Benton County is working on getting a program in Gentry, she said.

Along with the kick-off event, SROs go into the classrooms and present information to the kids about the dangers of drugs and alcohol abuse, Strickland said.

"I don't think you can find a more community-minded law enforcement officer in Benton County," said program director Rick McLeod. "If she knows of a need, she will work diligently to solve the problem."

Strickland would have participated in the Arkansas Special Olympics Torch Run in May. The event was canceled due to the coronavirus pandemic, she said.

Strickland and other SSPD officers would have run the Olympic torch from the tourist information center near the Arkansas/Oklahoma border all the way to Gum Springs Road at the east end of town. A representative from the Benton County Sheriff's Department then would have taken the torch and run it to the Washington County Line, Strickland said.

Strickland is also a member of SALT (Seniors and Law Enforcement Together), where she and members of the senior population discuss issues affecting seniors, such as being taken advantage of by caregivers, family members and other people.

Strickland's favorite event is the annual Cops and Kids program sponsored by the Siloam Springs Fraternal Order of Police (FOP), where SSPD officers take children and their parents to shop for Christmas gifts. As president of the FOP, Strickland has organized the program for the last 11 years and enjoys showing a different side of police officers.

"I love being there with those kids and their parents, being able to give back," Strickland said.

Another aspect of Strickland is her love for God and family. Strickland regularly attends church on Sundays at Life Church in Rogers and enjoys spending time with her three sons, ages 25, 20 and 15.

"Family is a huge deal for me," Strickland said. "I have a big family so we typically get together every so often, birthday parties, and family events and stuff like that."

If one were to ask Strickland if she is a role model, she would answer no.

"I'm sure that some people will probably say that," Strickland said. "I don't like saying that about myself. I don't really like the spotlight being on me. I am probably one of my own worst critics."

Anjila Castanada, who has known Strickland for around six years, said Strickland served as the SRO when her daughter was in seventh and eighth grade. Strickland has influenced her daughter Alexis in the best way and was someone Alexis could look up to and trust for great advice, she said.

"Even when she had left the school that Officer Strickland was working at, she knew that if she needed her for anything, she was a call away," Castanada said.

Castenada's daughter is now a senior in high school and she and Strickland still have a close bond.

"With everything going on in this country at the moment, I do want to say thank you to Officer Strickland for loving us and our community," Castanada said.

For Strickland, it is all part of helping bridge the gap between the community and law enforcement.

"We want the kids to run to us for help and not away from us because they think they will be in trouble," Strickland said. 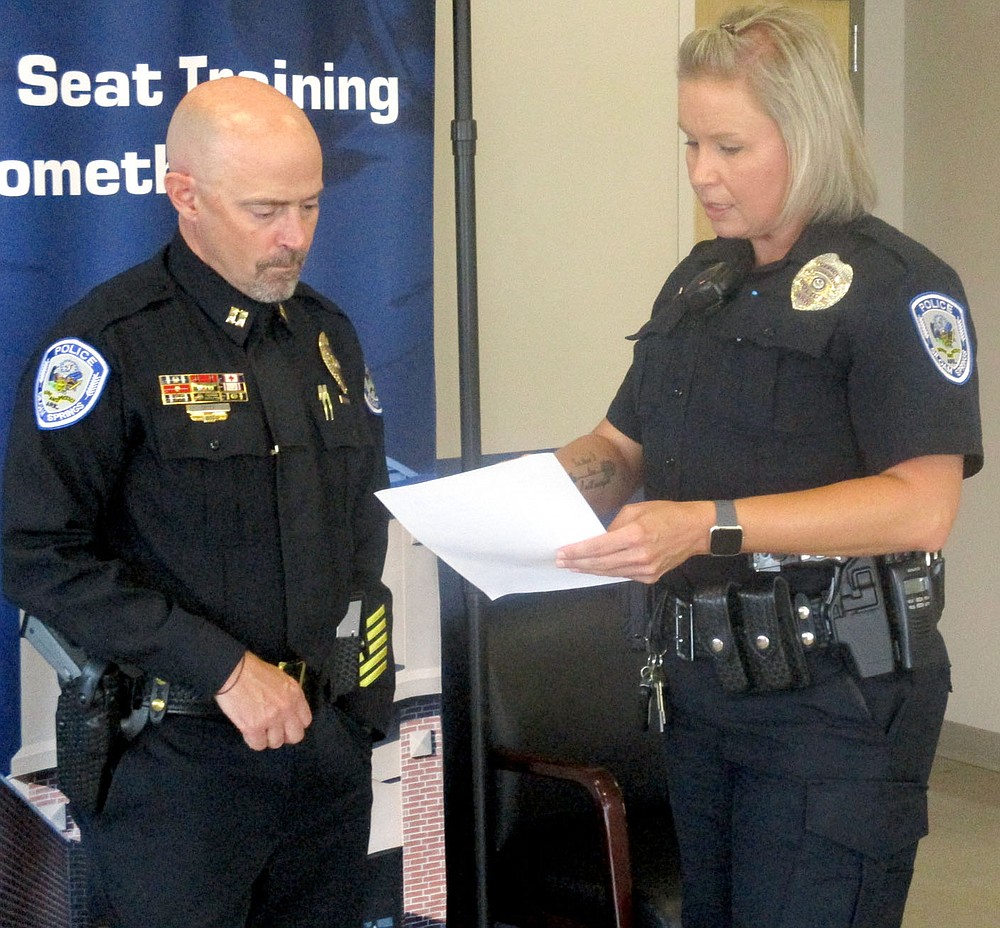 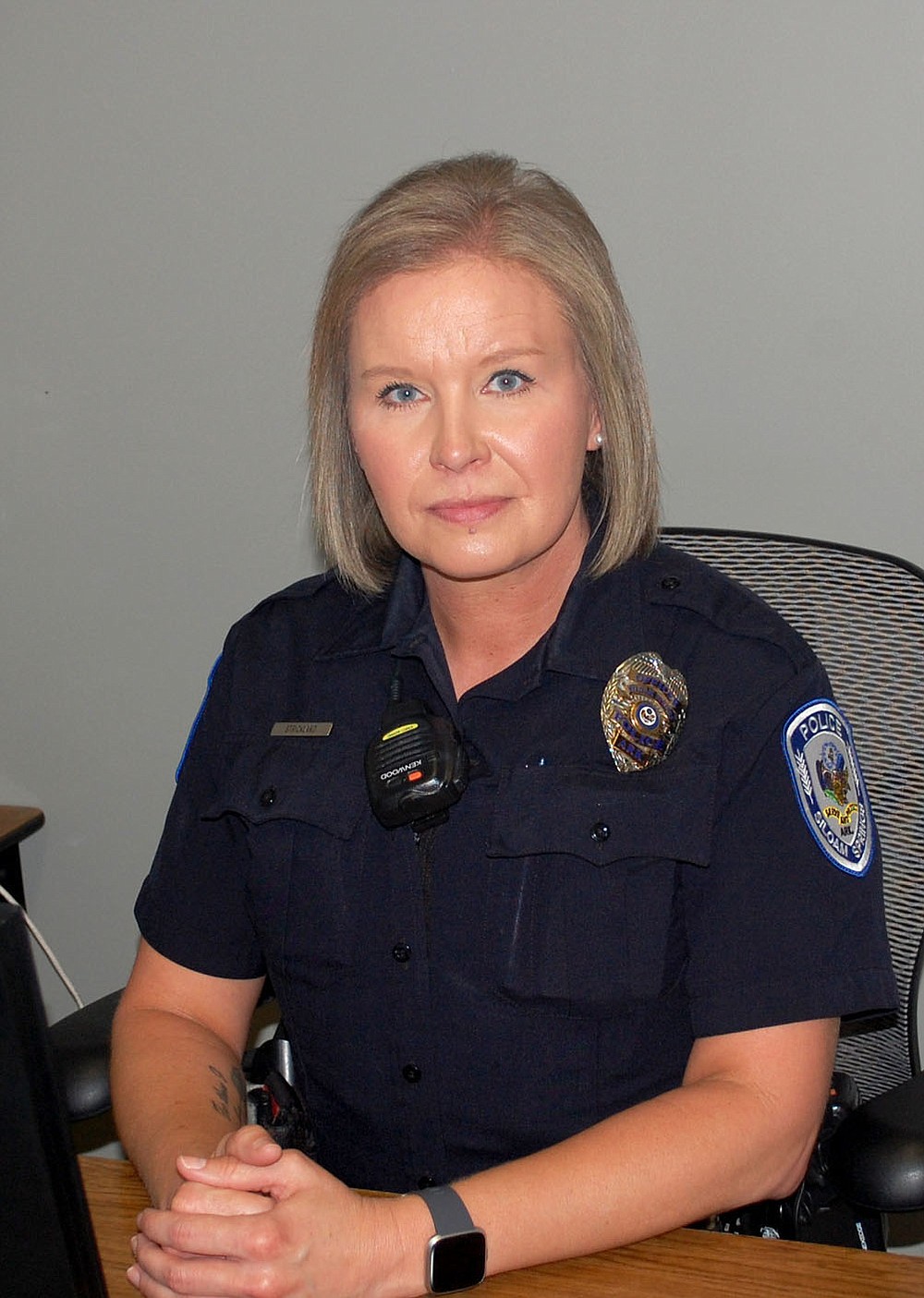 Marc Hayot/Herald Leader Officer DeAndra Strickland at her desk at Southside Elementary School. Strickland enjoys getting to connect with kids and making an impact on their lives.