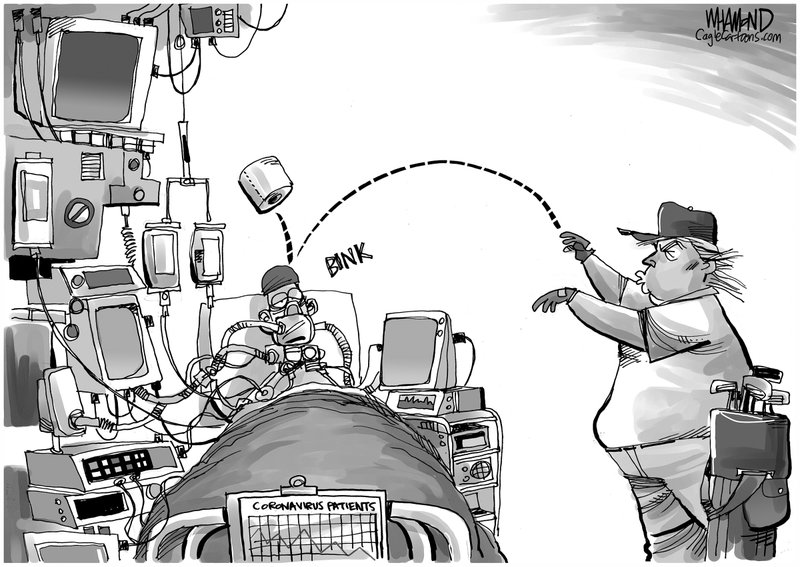 "And scattered about it, some in their overturned war-machines, some in the now rigid handling-machines, and a dozen of them stark and silent and laid in a row, were the Martians -- dead! -- slain by the putrefactive and disease bacteria against which their systems were unprepared; slain as the red weed was being slain; slain, after all man's devices had failed, by the humblest things that God, in his wisdom, has put upon this earth."

The affairs didn't fell him, nor did his locker-room talk of grabbing women. Investigations of foreign influence in elections, using the presidency to enrich himself, millions of taxpayer dollars spent on golf trips, withholding military funds to a Unites States ally to coerce investigations into potential political opponents, along with thousands of lies; all failed to stop Donald Trump from doing what he wanted as president. Ironically, it may be that the smallest of organisms found on Earth, a virus, dooms his re-election chances.

This administration has failed miserably in handling the coronavirus outbreak. Trump's administration had already dismantled the plans of the Department of Homeland Security and National Security Council that specifically addressed viral outbreaks. A global health team headed up by Rear Admiral Timothy Ziemer was dismissed by John Bolton in 2018. Trump has removed qualified civil servants and replaced them with loyalist hacks. Two-thirds of the top jobs at Homeland Security have yet to be filled.

Trump's plan for protecting this country from COVID-19, the virus first found in China in December 2019, was simply one of containment and ... nothing else. Containment only works in buying time to put in place more stringent remedies. Trump thought of the virus in the same way he thinks of illegal immigration: just stop it at the border. Build a wall, so to speak.

But Trump did nothing else. Instead of getting ahead of the issue early on by ramping up production of testing kits, masks, and those supplies now becoming scarce, he simply stated that there was nothing to worry about and continued his golf outings. He asked one doctor if the flu vaccine could be used against COVID-19, then stupidly stated that a vaccine would be ready in several months, revealing his ignorance of the science. This is not a partisan issue. Senator John Kennedy, a Republican senator from Louisiana, became incensed at Acting Homeland Security Director Chad Wolf for being unable to answer basic questions about the potential for an outbreak to occur in the U.S.

Trump was unwilling to take stronger measures against the outbreak because of his concerns that it would negatively affect the economy. He made a point of saying how great the stock market was doing. The next day, the market began a week-long dive of historic proportions, interrupted only by a rise when Biden won the Super Tuesday primaries.

Now the U.S. has experienced deaths due to COVID-19. Infections are showing up in more states. The Trump administration is toying with the idea of banning all cruises. Conferences, conventions, sporting events, and any organized meeting involving large groups of people are being canceled. Airlines are cancelling flights. Travel has been curtailed. Gas and oil prices are dropping, and lest you think that a good thing, U.S. oil companies have already started laying off employees and capping wells. The tourism industry, and most all service-oriented companies, are experiencing record losses. Who wants to go to a gym, restaurant, or make an optional visit to the dentist or health clinic, if the fear of viral infection is suspected? The service industries are a large and vital part of American markets. A dip in demand for those services starts a domino effect on all aspects of the economy.

The state of the U.S. economy plays a huge role in presidential elections, for reference, see "It's The Economy, Stupid." Trump has enjoyed good approval numbers primarily based on how well Americans feel about their financial status. If COVID-19 continues to be a threat, and "Trump fatigue" continues to grow, we may actually have a close presidential contest this November. How ironic that after all the Democrats' devices failed, Trump may be bested by one of the humblest things that God, in his wisdom, has put upon this earth.