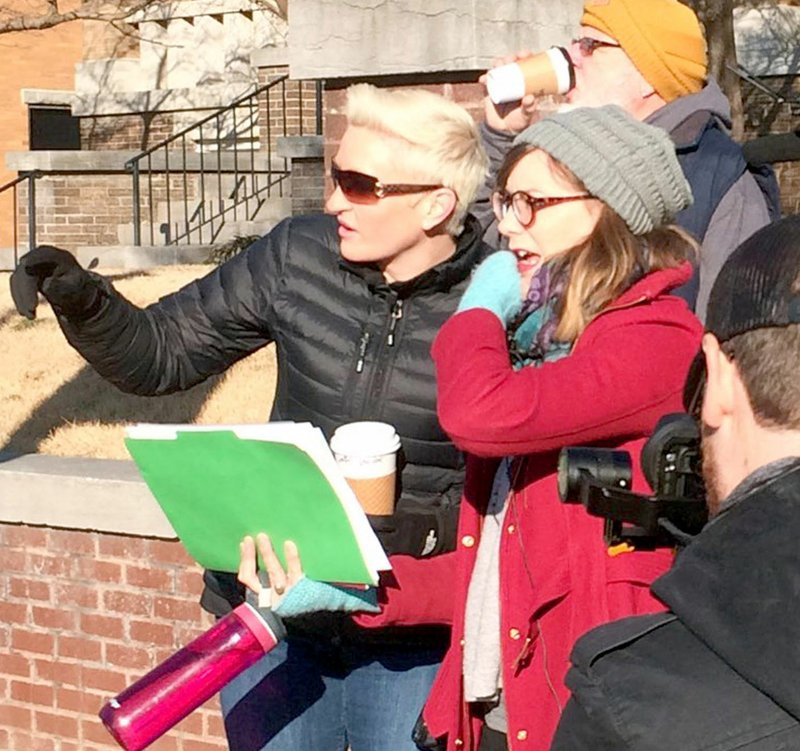 Janelle Jessen/File photo Kelsey Howard (left), executive director of Main Street Siloam Springs, leads Amanda Brinkman, host of Small Business Revolution: Main Street, and her film crew on a tour of downtown Siloam Springs in January 2018. Siloam Springs was one of the top five contenders to be featured on the show. Howard announced Friday that she plans to accept a position as director of operations for the Regional Arts Service Organization.

Kelsey Howard, executive director of Main Street Siloam Springs, announced Friday that she plans to accept a position as director of operations for the Regional Arts Service Organization, a new nonprofit under the umbrella of the Northwest Arkansas Council.

Howard, who has served as executive director for the nonprofit since 2016, called her departure "bittersweet." Her last official day with Main Street will be on April 3, the date of the Main Event, she said.

"I believe this is a natural next step for me to continue advocating for the town I love at a very significant point in the region's growth," she wrote in an email to Main Street members announcing her departure.

Serving as executive director of Main Street Siloam Springs has been more than a job, allowing Howard to work towards something she believes in, she said Monday. The nonprofit clearly makes an impact by leading a community effort to empower people to work alongside each other to revitalize downtown Siloam Springs, she said.

Through her work at Main Street, Howard said she discovered that she really cares about arts and cultural development. When she found out about the Regional Arts Service Organization, Howard was initially interested from the perspective of Main Street. The transition happened organically and Howard is excited to be part of a regional effort to promote the arts, she said.

While its sad to see Howard go, Main Street board member Heather Lanker said she is happy Howard is leaving on a high note. In February, Main Street Arkansas named Howard Outstanding Executive Director during the 2020 Excellence in Downtown Revitalization Awards ceremony hosted by the Arkansas Historic Preservation Program at the Statehouse Convention Center in Little Rock.

Lanker said she has never seen anyone who can empower people, including volunteers and board members, like Howard.

"She gives you the space to run with things and ownership of what needs to be done," Lanker said.

During her time as executive director, Howard has established a strong board of directors and encouraged the directors to take charge of committees and get involved beyond the board room, Lanker said.

Former board member Shirley Dilbeck said Howard was a great advocate for not only Main Street but the entire community.

"She has been such an asset to Main Street along with making a name for herself as she has lead the charge in our state to put our name on the map. ... Both she and her expertise will be missed but (I am) so proud of her and the work she has enabled for Main Street Siloam Springs," Dilbeck said.

Howard said expanding partnerships throughout the community was one of her favorite parts of her work at Main Street. Other highlights have been serving on the committee for Memorial Park, the installation of the Arts Feed mural featuring the work of kindergartners from Northside Elementary School installed on Arvest Bank, and the installation of the sculptures on the bump-outs on Broadway Street, she said.

"You all are the heartbeat of downtown Siloam, and I'll do everything in my power to ensure a smooth transition," Howard wrote in her email. "MSSS is healthy, strong, and poised to move forward efficiently and confidently; our board and committees have never been stronger and more engaged to execute projects and long-term goals outlined in our 5-year strategic plan (2020-2024).

"It's been an absolute honor working alongside all of you. I will continue to live near downtown and can't wait to see the ways you all continue to flourish and set the bar high for downtowns around the country."

The local Main Street board is working with Main Street Arkansas to develop a job description and will soon begin the search for the nonprofit's next director, Lanker said.