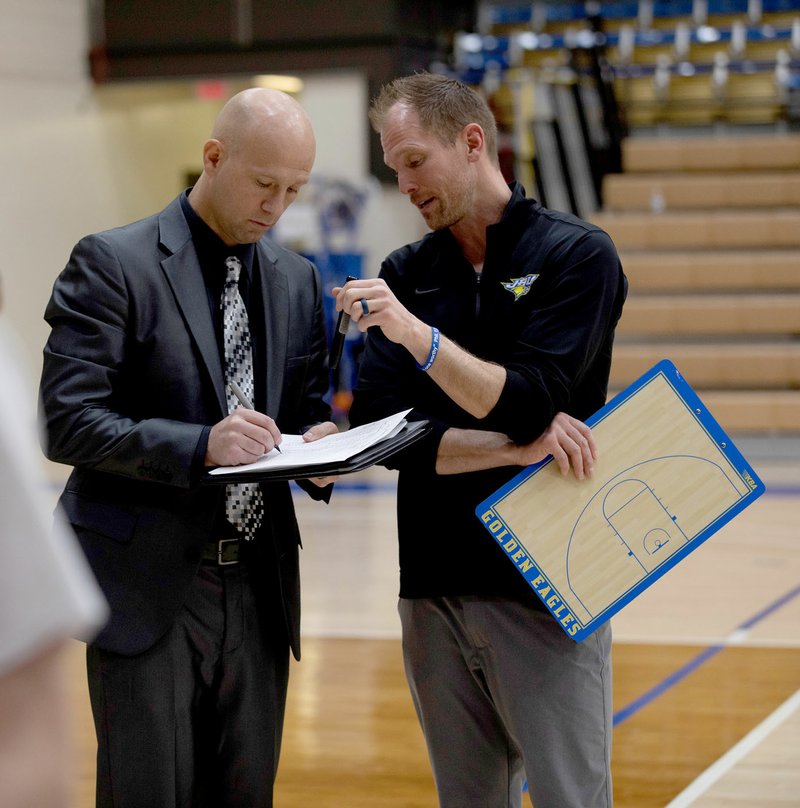 Around the 8 p.m. hour on Wednesday night, Jason Beschta was at home in Siloam Springs trying to get his kids to go to bed.

"Trying to get four stir-crazy kids to go to sleep and moving back into the life role of being a dad and a husband," said Beschta, John Brown University's men's basketball coach.

Beschta -- like a lot of coaches -- is always happy for family time when he can get it, but on this night it was a bit bittersweet.

That time slot on Wednesday when Beschta was putting his kids to sleep was also when his Golden Eagles were originally scheduled to be playing Harris-Stowe (Mo.) in the opening round of the NAIA Men's Basketball National Tournament at Municipal Arena in Kansas City, Mo.

Of course the rest is now history. The NAIA on March 12 canceled all its winter championships -- including the men's basketball tournament -- over growing concerns of the covid-19 (coronavirus) pandemic.

The cancellation ended the Golden Eagles' stellar season, that saw them finish 28-5 overall and finish second in the Sooner Athletic Conference regular season and runner-up in the league's conference tournament.

"I had at least accepted it by (last Wednesday) a lot more," Beschta said. "It doesn't mean it's easy. I'm just trying my best to move past it now."

Beschta said earlier on Wednesday afternoon he was texting with Mid-America Christian coach Josh Gamblin, who's team finished 30-2 overall and 19-1 in SAC play to win the regular season conference title. MACU was the No. 2 overall seed in the national tournament.

"I told him, 'We should be getting ready to play right now,'" Beschta said.

Beschta said the aftermath of the cancellation of the national tournament was a whirlwind for him and his players last week.

On the morning of the cancellation, just before the event was canceled, he and other national tournament coaches were on a conference call with the NAIA regarding hotels, practice arrangements and other tournament details.

"Within the hour it was canceled," he said. "It just went down so fast."

Beschta said most of his players were in class when the tournament was canceled and so a group text was sent out to let them know what happened.

He talked to the team later that afternoon at what would have been a regular practice. Beschta said that meeting with the players didn't delve too deep into the cancellation or reflection of the season, because they were hoping to be able to do a team meal with the players, where they could talk through things and honor the seniors properly.

That all changed shortly after when John Brown University announced that it was going to online classes for the rest of the semester and sending students home.

"Everything just kept cascading," Beschta said, "and all these things, we didn't really get to have an ending to the year, even when we knew it was over."

Since then, most of the sports world has shut down most everywhere, including at JBU. The Sooner Athletic Conference has suspended all activities indefinitely, and there's no timetable for when things will resume.

The team tied a program record with 28 wins, and Beschta believes had it been allowed to play out its schedule it could have won possibly 30 games.

JBU finished 17-3 in the SAC behind Mid-America Christian.

"Any other year that would have won the league," Beschta said. "To win 28 games, be the runner-up in the conference tournament, we were excited about a chance in the national tournament. We thought we would have a chance to go on a run. We would have loved to get 30 wins."

Overall, they finished No. 9 in the nation in the NAIA's final coaches' poll released on March 11.

Sophomore guard Luke Harper (17.2 points per game) and junior Densier Carnes (15.2 points and 8.8 rebounds per game) were named to the Sooner Athletic Conference First Team and Carnes was voted the SAC Defensive Player of the Year.

"We had two kids on first team all-conference and that's never happened," Beschta said. "It's just a testament to the grit of this group, the fight of this group all year long. We just kept building belief."

The Golden Eagles should be in good shape to go on another run next season. They lose seniors Quintin Bailey, Kiree Hutchings and Dwayne Hart.

But Harper and Carnes are slated to return as is guard Rokas Grabliauskas (10.4 ppg) and other key contributors like sophomore guard Ira Perrier and freshman post Nemanja Obradovic and freshman guard James Beckom.

The Golden Eagles also should get back forward Brenton Toussaint, who missed the entire season recovering from a knee injury suffered in the 2018-19 season.

"We've certainly got the tools," Beschta said. "I think it really gives us a great chance to push to get to that national tournament. It's going to look different with only 16 in the end going to Kansas City, but we'll try to get in the opening rounds and go from there."

Print Headline: Disappointed but not defeated