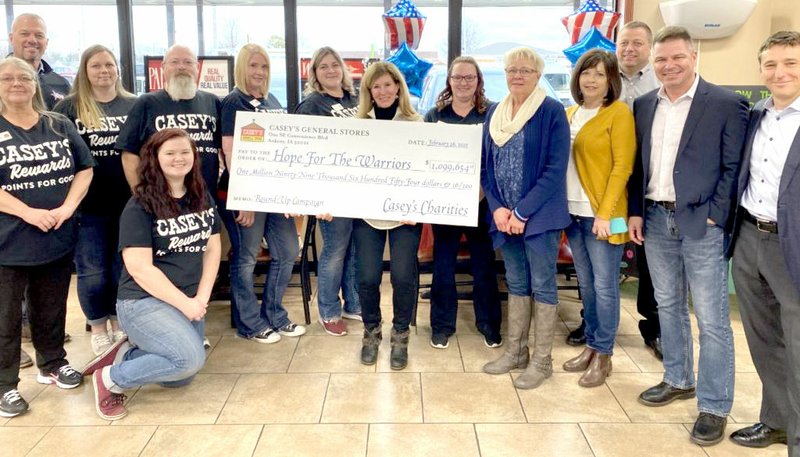 Photo Submitted Robin Kelleher (center), president and CEO of Hope for the Warriors, accepts a $1.1 million check from Casey’s corporate leaders and local employees. The national check presentation took place in Siloam Springs because the local Casey’s raised $4,450, the highest amount of any of the more than 2,000 Casey’s stores in the country.

Casey’s General Stores presented a $1.1 million check to Hope for the Warriors at the Casey’s in Siloam Springs on Feb. 26.

The national check presentation took place in Siloam Springs because the local store raised $4,450, the highest amount of any of the more than 2,000 Casey’s stores in the country, according to a press release sent by Erin McCloskey, media consultant for Hope for the Warriors. The campaign in Casey’s stores ran from Nov. 1 through Nov. 15, said Robin Kelleher, cofounder and president of Hope for the Warriors.

"It feels great," Randie Toto, general manager for the Siloam Springs store said. "We're number one. We've been number one three years in a row."

Toto said three associates raised the largest amounts -- Robert Brown, Jackie Davis and Rebecca Lamb each raised $1,000 during the 15-day campaign. Toto kept associates motivated by having mini-contests such as offering a free large pizza to whoever raised the most during their shift.

Toto thanked the community for their generosity during the campaign. She said there aren't any veterans working in the Siloam Springs store, but many of the customers are veterans.