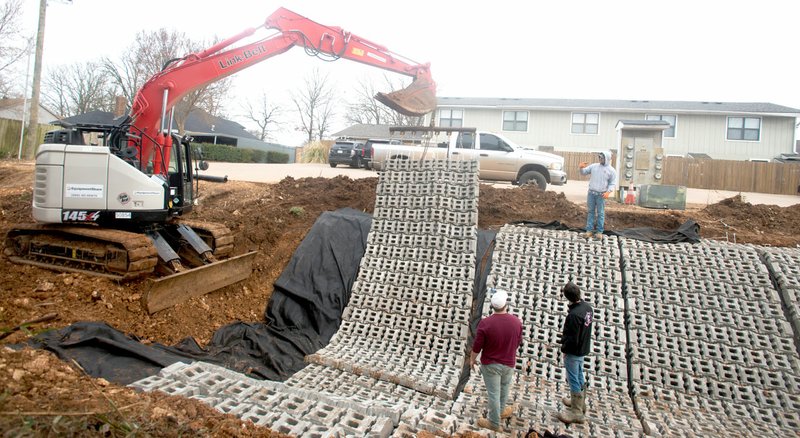 Samual Pyeatte/Special to the Herald-Leader City street workers lay down a patch of Armorflex Open Cell concrete blocks in the drainage ditch located between 1901 and 1909 West Jefferson Street. The blocks are designed to allow water to soak back in instead of letting it just build up and possibly flood the street.

Siloam Springs recently built a drainage ditch with a material the city has never used before that allows storm water to soak into the ground.

The drainage ditch, which spans from 1901 to 1909 W. Jefferson St., was upgraded with a porous concrete blanket made by ArmorFlex, according to Justin Bland, city engineer.

"The reason we are using that instead of solid concrete is when we got the permit back from the (U.S. Army) Corps of Engineers," Bland said, "they wanted us to use something that the water can soak back in."

Bland estimates the ArmorFlex blocks were 10 percent to 20 percent higher than what the concrete-lined channel would have cost. The total cost of the project was $239,198 or $10.08 per block, he said. The ArmorFlex blocks are precast concrete blocks, which have cables holding them together so they can be laid on the ground, Bland said.

The materials used are ArmorFlex-Open Cell blocks, which look similar to traditional concrete blocks, and will allow water to pass through quickly and also allow grass and other vegetation to grow through, according to product images from conteches.com.

When asked whether green spaces are preferable to concrete spaces, Bland said both have their place and concrete does allow for more storm water to be carried through, but it does not help with water quality.

"We typically prefer grass-lined channels due to them being less costly and better for water quality," Bland said.

He also said there was not enough space for a traditional grass-lined ditch because it wouldn't carry enough water. This is why the city decided to use a concrete-lined channel, but compromised with the Corps of Engineers and used a porous concrete blanket.

The importance of having storm water soak into the ground is to deter pollutants from entering into creeks and streams, according to Casey Rector, program manager for the Illinois River Watershed Project (IRWP). When surfaces like parking lots and streets are built with traditional concrete they do not absorb storm water into the ground, but rather storm water will travel to the lowest point on the ground which is typically the city's creeks, Rector said.

The ArmorFlex blocks are articulate concrete blocks and are designed per Federal Highway Administration guidelines, according to Sarah Kellert, a bridge consultant at Contech. The blocks were developed in 1978, and are designed to last 75-100 years, Kellert said.

"It can grow grass and look aesthetically pleasing. You can mow over it," Kellert said.

Kellert said she has worked with the city for several years and the two entities agreed on using the ArmorFlex blocks because they are the most cost-effective solution that met the design requirements of the project.

Print Headline: Drainage Ditch first of its kind in city