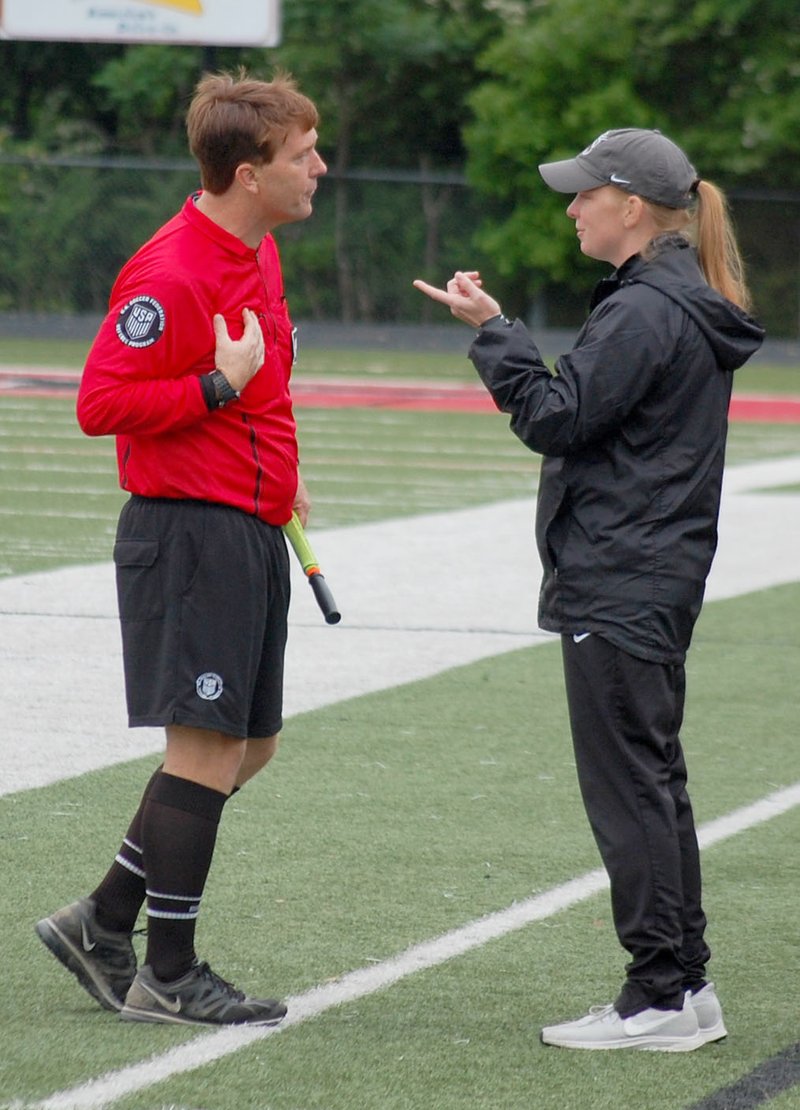 Graham Thomas/Herald-Leader Siloam Springs head girls soccer coach Abby Ray discusses a play with an official during the state soccer tournament last spring. Ray and the Lady Panthers had not gotten to play a home game this season before it was halted on March 13.

After a tough opening week to the 2020 season, the Siloam Springs girls soccer team broke out offensively for a 7-0 win at Van Buren on March 10.

Nobody knew it then, but that would be the Lady Panthers' final game for the foreseeable future.

The threat of the coronavirus put all sports' season on hold, and last Friday the Arkansas Activities Association announced that its current dead period for athletics was extended until at least April 17.

"It's hard to remain optimistic in such uncertain times," Ray said, "but as a team we are clinging to the hope that we will still get to play this season."

Siloam Springs is 1-3-1 on the season, and all five games have been on the road. The Lady Panthers' home opener on March 13 against Beebe was the first to get postponed.

Due to the dead period, Ray said the Lady Panthers are having to work out individually to try and stay in shape.

"The girls are training on their own to maintain the fitness and skills we worked months to build," Ray said. "We are one. To be apart is crushing. We all just want to be together again. We want the opportunity to compete as a team."

Shelby Johnson leads the team with three goals, all scored against Van Buren.

The Siloam Springs boys soccer team had one last practice on Monday, March 16, before all schools were mandated to dismiss over concerns over the coronavirus.

Head coach Luke Shoemaker used the time to get on the same page with his players about the next few weeks being away from school, including spring break this week.

"We met before we went out (to practice), I gave them their two-week workout plan," Shoemaker said. "It was a different packetsof things and different touch series and passings. I just gave them the message that there's a couple ways to look at this. One is we can believe that we're never going to have a season and then have to come back and all of the sudden we have games to play. Or we can hold on hope they can finish their season and they can be prepared and the best way to do that is to keep working.

"Most of it was about encouraging them that our season is not over until someone tells us it is. They don't want to think that it's over."

So far several of the Panthers have heeded the head coach's message. They've sent him pictures of their workouts individually which he has shared on social media.

"It's been a fun day," he said last week. "I've had them send me pictures of me doing stuff at the futsal court or in back yard or whatever it might be."

Julio Maldonado leads the team with five goals, while Danny Daughtery has three and Christian Ruiz has two. Jose Posada leads with five assists, while Franklin Cortez, Christian Flores and Daughtery each have three.

Print Headline: Soccer players having to work on their own