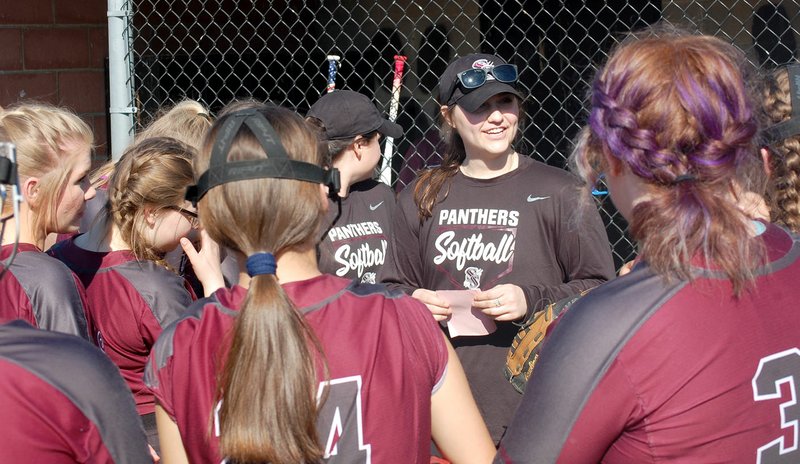 The Siloam Springs girls softball team defeated Greenland 14-4 on March 2 and Huntsville 6-4 on March 10 to improve to 2-0 for the first time since the 2016 season.

It looks like the Lady Panthers are going to stay 2-0 for a while.

The Arkansas Activities Association announced last Friday that its dead period over concerns of the coronavirus would extend until April 17.

For the Siloam Springs softball team, that means their next scheduled game is April 20 at Rogers Heritage.

First-year head coach Emily Grace Ruggeri said the team held a bonding event on March 13 where she and assistant coach Haylee Hall met with the team to eat and have fun.

"We played games and talked, hoping to build strong relationships that will last," Ruggeri said.

She also said they discussed the realities of what they're facing with the coronavirus.

"We discussed everything going and what that means for us as a team," Ruggeri said. "Everyone is disappointed by the situation, especially after our season got off to such a positive start. But we understand these circumstances are bigger than softball."

The Lady Panthers' good start is significant considering the team has only won seven games combined in the three previous seasons.

Ruggeri said the Lady Panthers are anxious to continue their recent good work. Their next scheduled game is April 20 against Rogers Heritage.

"All of us look forward to getting back on the field whenever that may be," she said.

In the win against Greenland in the season opener, Kennedy Wilkie and Sydney Smith each had four hits for the Lady Panthers, while Hilarie Buffington and Alexis Samarin each had three hits and Ericka Galloway two hits.

Micah Curry and Maggie Torres also had base hits as the Lady Panthers had 18 hits as a team.

Smith and Samarin each had four RBIs, while Buffington and Curry each had two RBIs. Wilkie and Torres also had RBIs.

Wilkie went the distance for Siloam Springs in the circle with eight strikeouts. She gave up nine hits with four walks.

Wilkie (2-0) went the distance in the Lady Panthers' home opener against Huntsville, collecting five strikeouts and giving up seven hits.