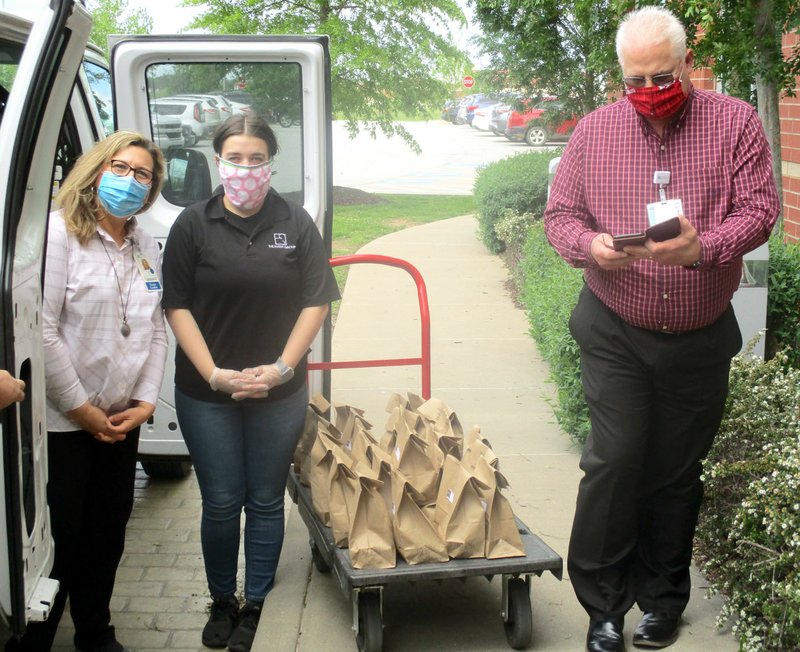 Marc Hayot/Herald Leader Maria Wleklinski, chief nursing officer (left); Sarah Murphy, manager for Event Group Catering; and Scott Harris, materials management director pose for a photo with meals delivered by Event Group Catering through donations made by the Arkansas Philharmonic Orchestra. The orchestra's patrons donated $9 per meal for those who work at various healthcare facilities, one of which is Siloam Springs Regional Hospital.

Event Group Catering has teamed with the Arkansas Philharmonic Orchestra to provide meals to hospitals and medical clinics, one of which is Siloam Springs Regional Hospital.

"We don't mind delivering them to anybody on the front line," Morrison said..

"I have a great-aunt who is there and some nursing friends on the staff," she said.

"We started with asking our patrons to donate $9 a meal and it kind of grew," Miller said.

Anyone wishing to donate to this project may do so through the orchestra's website at https://stubs.net/event/3014/catered-meals-for-healthcare-and-musician-s-relief-fund.