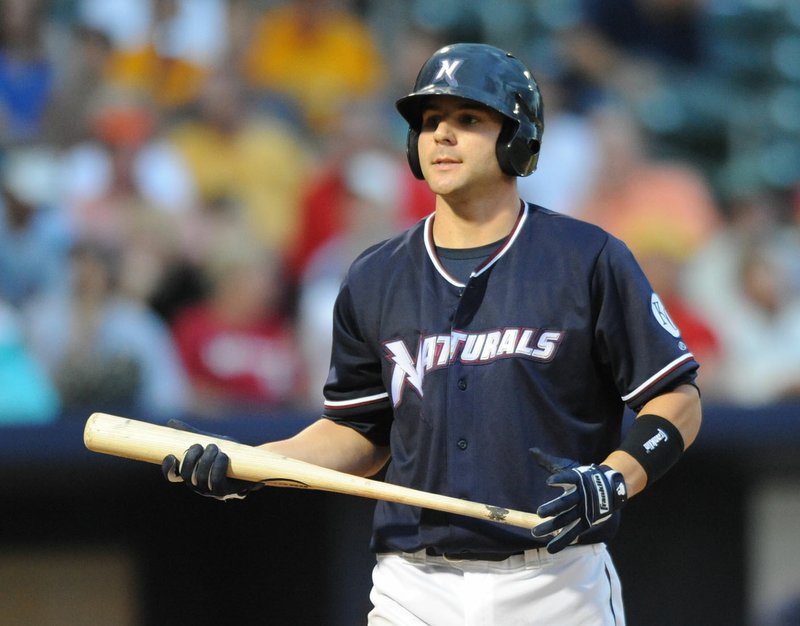 STAFF PHOTO ANDY SHUPE Jamie Romak, who played for the Northwest Arkansas Naturals in 2010 and 2011, started his fourth season in the Korea Baseball Organization. He's become one of the top sluggers and a fan favorite in the KBO.

Jamie Romak's professional baseball career has taken its share of twists and turns over 18 seasons, including one that led him to Northwest Arkansas where he finally shook several seasons worth of injuries to gain traction.

The Canadian is far away from Springdale's Arvest Ballpark today, starring for the SK Wyverns of the Korea Baseball Organization. He began his fourth season in the KBO earlier this past week as much of the sports world, starving for live events in the wake of the coronavirus pandemic, focused on South Korea.

• The Korea Baseball Organization, formed in 1982, is comprised of 10 teams with no divisions and the regular season is 144 games. Teams are allowed only three foreign players per team at a time.

• The SK Wyverns, which Jamie Romak is a member, lost their ace pitcher Kwang Hyun Kim in the offseason when he signed a two-year contract with the St. Louis Cardinals.

• Games will be played with no fans in the stands.

• Current Wyverns Manager Trey Hillman led the team to the Korean Series title in 2018, after also winning the Japan Series as manager of the Hokkaido Nippon-Ham Fighters in 2006. He also managed the Kansas City Royals from 2008-10, making him the only person to manage in Korea, Japan and MLB.

The slugging first baseman has carved out a reputation in the KBO as one of the top home run hitters over the past three seasons, enjoying a monster year in 2018 when he hit .316 with 43 home runs, 143 RBI and 102 runs scored. He became the first person in league history to hit .300, hit at least 40 home runs and total 100 RBI and runs scored.

He's become a superstar with a million-dollar contract and a face that's recognized on the street in Incheon -- a city of almost 3 million people.

Recently a man and his son raced down the street to catch him for a hello and a handshake.

Romak, 34, recalls his time in Springdale fondly -- both on and off the diamond.

"It was a beautiful ballpark and a great place for a guy like myself who didn't come from a large city," Romak said. "There were a lot of positives, I really enjoyed it there."

The baseball was good, too.

He was promoted early in the second half to Northwest Arkansas in 2010, which was the year the Naturals won the Texas League Championship. And Romak soaked up the experience on a team of budding superstars who would go on to help the Kansas City Royals become world champions in 2015.

"Being on that great championship team that's the thing that stood out," Romak said. "Being a small part of that group of guys. They, not I, went on to change the culture of Kansas City Royals baseball. So many of us off that 2010 team went on to play in the major leagues."

Romak was promoted when Mike Moustakas got the bump to Class AAA Omaha. Moustakas would later be named Texas League Player of the Year. Eric Hosmer, another future major leaguer, also got promoted mid-season to the Naturals.

Steven Davis, the voice of the Naturals from 2008-13, said Romak was the one who stepped into Moustakas' position at third base in 2010, but he really blossomed in 2011.

"Moose was the big story, he went crazy in the first half," Davis said. "Then Hosmer came up to replace Moose. He was the highly ranked prospect. But Jamie Romak was the guy who started at third base and played pretty well.

"Then he really got it going in 2011 and was a huge part of that team. He was a guy in the middle of the lineup and a leader in the clubhouse that guys looked up to and respected. You want to have as many Jamie Romaks on your team as you can. He's personable, and he'll get in there and grind and work every day."

Davis saw 10 years ago how self-aware Romak was on the diamond, and that's played out nicely for him as he chose to go to Korea.

"Jamie knows who he is as a baseball player," Davis said. "He's able to fit in and comfortable playing to his strengths."

Romak was slowed by injuries early in his career and acknowledged that 2010 was the first season he was able to play straight through the season without any interruptions.

"I was drafted when I was 17, so that's seven years of intermittent or disrupted seasons," Romak said. "I was 23, 24 and the clock was ticking."

He managed a combined 39 major league at-bats in 2014 and 2015 when he played with the Los Angeles Dodgers and the Arizona Diamondbacks. He then tried a year in Japan before finding his niche in South Korea in 2017.

While the spread of the coronavirus has been limited, it's keeping Romak and his family apart.

His wife Kristin remains in Canada with his newborn son, Pierce, and 3-year-old son, Nash. He was present for the birth of his second son in March but left for Korea when the world started shutting down.

"Literally days later they shut all the flights down from Toronto to Korea," Romak said.

Fortunately life in Incheon, where he lives, is now back to normal.

"It crosses my mind on a daily basis," Romak said. "We get our temperature checked when we get to the field, probably twice a day. I do wear a mask. To be honest, I think it's more socially obligated. I see everyone else doing it. I don't want to make anyone uncomfortable, especially as a foreign person."

The bottom line for Romak is that he's never taken any day for granted in his baseball career.

"It's just crazy to think where it's come from where I started as a kid," Romak said. "Back home in Canada where I played 2-on-2 baseball with a tennis ball in the schoolyard with my three best buddies. It's evolved into a lot more than that, but I'm still the same kid who just loves it."