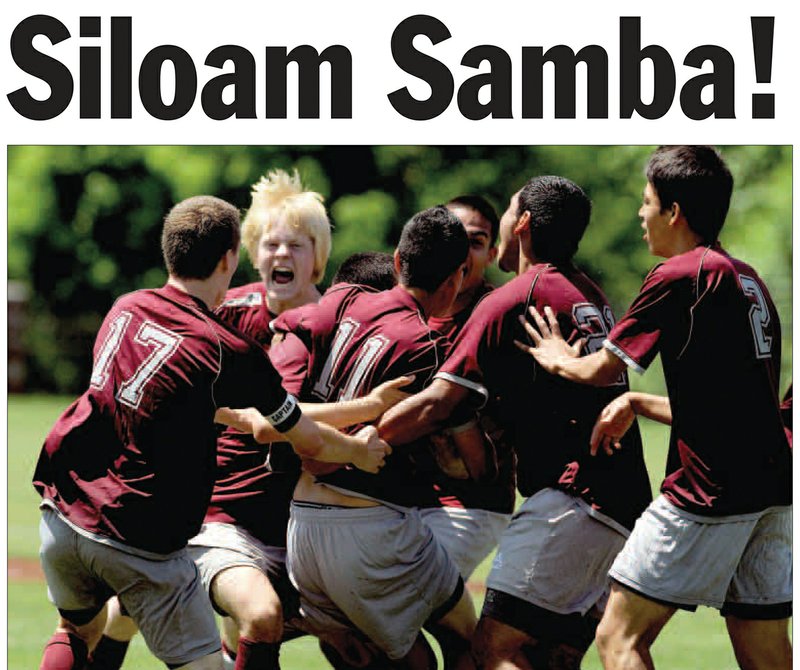 Some of my best memories as a sportswriter have come from covering the Siloam Springs boys soccer team over the last 11 seasons.

And what a ride it's been.

During that time, by my count, the Panthers have played 235 games, winning 160 of them for a winning percentage of .680.

Since the spring of 2010, my first year on the beat full-time, the Panthers have played in the state championship game eight times and have won four of those.

They've won numerous conference championships, racked up a bus load of individual and team awards and are one of the most respected boys soccer programs in the state of Arkansas.

Siloam Springs truly is a powerhouse.

This past week I've been researching this column, going back and re-living some of the highlights as well as the tough times, remembering great players -- even some when they were just young kids -- and basically re-living the last decade of Panther soccer from beginning to end.

Much like with the hallmarks of volleyball season and the column on Panther football, there's no way to get every single great moment or memory into a piece like this. But I hope this story can help us remember some of these great moments and great Panthers.

And then there's the pre-game battle cry: "We like to Samba."

Can you hear it?

Can you see the Panthers in your mind? Circled up, the Panthers say their pre-game prayer and then linked together begin jumping in unison and repeating over and over those four words -- We like to Samba -- before bringing it in for one last call-up.

Coaches have come and gone throughout the program. Players have moved through, but the Samba has never left, and it never will.

Senior reserve Brian Frias' goal with exactly five minutes left in the extra time period gave the Panthers the win and exorcised some past demons in the process.

In the previous seven seasons, the Panthers had lost 1-0 to end each of their seasons, including twice in the state finals in 2005 and 2007.

"All the heartbreak years, all those 1-0 losses in the last second, seven years straight somebody's beat us 1-0," said Siloam Springs coach Jason Bowen. "Finally we were the heartbreaker today."

The Panthers won their title a little after noon on that Saturday, but it was originally supposed to be played that Friday night. A tremendous round of thunderstorms moved through Northwest Arkansas on Friday and moved the game to Saturday morning. That was the only available time slot for Siloam Springs as the high school's graduation was later that day just up the road at Barnhill Arena.

It was hot and muggy out on the field itself, and both the Panthers and the Rams had chances to score in regulation.

Finally, the Panthers broke through and the dogpile celebration was epic.

I've covered a lot of state championship teams in my career and this one is among my favorites just because of the emotion involved.

It truly was a special day.

• 2012 -- With all the drama and suspense of the Panthers' first state championship the year before, the rematch with Hot Springs Lakeside didn't provide quite the drama, but it was still plenty of fun.

State Tournament MVP Mario Flores' header off a Mike Vasquez cornerkick about a minute and a half into second half gave the Panthers their first goal.

"That's exactly what we needed," Flores said of the score. "As soon as I saw the ball, I said 'this is it,'" Flores said. "I went out and got it in. The team tempo went straight up. We dominated from there."

The previous year's state tournament MVP Gustavo Peraza scored around 10 minutes later to give the Panthers a 2-0 lead, which would end up being the final score of the game.

Siloam Springs' defense recorded its 12th shutout of the season as well, in what was a great Saturday morning for the Panthers.

Aldair Umana's rocket from outside the 18-yard box gave Siloam Springs its first goal in the 50th minute. Ricardo Aguilar added an insurance goal later in the second half as the Panthers avenged its 2015 loss to the Cyclones in the state title game.

"It's a great feeling definitely after coming back from two tough losses my freshman year and junior year," said Umana, who was a freshman on the 2013 team that lost 3-2 to Searcy and a junior on the 2015 team. "It really hurt us a lot. I think it's what pushed the seniors and a lot of the underclassmen, who were there last year, to come out and play the best we could. We as a team knew that if we played how we know how to play, it would have been a good day for us."

It was the first boys state title under coach Brent Crenshaw, who earlier in the day had won his first career state title with the Siloam Springs' girls' victory over Russellville.

• 2017 -- The Panthers defended their championship in 2017 with a 4-0 win over Mountain Home in the state finals, and sophomore Eli Jackson stole the show.

Jackson scored a hat trick, scoring three of the Panthers' four goals and Christian Marroquin added another goal on a penalty kick for the Panthers, who won their fourth state title.

"It's hard to describe the feeling," said senior midfielder Austin Shull, who assisted on the Panthers' third goal of the day. "It's kind of like Christmas morning when you wake up, you know, you're so excited? We all were so excited for this game. We knew that Mountain Home was going to play aggressive. We knew they were going to play hard. We just knew we needed to play our game and just play how we always play, which is quick. It ended up working for us."

The win was a program record 21st for Siloam Springs, which finished 21-5-1 on the season.

I wrote last Sunday about the kicks from the spot victory over Little Rock Hall to reach the state title game. This one, though, was never in doubt.

And just like in 2016, it was a two-victory day for Siloam Springs soccer as the Siloam Springs girls won their fourth straight state title in the next game.

There have been several men at the helm of the Siloam Springs boys soccer program and several good assistants working alongside.

Of course Jason Bowen gets a lot of credit.

His work turned the program into a contender in the mid-2000s and the Panthers crashed through in 2011 with the state title and another in 2012.

Siloam Springs was leading Searcy 2-0 in the 2013 state title game and looking for a three-peat when the Lions rallied for a 3-2 victory.

Bowen's exit as coach in 2015 right before the season started could have been a devastating blow to Siloam Springs, but Chuck Jones was there to save the day.

Jones, a former SSHS soccer assistant, took a leave of absence as head track coach and returned to soccer and helped lead the Panthers and Lady Panthers back to the Class 6A state title game. The girls won their title and the boys couldn't hold a 1-0 lead and lost 2-1 to Russellville in a heartbreaker.

I'll never forget the 2015 end-of-the-year banquet with Jones at the podium saying goodbye as he informed the soccer family he would return to the track program for 2016. There wasn't a dry eye in the room.

Brent Crenshaw entered the scene and guided the Panthers to two state titles in 2016 and 2017 and Siloam Springs was state runner-up in 2018. He also won three state titles with the SSHS girls.

Shoemaker, was assistant coach from 2014-2017 under Bowen, Jones and Crenshaw, but left to become head boys coach at Greenwood for 2018.

When the Siloam Springs job came open after Crenshaw resigned, it wasn't a big secret that Shoe was coming back.

Under Shoemaker in 2019, the Panthers won 18 games and reached the state title game again, losing to Russellville 1-0.

All of these men worked their tails off to take this program to the level its at, and I have tremendous respect for all of them.

One of my favorite coach-speak quotes is, "It's not always about the X's and the O's, but about the Jimmys and the Joes."

Coaches in Siloam Springs will tell you they've certainly had plenty of talented players over the years.

I could spend an entire sports section talking about all the talented players to circle up over the years and cry out, "We like to Samba."

I think about when I first got on the beat there was Gustavo Peraza. What a magician with a soccer ball he was from 2010 to 2012. Peraza was state tournament MVP in 2011 and maybe the most talented player in the history of the program.

Oh, and Gus is still around, helping out Panthers soccer as a volunteer coach.

He had lots of help. I think about Will Easley, Mario Flores, Collin Matheny, Alejandro "Pulga" Dominguez and Abraham Aguirre, just to name a few. I'm sure there are names I am omitting, and I do apologize.

How about James Pollard? Pollard came onto the scene for the boys soccer team as a freshman and helped the Panthers win a state title in 2012 and made a lasting impact on the program. I'll never forget doing stories as late as 2016 and 2017, a few years after Pollard graduated, and kids were still aspiring to play to his example. Now that is leaving a legacy. Pollard by the way is now on staff as boys assistant under Shoemaker.

Aldair Umana was NWA Media's Newcomer of the Year in 2013 as a freshman, and as a senior he helped the Panthers win the state title in 2016.

Ricardo Aguilar may have been the most dangerous player in that 2015-2016 run. No doubt he was a key piece in the Panthers' success. I have fond memories of interviewing him for a feature and Aldair Umana translating for me.

More recent stars like Christian Marroquin, the 2017 NWA Democrat-Gazette Newcomer of the Year and an outstanding attacking player.

We talked earlier about Eli Jackson and the impact he had so early in his career as a sophomore on that 2017.

And then there's big Jack Bos, who helped anchor the Panthers' back line. Jackson and Bos are still teammates at John Brown University.

There are so many more great kids who aren't named here that deserve to be. Each one important.

What a program. What a team. I'm thankful to have been able to get a sideline view of the journey.

-- Graham Thomas is the managing editor for the Herald-Leader. He can be reached at [email protected] The opinions expressed are those of the author.