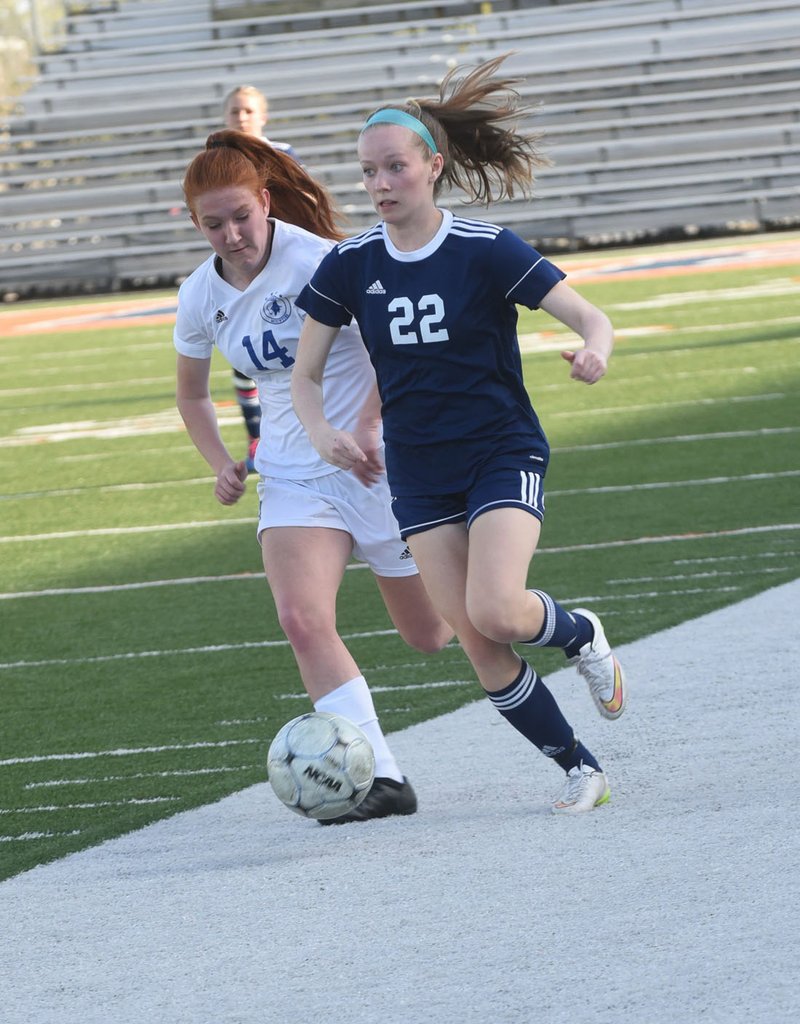 NWA Democrat-Gazette/FLIP PUTTHOFF Pam Seiler (22) was a two-sport standout in basketball and soccer for Rogers Heritage. She finished with 22 goals and 11 assists last season and earned All Arkansas Preps honors.

But the coronavirus pandemic put an unexpected end to her high school athletic career, like many across the country.

NOTEWORTHY: Signed to play soccer at John Brown University. … Earned Arkansas Democrat-Gazette All-Arkansas Preps honors in soccer as a junior. …. Bounced back from an injury-plagued junior season in basketball to put together a strong season in soccer and was named Northwest Arkansas Democrat-Gazette Girls Soccer Player of the Year. … Scored a 32 on the ACT and finished with a 4.2 grade-point average and eighth in a class of 450. … In soccer, had 19 goals and 7 assists as a sophomore, and 22 goals and 11 assists as a junior. … Helped lead the Lady War Eagles basketball team to the state tournament for the second time in school history this season.

But it's not the end. She's quickly changed gears to begin preparing for college soccer at John Brown University in Siloam Springs.

Seiler started with the workout she received from the John Brown coaches but didn't stop there. She connected with a few of her future teammates who were still living in Northwest Arkansas even though classes on campus had been canceled.

Senior Vanessa Reynoso, who played high school soccer at Springdale Har-Ber, was a leader of the group, Seiler said.

"We were doing more technical training at Veterans Park," Seiler said. "We did it on our own and I loved it. It was good to meet the girls and get to know some of them before we all get together in August.

"We've been able to have group chats and I've been able to ask them about classes, too. The senior -- we call her 'Chicken' -- she took it upon herself to get us together. It's been great."

Even though she's excited for the future, Seiler admitted it was hard to have her senior season wiped out. She was hoping to break the single-season school record for points, after falling seven short a year ago.

Seiler was confident coming into the season, and so was Heritage Coach Skye Stover.

"This season felt like everything was falling into place," Stover said. "I had gone to a few basketball games and I knew she had definitely gotten faster. More than anything, I could see more maturity."

Seiler missed her soccer team's season-opener against Tulsa Union as the Lady War Eagle basketball team was eliminated in the opening round of the Class 6A state tournament. But she was with her soccer teammates just two days later. Heritage went 0-2-1 in a tournament at Harrison but battled to a 2-2 tie with the defending 4A state champion Lady Goblins.

Seiler had three goals and an assist in those three matches, and she showed off her leadership skills as well, Stover said.

"When she came in with some of the other basketball girls, they established a standard of, 'This is how we practice and play 100 percent of the time,' " Stover said. "You could see Pam's ability to talk to her teammates at the Harrison tournament.

"She has the soccer knowledge that's developed, and she's breaking it down on her own."

The 5-6 forward specifically wanted to work on her speed and finishing goals. She improved her scoring numbers each of the previous two seasons. Seiler led the 6A-West Conference with 19 goals to go with seven assists as a sophomore and followed that with 22 goals and 11 assists last season to earn Arkansas Democrat-Gazette All-Arkansas Preps honors.

Seiler credited more weight training with the basketball team and more dedication to cardio workouts for her improved speed.

"I used to have weekends where I would just chill," Seiler said. "I just started going on runs around the neighborhood. More distance than sprints. I didn't do that much last year, but I think it really helped me."

Seiler got healthy in the spring and keyed the Lady War Eagles' attack to help Heritage earn a state tournament berth. She also decided to push to play soccer in college and committed to John Brown.

"I went to a soccer camp at JBU and just fell in love with it," Seiler said. "In the end, it was just the right fit for me. But really when I was thinking about soccer or basketball, it was a case of I physically enjoy soccer more and it brings me more happiness."

As she moves on, there's still a sadness about the lost season and lost opportunities, Seiler said.

"I just have to remember I'm very lucky this isn't the end of my soccer career," Seiler said. "I just try and think of the big picture and how a lot of other people are in danger. And not being able to play a sport is nothing compared to people getting this virus. I just try to put things in perspective."

Seiler said the hardest part of having her senior season cut short was being away from her teammates.

"It's very hard to talk to my friends and teammates," Seiler said. "It's sad we didn't get to play our last year together. We just have to remember all the good times we did have and try to think of them more than the sad times."