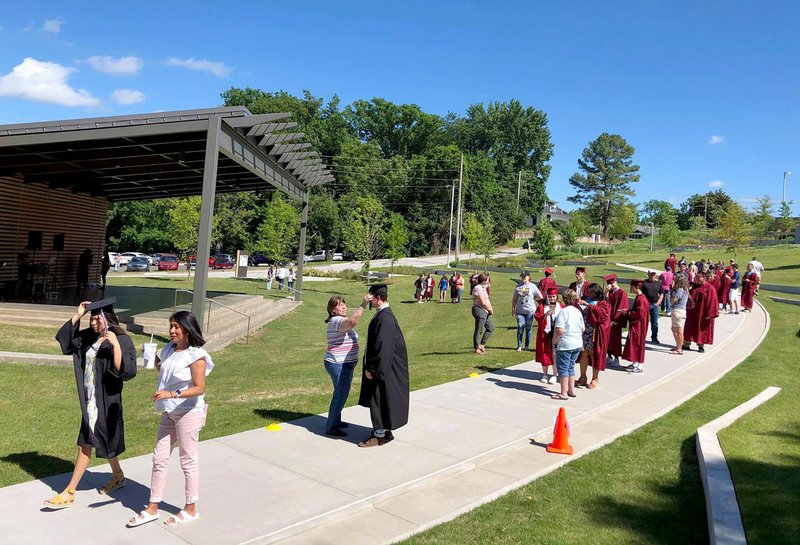 Photos submitted Students line up six feet apart in Memorial Park on Sunday for free graduation portraits in their caps and gowns by Luke Davis, owner of Main Street Photography.

Davis, who owns Main Street Photography in Siloam Springs, set up a free photo shoot in Memorial Park with careful social distancing practices in place to give back to seniors who have had "a bummer of a senior year," he said. The event was originally scheduled for Saturday, but rainy weather moved it to Sunday.

More than 110 graduates from 14 different schools, including high schools in Arkansas and Oklahoma, John Brown University and local kindergartens, lined up six-feet apart for the photos, Davis said. The only requirement to receive two free portraits was that graduates had to be wearing their caps and gowns, he said.

Davis came up with the idea from a client who was disappointed their child's kindergarten graduation was canceled and asked him to take a cap and gown photo of their student, he said.

"I was like, you know, I bet everybody is kind of in the same boat, let's just do something all at once and I'll do it for free," he said.

In Siloam Springs, high school graduation has been tentatively rescheduled for 8 p.m. Friday, July 17. JBU has postponed commencement ceremonies until the fall, but has yet to set a date.

Davis said he had a great team that helped with the event, including Monica Jackson, who kept everything organized; Joey Hunter, who kept lines moving and made sure people were social distancing; and DJ Bear Klenda, who kept the music and entertainment going for those waiting in line. Together they took the photos of 90 students in the first 90 minutes and then students kept trickling in, he said.

"I am a big fan of people using their skills and talents to give back to others. ... My specific skill is photography. I am happy to help give back to those who had kind of a bummer of a senior year," Davis said.