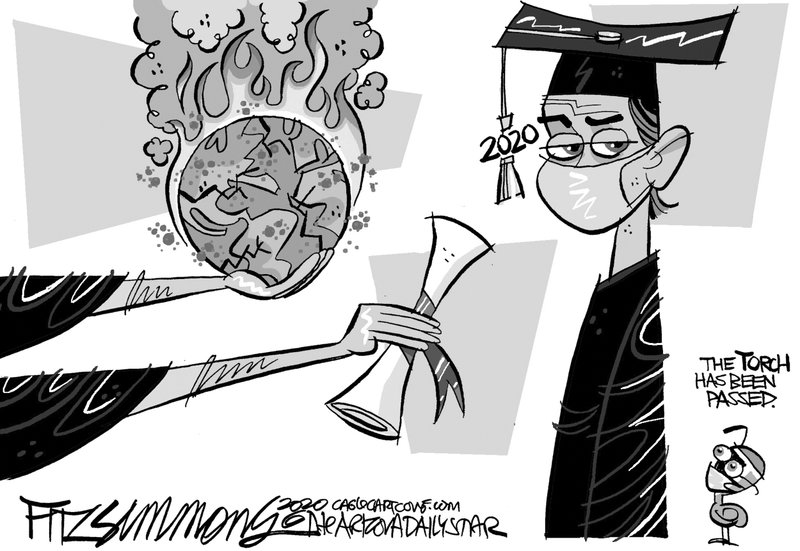 I don't know how many times I've told my out-of-state friends that Northwest Arkansas is the best place to be in a viral pandemic. The population of Benton County is densest around the Bentonville-Rogers area but, if one travels a few miles west, you encounter farms and homes with plenty of space between them. I guess we all practiced social distancing before it was fashionable -- or mandated.

I admit I've been a little smug. I felt secure. After all, a country boy can survive, right? If it comes down to every person for himself, then I can hunker down with family and wait for better times.

But is that what we want to become? Isolated pockets of humanity sheltering from others? View everyone else as a threat? Viewed from a social standpoint, maybe we can, but economically it's just not feasible anymore.

Like it or not, our economy, whether local, state, or country, is tied to that of the world. In the late 19th century, a farmer could grow enough food to feed his family and possibly some neighbors. In a good year, he could sell the surplus in the nearest town. Railroads and better highways allowed faster transportation of goods. Now the farmer is a corporation that grows more and ships to other states, even other countries.

We became super-consumers. If we couldn't grow it or make it in America, then we could buy it from another country. Corporations realized their profits were higher if labor costs were lower, so they moved to less developed countries where workers were not so demanding of wages and benefits. Now products are imported and exported all over the world. American business is dependent on the well-being of other countries and their economies.

Money has to flow, as in spent, to be useful. If cash just stays in the bank, it makes your bottom line look good but doesn't stimulate the economy. When people have no money to put into circulation, then the government steps in and hands out the funds. The expectation is that that money will be spent and placed back into circulation. If the river of spending becomes a lake, then the economy stagnates.

I am not a proponent of re-opening the economy purely for the sake of keeping the river of cash flowing. I value human life over financial comfort. I understand perfectly that hardship is inevitable if businesses don't open up. But it's easier to recover from an economic downturn than being dead. If you want to argue the pros and cons, feel free to rant on social media. But perhaps I digress.

Rural life provides a natural distancing. We are, however, social beings. We enjoy communing with others. We can watch the Razorbacks on television in the safety of our homes, but it would be strange not to hear the roar of the crowd or groans of agony that a packed stadium provides. A televised concert is not the same as sitting with fellow humans and experiencing the music unfiltered through satellite and cable wiring. I have watched Les Miserables on television and viewed the play in a London theater. Guess which performance caused tears to well up in my eyes?

I confess to bouts of anxiety concerning our new future that this virus has caused. I don't believe we will return to what we consider "normal." No one can really tell us with certainty what is going to happen. Therein lies the crux of most of our anxiety: the not knowing.

I can convince myself that I am safer from the virus than those in large urban areas, which is valid from a statistical viewpoint. But I am not unaffected. My online business relies on customers from all over the world. When they are affected financially, it affects my livelihood. I cannot isolate myself from the impacts this pandemic has had on others, wherever they are in the world. Multiply my predicament by the number of small and mid-sized businesses in the state, country, and world. Are you more nervous now?

Human connections are measured by more than just physical distance. We can practice social distancing, but we still need financial, emotional, and spiritual interactions. Otherwise, we chance to become a little less human.