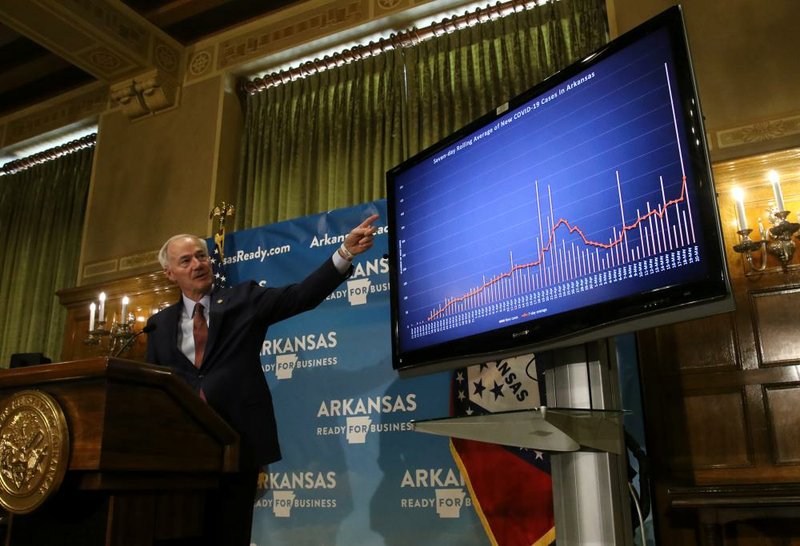 Arkansas' count of coronavirus cases rose Thursday by 455, the largest one-day spike since the state's first infection was found March 11.

The increase included 229 positive results from tests of inmates at the federal prison in Forrest City that were announced earlier, but were just added to the state's official count after information from laboratory reports was entered into a state database.

The remaining 226 noninmate cases was the largest one-day rise in such cases, doubling the previous record of 113 cases that were added on May 14.

Gov. Asa Hutchinson said the increase "is a concern to us."

"We're watching very carefully," he said. "We know that it is reflective of the increased testing, but it's also something that we want to be able to get in and do our contact tracing, make sure that we understand whether this represents a new outbreak somewhere or whether it is just a reflection of increased testing."

At his daily news conference on the pandemic, Hutchinson and Health Secretary Nate Smith also announced rules to allow youth summer camps involving overnight stays to begin May 31 and some types of community and school-sponsored sports activities to resume a day later.

The governor said those rules, like others that have been issued under the state's first phase of lifting restrictions on businesses and social interaction, would help limit transmission of the virus despite the recent uptick.

"We're going to have to learn to manage this economy, and we're also going to have to stop the spread of the virus, and so you've got to do those two things simultaneously," Hutchinson said.

Hutchinson also announced that the Crater of Diamonds State Park in Murfreesboro will reopen today.

And he said the state on Wednesday evening had sent out its first weekly payments of Pandemic Unemployment Assistance to 3,975 gig economy workers, independent contractors and self-employed people.

Another 1,879 who filed claims requested debit cards that will be sent out, he said.

[Video not showing up above? Click here to watch » https://www.youtube.com/watch?v=CHhEO0TXD70]

They were among more than 15,000 claimants as of noon Thursday who had been sent emails notifying them that they could go to a state website to file weekly claims.

The site, pua.arkansas.gov, was shut down May 15 after state officials said they learned that applicants' private information had accidentally been exposed.

The Republican governor also attempted to clarify his remarks at the White House on Wednesday when he was asked about the possibility of allowing no-excuse absentee voting during the November elections as a precaution against the spread of the coronavirus.

Hutchinson said he supported "no-excuse absentee voting," if the coronavirus is still a concern, according to a White House transcript.

That echoed previous remarks Hutchinson has made.

In advance of the March 31 election runoff, he issued an executive order that suspended provisions of state law that set requirements for registered voters who wish to cast absentee ballots.

Those requirements are that the voters must be unavoidably absent or unable to attend an election because of illness or physical disability.

"Certainly if we have a continued emergency I would be open to the possibility of waiving the rules so that we could do the no-excuse absentee voting, which certainly is important and helpful if you have the threat of covid-19," Hutchinson said at one of his daily news conferences last month.

On Thursday, however, Hutchinson said he meant to refer to early voting, not absentee voting, during his visit to the White House.

[Interactive Arkansas map not showing up above? Click here to see it: nwaonline.com/arvirus]

Mail-in voting is "not the law in Arkansas, and there's not broad support for that in my judgment in Arkansas, and we certainly haven't figured out the security issues in regard to that," Hutchinson said.

Hutchinson noted that the new cases among noninmates were spread around the state, rather than concentrated in one area.

The largest number, 33, was in Yell County, which had just 38 cases a day earlier.

Benton County had the next-highest increase, 27, followed by Washington County, which had 26 new cases; Union County with 19; Craighead and Crittenden counties with 17 each; and Pope and Pulaski counties with 13 each.

Hutchinson said the increase in Yell County was "probably associated with the poultry industry breakout there," although more investigation is needed to verify that.

The state Department of Health reported Tuesday that 14 workers at Nebo Poultry in Dardanelle, in Yell County, and Russellville had tested positive.

"A van of workers that were traveling together is where that started," Hutchinson said Thursday.

Whitlow said Tuesday that at least one employee had tested positive, but he declined to say where the employee works and would not divulge the total number of positive cases at the company, which vaccinates poultry.

Smith said the statewide increase is "obviously quite alarming," but he agreed with Hutchinson that it reflects an increase in testing.

This week the Health Department began offering testing at its health units around the state.

He said the department will also conduct weekend community testing events, similar to the one it did in Forrest City on Saturday, in counties where cases have increased.

That includes Saturday in Washington County; May 30 in Crittenden, Jefferson and Sevier counties; and June 6 in Craighead, Pulaski and Union counties.

Health Department spokesman Meg Mirivel said the department will also hold a testing event in Yell County on May 29.

Smith said the department will track down people who have had contact with the people who tested positive, as well as investigate what kinds of activities people had been engaged in -- such as eating at a restaurant or using a gym -- in the 14 days before they tested positive.

"When one thing follows another, there's a strong temptation to link them together," he said.

But he said, "there are many states that have opened up and have not seen a large increase in cases."

He added that, so far, the department hasn't found a link between the eased restrictions and uptick in cases.

In addition to the new cases that were added to the state's total, 63 people who tested positive earlier were classified Thursday as having recovered.

The number of active cases rose by 228, to 543, among prison inmates and by nine, to 94, among nursing home residents.

Among other Arkansans, the number of active cases rose by 152, to 796.

The number of people in the state hospitalized with covid-19 rose by seven, to 86, while the number on ventilators fell by two to 14.

Under the rules for summer camps, staff members and campers are "strongly encouraged" to quarantine themselves at home for 14 days and be tested for the virus up to four days before they arrive at the campground.

Otherwise, all campers 10 and older are required to wear cloth face coverings.

Meals should be provided in accordance with the Health Department's rules for restaurants offering dine-in service.

The camp should promote gatherings that allow for distance between people and separate campers into groups of 10 or fewer.

The rules on sports activities allow practice and competition for "limited contact sports," such as baseball, softball, track, gymnastics and swimming.

For "close-contact" sports -- such as basketball, wrestling, football and soccer -- team practices and competitions remain prohibited, although individual practice is allowed.

Cheerleading and dance are also included under the "close contact" category.

Conditioning and training are allowed as long as participants maintain a distance of 12 feet unless spotting a person lifting weights.

Cloth face coverings are required for coaches, staff members and athletes when they aren't playing.

Athletic events must follow rules that the Health Department issued earlier for indoor and outdoor venues.

Hutchinson said the restrictions on "close-contact" sports will be revisited by June 30. The rules don't apply to college sports, which Hutchinson said is a "separate conversation."

Joel Gill, the executive director of Ferncliff Camp and Conference Center, said the organization's leadership needs time to review the new directives. He couldn't say whether the camp will be open this summer.

"Just because we're allowed to doesn't mean we should or need to," Gill said in an interview Thursday.

Ferncliff operates overnight and day camps in Little Rock that offer Christian faith-based programming, as well as a traveling day camp program that visits other communities.

At the moment, Gill said, Ferncliff has no in-person summer camp programs scheduled.

The Quapaw Area Council of the Boy Scouts of America has delayed the opening of Camp Rockefeller in Damascus until the last two weeks of July, according to executive and CEO Marcal Young.

Camp officials will review the Health Department directives and decide within the next week whether the camp will open this summer, Young said.

"Our first priority is to review the directives and ensure we can keep our staff and campers safe," Young wrote in an email Thursday. "Our Camp and Council is known and is a pacesetter in creating a safe haven for our Scouts."

Brookhill Ranch in Hot Springs plans to open this summer, according to Executive Director Lynlee McMillan.

The camp has implemented preventative measures, including a screening and temperature check at the gate when campers arrive, plus daily screenings and sanitization efforts, McMillan said in an email.

The date for a return to camp programming has yet to be determined, said Kelly Farrell, the agency's chief of interpretation and program services.

In a statement posted on its website, Camp Ozark in Mount Ida said the camp "will not close unless the State of Arkansas mandates a closure." Camp Ozark representatives did not respond to requests for comment via phone and email Thursday.

A report from the Pulaski County coroner's office also identified a resident of a Little Rock nursing home as among those who have died of the virus this week.

Norma Campbell, a resident of Allay Nursing and Rehabilitation in Little Rock, died Thursday afternoon in the medical-surgical unit at Baptist Health Medical Center in Little Rock, according to the report.

She was admitted to the hospital that day for treatment of shortness of breath. Campbell suffered from pneumonia, hypertension and Alzheimer's disease, according to the report.

Health Department reports indicate that she was the second resident of the nursing home to die from the virus.

A total of six residents and five workers at the facility have tested positive, according to the reports.

The Health Department reports also indicate that 13 residents of The Waters of White Hall had died from the virus as of Thursday, up from 12 a day earlier.

A total of 45 residents of nursing homes or assisted-living facilities have died from the virus, according to the reports.

Information for this article was contributed by Jeannie Roberts of the Arkansas Democrat-Gazette. 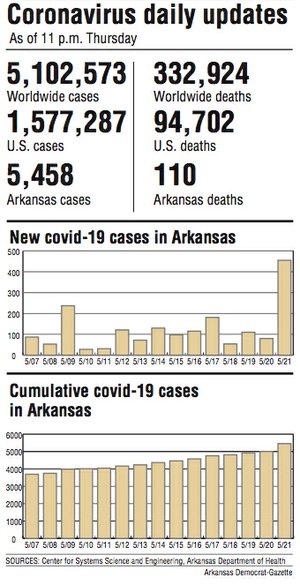