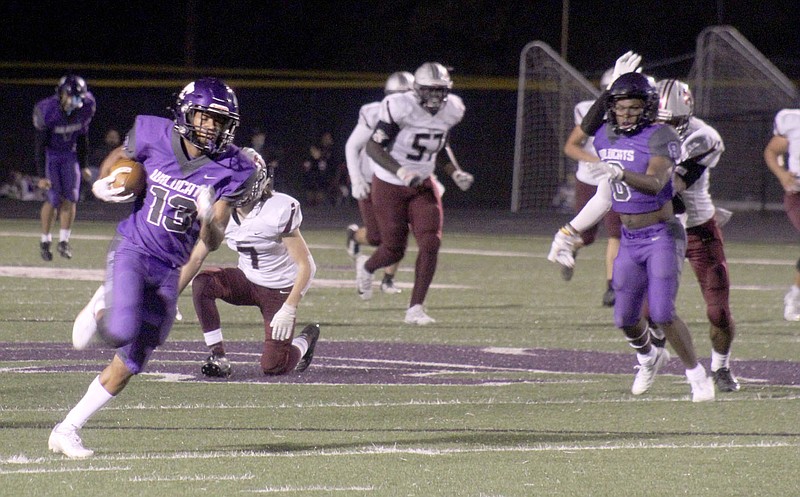 Matt Hutcheson/Special to Siloam Sunday El Dorado wide receiver R.J. Thomas runs for a big gain against Siloam Springs on Friday in the opening round of the Class 6A playoffs.

EL DORADO -- Siloam Springs was able to dig out of a big hole last week in a 50-47 win at Russellville, but the Panthers couldn't do it for a second straight week.

El Dorado took advantage of three first-half turnovers by the Panthers and enjoyed several big plays on its way to a 54-33 mercy rule win in the opening round of the Class 6A playoffs at Memorial Stadium.

The Wildcats (5-4), the third seed out of the 6A-East, finished with 574 yards of offense and will advance to the quarterfinals at Lake Hamilton next Friday.

"Offensively we were able to do some good things tonight," said El Dorado coach Steven Jones. "We were able to spread the ball around to some playmakers. We feel good about that moving forward."

Siloam Springs took the opening kickoff and drove down the field before settling for a 28-yard field goal by Ronald Mancia for a 3-0 lead.

It was all Wildcats after that.

Jackie Washington scored on a 69-yard reverse run on El Dorado's first play to go up 7-3.

"There's no doubt, Siloam came ready to play," Jones said. "Hat's off to them. They've got a good football team. They came in and gave a lot of great effort, taking the ball right down the field and scoring on the first drive. We just had to answer."

On Siloam Springs' next possession, Mario Ganter intercepted Hunter Talley to get the ball back for El Dorado.

Sheperd threw a 9-yard touchdown to Kamron Bibby to open the second quarter and El Dorado pulled ahead 34-3 with a 18-yard touchdown from Rester to James Hartfield.

Siloam Springs cut the lead to 34-17 with back-to-back touchdowns in the second quarter on a pair of rushing touchdowns from Jeff Phizema.

The first touchdown was set up by a 48-yard pass to Gavin Henson.

Phizema then recovered an onside kick to get the ball back. Talley hit Henson for 22 yards and the junior quarterback rushed for 24 to the 7. Phizema then carried in as the Panthers closed within 34-17.

El Dorado answered right back with two more scores before halftime to lead 47-17.

Rester hit Bibby on a 78-yard score and an awkward fumble led to Hartsfield scoring for El Dorado for the 30-point halftime lead.

Siloam Springs coach Brandon Craig was pleased the Panthers took the opening lead in the first half, but he said there were too many mistakes after that against a good football team.

"We did a great job (early). We took the ball, went down and got points on the board," said Siloam Springs coach Brandon Craig. "That's what we were after. Came back gave up a big play. We had guys we thought were in a good position and just didn't make the tackle. And then after that we turned the ball over three times in the first half and missed a bunch of tackles. You just can't do that against good teams, and these guys are definitely a talented bunch. When you miss tackles and turn the ball over in playoff games, you're going to lose."

Siloam Springs' Keondre Westbrook intercepted Rester to open the second half deep in El Dorado territory, but the Panthers were unable to capitalize.

Rester then hit a 74-yard touchdown to Washington to make it 54-17 and enforce the sportsmanship rule.

Siloam Springs scored a pair of touchdowns in the second half -- both on runs by Talley.

Talley thew a 39-yard pass to Henson and Phizema and Zach Gunneman each had big runs to set up Talley's first run.

Phizema, Gunneman and Talley also combined to rush 67 yards in the fourth quarter for the final score.

Rester went most of the way at quarterback with Sheperd nursing a hurt shoulder and he completed 6 of 9 passes for 250 yards. Sheperd went 6 of 8 for 80 yards and rushed for 88 yards.

Siloam Springs had 364 yards of offense. Phizema had 15 carries for 101 yards, while Talley rushed for 86 on 14 carries.

It was the final game for Siloam Springs' senior class. Craig said it's tough to see them go, but the Panthers will begin offseason program soon and begin working for 2021.

"It's a cycle for us as coaches, but as players it's a very hard moment," Craig said. "These seniors have been with us for four years. It's tough to lose these guys. You love them, you've been around them a lot, you've built great relationships with them and you hate to see them go out the door." 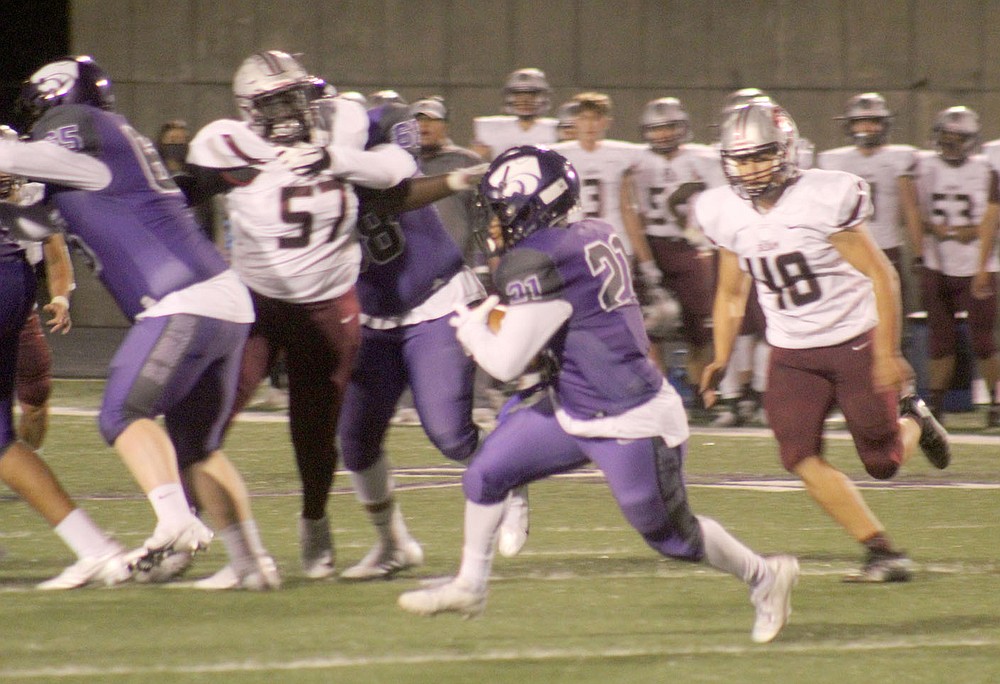