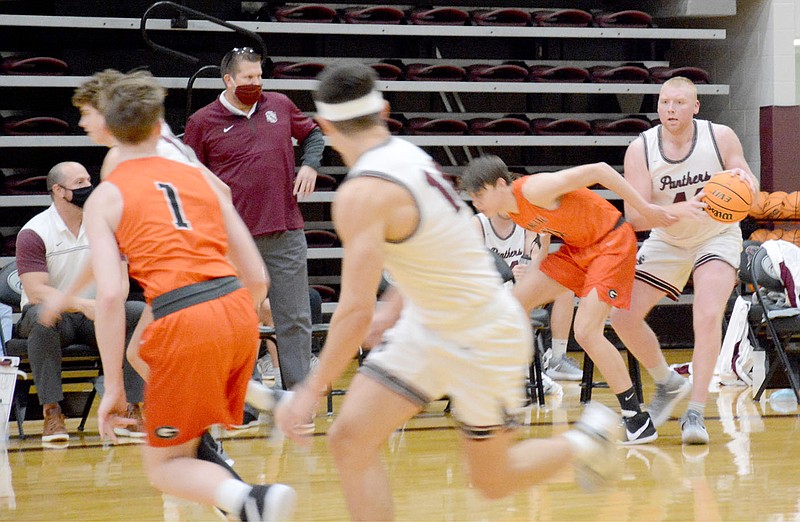 Graham Thomas/Siloam Sunday Siloam Springs senior Jackson Ford, right, looks to pass up the floor during a fast break in the Panthers' benefit game against Gravette on Tuesday at Panther Activity Center. The Panthers defeated the Lions 72-48.

The Panthers had been outhustled and more importantly out-rebounded leading to an 8-0 run by the Lions.

"There was one of those back-to-back-to-back plays where we thought the energy wasn't near good enough," Stewart said. "When we talk about rebounding, we have more length than we've had in a long time. We can put good length on the floor, but it's all for naught if you're not going to work hard, go hit somebody and get a hustle rebound."

The Panthers emerged from the timeout in a better frame of mind and went on a 16-1 run to take back control of the game and roll to a 72-48 victory in the exhibition at Panther Activity Center.

"That switch turned on and I think our defensive energy increased," Stewart said. "We got some steals and got some blow outs."

A couple of sophomores helped key the run early for the Panthers.

Sophomore Dalton Newman hit a mid-range jump shot out of the timeout. Then sophomore Nate Vachon had a steal near midcourt and threw ahead to a streaking senior Landon Ward for a layup and a 44-36 lead.

Ward hit a pair of jump shots sandwiched around a Newman 3-pointer. Junior guard Josh Stewart scored inside and then hit a 3-pointer as Siloam Springs pulled ahead 56-37.

"I thought Dalton shot well," Stewart said. "He took shots he could make. We want to be careful. We don't want to shoot all threes. We want to mix it up. It was really fun to see some of those young guys step up. And through those good things, there will be a lot of learning too. There's already been a lot of learning."

Ward led the Panthers with 21 points, while Carter Winesburg scored 11 of his 14 points in the first quarter as Siloam Springs led 23-13 after the first and 38-28 at halftime. Stewart and Newman each finished with 13 points, while Jackson Ford and Nick Gray each had four and Vachon three.

Michael Duke led Gravette with 14 points, while Tristan Batie had 10.

"I thought our kids played hard," said Gravette coach Matt Busch. "I was proud of their effort. We just didn't make enough shots. I think we lost the turnover battle and the rebounding battle. Those are two tough battles to lose and win games. There's a lot of good fight there. We're still missing a couple of kids in football. We'll have a couple coming. I just wanted to come over here and compete and I thought we did that."

Micah Hill poured in a game-high 32 points, including 17 in the fourth quarter, to lead the War Eagles against the Panthers in both teams' season-opener.

Heritage led 38-30 at halftime and 48-44 after three quarters, but the War Eagles pushed the lead out to 10 thanks to a pair of 3-pointers from Hill. The 6-3 junior hit six 3-pointers, including four in the big fourth quarter. Kyle Ingram added 15, including 11 in the first half.

"We played really good in spurts and really bad in spurts," head coach Tim Stewart said. "Jackson Ford had a really good game, and our guard play in the second half wasn't good enough to get to him. ... Their best player, Micah, finished the game hitting huge shots. Great early season learning experience."

The Panthers return to Panther Activity Center on Tuesday to face Fort Smith Southside in their first home game of the season. 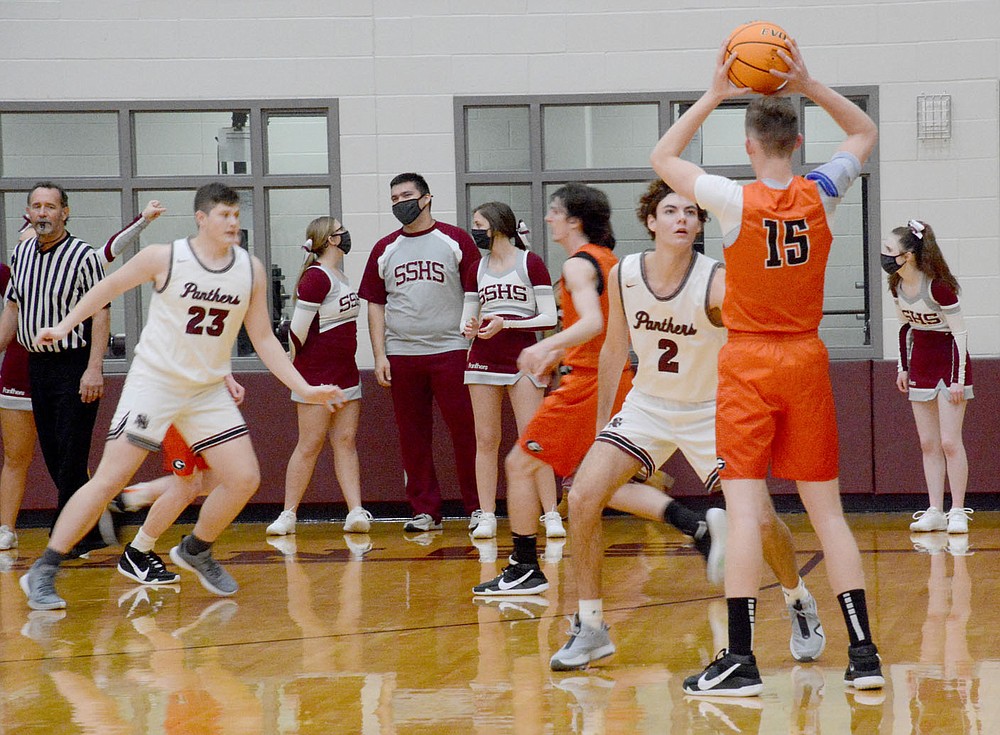