n The Siloam Springs senior will pitch for the University of Arkansas-Rich Mountain. by Graham Thomas | November 18, 2020 at 5:10 a.m. 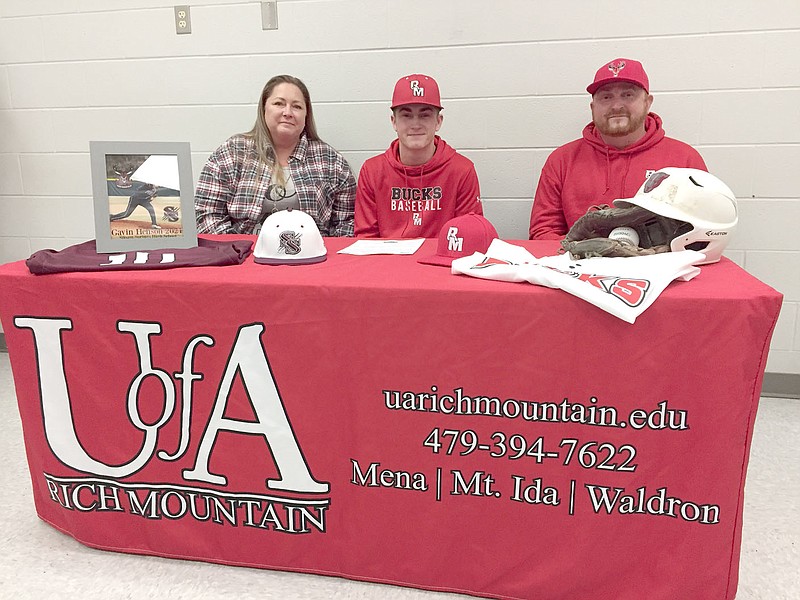 Gavin Henson struggled to hold back his emotions on Thursday afternoon.

With friends, family, teammates and coaches in attendance, Henson, a senior at Siloam Springs High School, signed a letter of intent to play baseball at the University of Arkansas-Rich Mountain.

It was a moment of joy for Henson, who choked back tears as he thanked his coaches and family members for helping the day become a reality for him.

"It's kind of crazy to think that what I've been working at since I was a little kid is all coming together finally," Henson said. "Obviously when I committed it was a real big thing for me obviously. It was crazy, but the fact that I'm signing today it almost doesn't seem fully real."

Henson is the third Siloam Springs baseball player to sign with the Bucks in the last year. Graduated seniors Isaac Price and Dalton Cook signed with UA-Rich Mountain in November of 2019.

"I knew about the program, but I didn't know a whole lot about it," Henson said. "(Pitching coach Jeff Burson) had reached out to me and I knew about him a little bit. I ended up going there on an unofficial visit, going and working out and stuff. I started developing a pretty good relationship with (head) coach Lance Spigner and coach Burson. Having Dalton and Isaac already there, it gave me an inside edge, figuring out if they liked it, if they thought it was ran well. They loved it and I loved it. It just kinda happened naturally. It was an easy decision to make."

Said Siloam Springs baseball coach Alan Hardcastle, "I know coach Spigner. He loves Dalton and Isaac and I know he's going to love Gavin, too. They work hard there."

Henson will be a pitcher at UA-Rich Mountain, the same role he'll fill at the top of the starting rotation at Siloam Springs this spring.

Henson pitched 34 2/3 innings as a sophomore and won a pair of conference games in 2019.

His 2020 baseball season was cut short because of covid-19, but Henson did pitch a complete game victory against Mountain Home early in the season.

Henson throws between 83 and 85 mph and played this past summer in the Perfect Timing College League.

"I've been around Gavin for a while," Hardcastle said. "I coached him in seventh-grade football. One of his former coaches Nick Reed, I was around him in high school. Going back to when Gavin was in seventh-grade, (Reed) said good things about him. He said, 'Man you've got a good player coming.' Great family, but I tell ya, Gavin deserves every thing he's got. He works hard. You've seen it on the football and on the baseball field. Looking forward to this baseball season."

Henson was in the midst of a standout football season with the Panthers this fall when he was sidelined with a head injury in Week 5 against Benton.

Henson, a 5-foot-10, 150-pound wide receiver, returned in Week 10 against Russellville and caught five passes for 150 yards in helping Siloam Springs rally for a 50-47 win. He caught four passes for 117 yards in the Panthers' season-ending loss at El Dorado on Friday in the opening round of the Class 6A playoffs.

On the season, Henson led the Panthers with 24 receptions for 561 yards and two touchdowns.