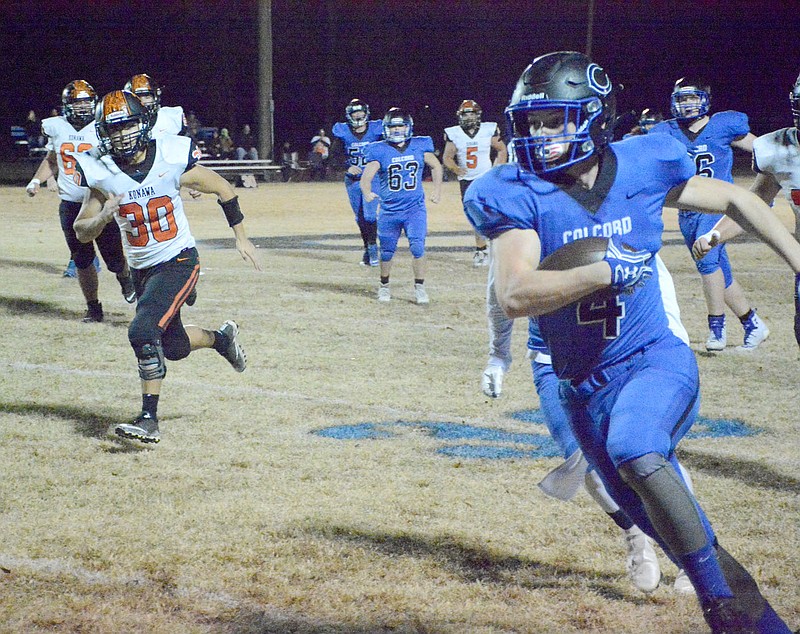 Graham Thomas/Siloam Sunday Colcord running back Trey Duncan runs for a 37-yard touchdown after catching a short swing pass from Stormy Odle during the Hornets' 41-18 victory over Konawa in the second round of the Oklahoma Class 2A playoffs.

COLCORD, Okla. -- Austin Martin swears the Colcord Hornets are not trying to spot their opponents a two-touchdown lead each week.

"That's not the plan," the third-year Hornets coach said with a grin. "I promise."

But that's what happened again Friday when Colcord found itself down 12-0 in the first quarter against Konawa in the second round of the Class A playoffs. The previous game, in the opening round against Stroud, Colcord trailed 14-0 at halftime.

But just like last week, Colcord stayed patient and overwhelmed Konawa in the second half for a 41-18 victory to keep its season alive. Colcord trailed 18-7 in the second quarter and 18-14 at halftime. The Hornets closed out the game with 34 unanswered points.

"We talked to them at halftime, on the offensive side, we just had to get better field position and we did have to open things up," Martin said. "Defensively we just had to keep playing hard and flip field position on them. Once we got that, got a score, got a spark, we kind of got rolling again."

Down 12-0 and sputtering on offense with just minus five yards total, Colcord hit its first big play in the second quarter when junior running back Trey Duncan took a short screen pass from Stormy Odle and raced 37 yards for a touchdown with 9 minutes, 9 seconds left in the second quarter.

Konawa, aided by a 15-yard penalty on a punt, answered with a scoring drive as Solomon Coon caught a 30-yard touchdown pass from Silas Isaacs to go up 18-7. It was the second scoring connection between the two as Isaacs hit Coon for a 23-yard touchdown pass in the first quarter.

Colcord was able to get back within 18-14 before halftime.

Odle, who was bottled up most of the night in the running game, bust through for a 34-yard touchdown run with 2:14 left in the half.

"I just told them at halftime, I felt really comfortable where we were," Martin said. "We didn't play very well in the first half and we were just down by four. So second half I just wanted to push the peddle down and get after it. and not to worry and just push forward and get after it."

Colcord's defense stopped Konawa to start the second half and the Hornets responded with a 77-yard scoring drive to take the lead for good.

Odle hit Eyan Williams for passes of 9 and 25 yards on the drive, and the combination of Odle and Duncan running the football allowed the Hornets to move the ball down the field.

Stone Mayberry ran in from six yards out as Colcord went up 20-18.

Konawa looked to respond and drove deep into Colcord territory, but the Hornets stopped the Tigers on fourth down on the opening play of the fourth quarter.

Mayberry threw a 19-yard pass to Jesse Martinez which set up Mayberry's one-yard run and a 33-18 lead.

After Colcord stopped Konawa at the 12, the Hornets set the final score with a eight-yard touchdown pass from Gabe Winfield to Williams.

Colcord finished with 269 yards of offense, with nearly 200 of those yards in the second half.

The Hornets were held to just 75 rushing yards on 29 carries. After completing 2 of 12 passes with an interception that led to a Konawa touchdown in the first half, Odle hit 4 of 5 passes in the second half for 106 yards and finished 6 of 17 for 167 yards. Williams caught four passes for 66 yards, while Davis had two catches for 72.

The Oaks-Mission at Timberlake Class C playoff game was not played on Friday with Timberlake advancing via forfeit.