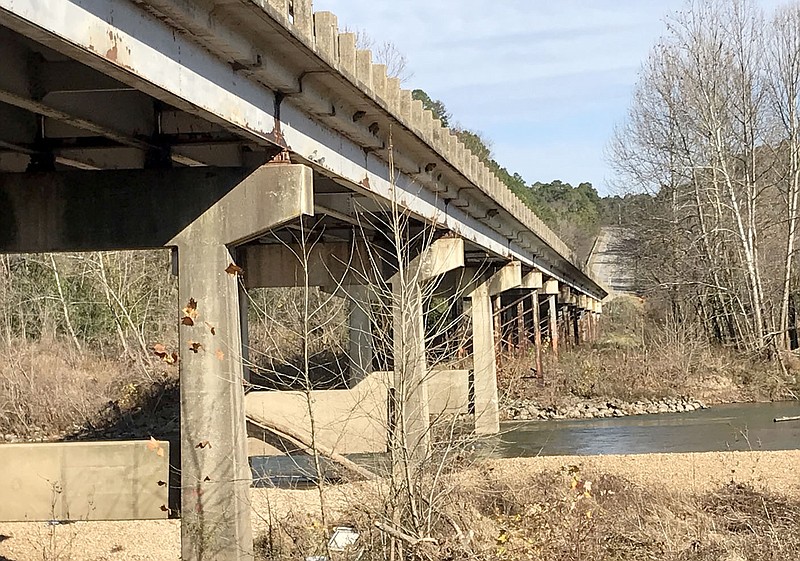 Janelle Jessen/Herald-Leader The aging Arkansas Highway 59 bridge over the Illinois River is slated for replacement in 2022. The Highway Commission hosted a virtual public meeting concerning the bridge on Nov. 10 and posted maps and meeting materials on its website. Public comments will be accepted through 4:30 p.m. Friday, Nov. 27, according to a press release.

The Arkansas Department of Transportation is proposing two options to replace the Arkansas Highway 59 bridge over the Illinois River, but both alternatives raise concerns for residents.

The DOT hosted a virtual public meeting concerning the bridge on Nov. 10 and posted a video presentation, maps and meeting materials on its website. Public comments will be accepted through 4:30 p.m. Friday, Nov. 27, according to a press release.

In the video presentation, which is still available online, the DOT proposed two options for replacing the aging bridge.

Improvements for Alternate 1 would begin at Lake Francis Road south of the bridge and follow the existing route of Arkansas Highway 59, crossing the Illinois River with a bridge approximately 70 feet west of the existing structure, according to the presentation. Improvements for Alternate 2 would also begin at Lake Francis Road, but then follow a straighter path toward a new bridge location 500 feet east of the current bridge. The improvements would end just past Old Goforth Road and into the curve on Highway 59 on the north side of the current bridge, the presentation states.

Both alternates would include two 12-foot lanes with 8-foot paved shoulders on either side and the designated speed would be 55 miles per hour, the presentation states. Traffic flow will be maintained during construction for both options, it states.

The project is budgeted for the 2021 fiscal year but isn't scheduled to begin until summer of 2022, according to Karla Sims, advanced public involvement specialist for the DOT. A decision about which alternate will not be made until the comment period has ended and the environmental project manager and engineers assess public comments as well as costs and environmental factors, she said.

As of Monday, about 30 people had submitted public comments, Sims said.

Jerrid Gelinas, owner of Gypsy Camp and Canoe on the west side of the highway, said he is concerned that Alternate 1 is very invasive to Gypsy Camp while Alternate 2 is very invasive to his neighbors' property and will cut through "a really beautiful river bottom." Alternate 1 will require blasting of the bluff along the river, which the DOT has said will be minimal but Gelinas worries will be more significant, he said.

"There is all kinds of history and artifacts found up there," he said.

It will also take out a grove of 100-year-old trees on the west side of the current bridge that shelters the Gypsy Camp from debris washing down the river during floods, he said.

Gelinas said he would prefer to see the new bridge built where the existing bridge already is, an option he calls Alternate 3. He is also concerned the DOT didn't reach out to landowners before creating the options, he said.

David Espinoza, owner of Arkansas 59 Canoeing and Rafting, on the east side of the highway, said he isn't concerned because neither of the proposed alternatives will impact his property. He has developed an alternate route to his canoe drop off sites in case construction impacts traffic flow on Highway 59, although the DOT has said traffic flow will be maintained throughout the project.

Mark Farrow runs a cattle operation with his father Hershel Farrow on property his family has owned since 1945, which is located on the south side of the river and west side of the highway. Farrow said Alternate 1 goes right through his property and would make it impossible for him and his father to access their hay fields. Even though Alternate 2 doesn't' have as much impact on him, he still called it a "ridiculous plan." He is concerned that blasting from either plan could negatively impact his livestock and said there are still cracks and holes in buildings from when the DOT did blasting in 1991.

Farrow also said he is unhappy the DOT didn't contact him or other property owners before creating the two options. He said he has been reaching out to the department for about two years.

"Basically, what they are trying to do is brush us off and run right through us," he said.

David Goforth, who owns land on both sides of the bridge and the river, said his family has owned the land for more than 100 years and has seen the highway change course over their property eight times over the past century.

He is concerned that Alternate 2 is going to take out a house that his grandparents built in 1928, where his daughter now lives, and will also take a lot of good land down by the river that he uses for farming and recreation, he said.

"(The house) is not on the historic register but it has a lot of sentimental value," he said.

Goforth is also concerned about the impact of the blasting, although he noted the DOT has said blasting would be minimal.

Goforth said the bridge needs to be replaced but said he doesn't see any great solutions. He doesn't think it would be feasible to build a bridge where the current bridge is located because a temporary bridge would have to be built to allow traffic flow, he said.

"It's sad to say, there is not a good solution for landowners," Goforth said. "Whichever way it goes, people are going to be impacted.

More information and public comment forms are available on the Arkansas Department of Transportation website at the following link tinyurl.com/yysgomq3. Comment forms can also be printed and mailed to P.O. Box 2261, Little Rock, AR 72203-2261.

Those who do not have internet access are asked to contact Karla Sims at 501-569-2000 to ask questions about the proposed project and how to access project information. 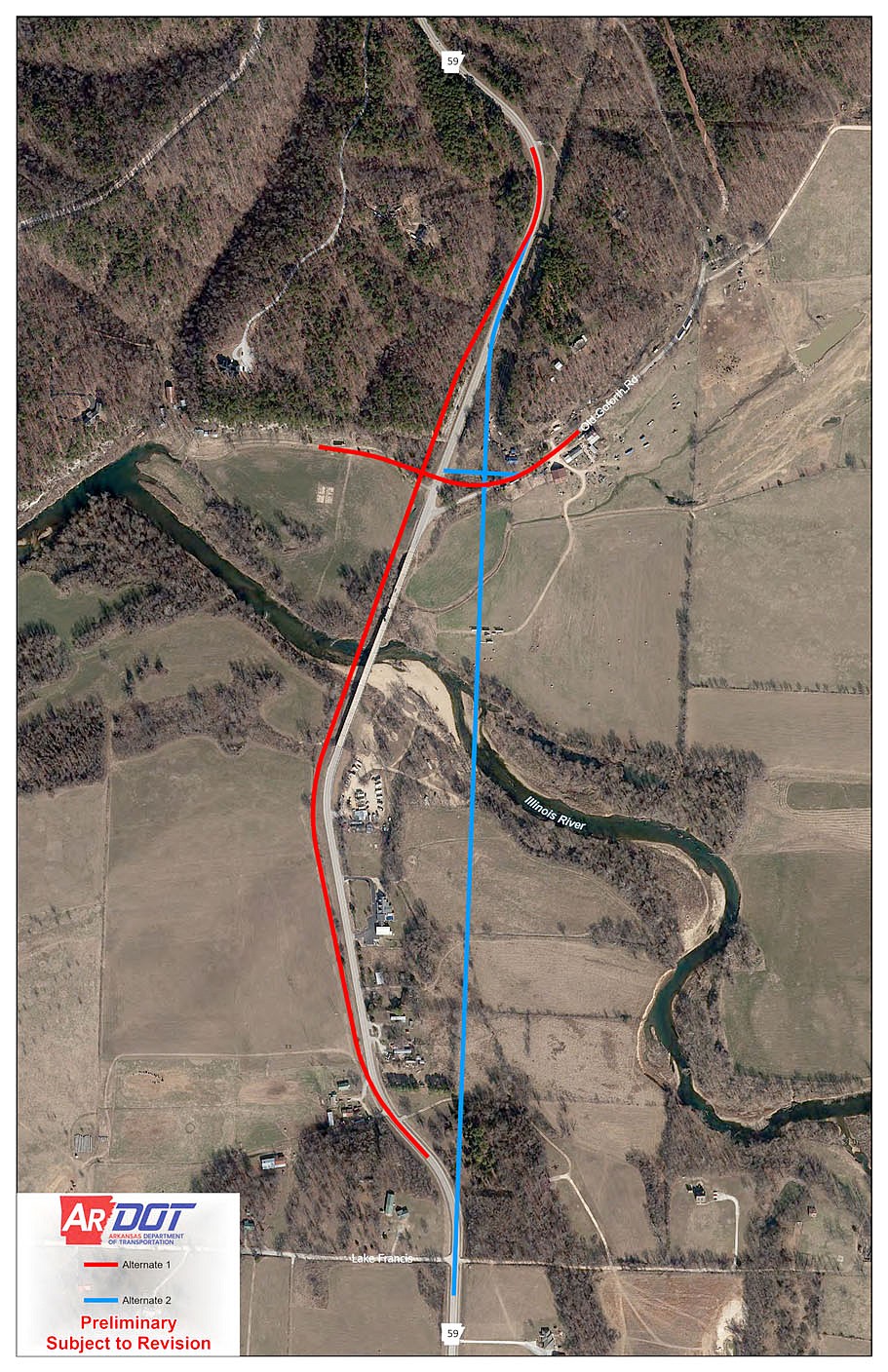