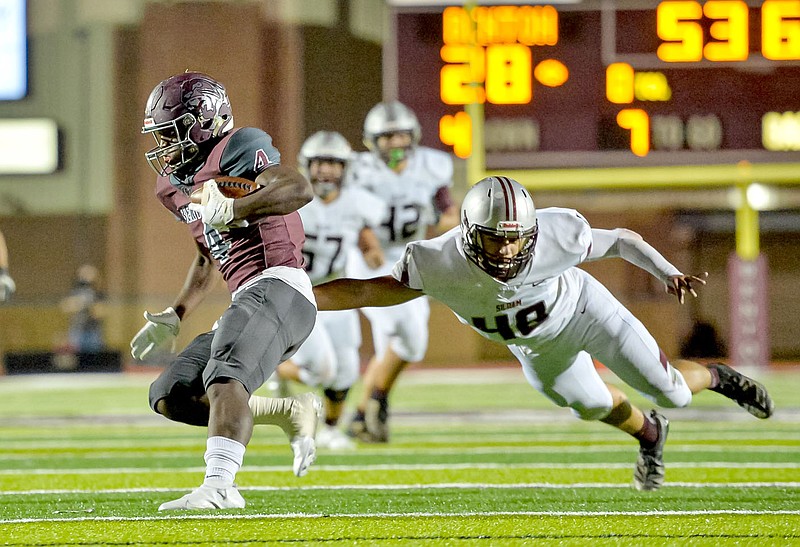 Jimmy Jones/Special to the Herald-Leader Benton wide receiver Andre Lane (4) pulls away from Siloam Springs linebacker Caden McHaney (right) during Friday night's game at Panther stadium in Benton. Siloam Springs is back in action at home Friday against Greenwood.

Ever since joining the 6A-West Conference in 2016, the Siloam Springs football team has had to deal with perennial 6A powers Benton and Greenwood in back-to-back games.

Siloam Springs was unexpectedly smashed at Benton 42-0 last week in a game that many thought would go right down to the wire.

Instead, it was a mercy rule at halftime and the Panthers left central Arkansas disappointed with their first conference loss.

"We had a pretty big failure on Friday night," said Siloam Springs coach Brandon Craig. "You have two choices. You can either keep failing or you can find a way to improve. Our message is let's get back out and go fight, and let's try and improve.We have a good football team. They've done a lot of great things this year. We know that (last) Friday night we just didn't play well at all. We've got to come back this week and get more focused, more disciplined and go out and play a great game Friday night."

Benton held Siloam Springs to a season-low 135 yards of offense in last week's game, including just 24 passing yards. The Panthers came into the game averaging more than 500 yards of offense.

Offensively, Benton scored on each of its first five possessions for a 35-0 lead at halftime, which resulted in the sportsmanship rule and a running clock for the second half. Benton finished with 375 yards on offense.

"I think they're the type of team, you can play some really good football for X-number of snaps, and then you'll have one breakdown and they'll take advantage of it," Craig said. "And they'll take advantage of it in a big way, because they have some really good athletes. We didn't play our best game offensively or defensively obviously. But we didn't do a great job of focusing on our basic fundamental principles. That's something we've got to do a better job with this week."

Moving on to Greenwood, the Bulldogs are under new leadership in 2020 as legendary coach Rick Jones, who led Greenwood to eight state championships and numerous conference titles, took a coaching job at the University of Missouri.

Jones' longtime offensive coordinator Chris Young was hired as head coach to replace his mentor, and the Bulldogs haven't missed a beat.

The Bulldogs got their only conference win 40-7 last week at Mountain Home. Their game against Little Rock Parkview was canceled because of covid-19 concerns at Parkview, and Greenwood and West played a nonconference game instead.

"I think they're the best team we've seen all year," Craig said. "They do everything fast. They do everything the right way. They're consistent with what they do. You can tell it's a program that has put a lot of time and effort into their kids throughout the year, when they start in the lower grades and all the way through. They have a very consistent model that they use, so their kids have heard the same terminology and the same game plans and everything since they were probably in fifth or sixth grade. It just shows up because they're very, very consistent with what they do."

All-state running back Hunter Wilkinson is back as a senior and has rushed 70 times for 306 yards and five touchdowns.

Siloam Springs played Greenwood tough last season, trailing 15-13 at halftime before falling 43-13 in the regular season. The Panthers and Bulldogs were tied 7-7 at halftime in the Class 6A quarterfinals before Greenwood pulled away for a 24-7 victory.

"Yeah we battled them. We just weren't able to finish the second half," Craig said. "That's something we were hoping this year we'd be closer to doing. The question still remains, all the stuff that we've done good kind of gets erased by how we played Friday night, but I know our kids are capable of continuing to play at a higher level. So my job this week is to make sure that I get everything I can out of them and make sure that they play at a high level on Friday night and that we play four quarters of football."