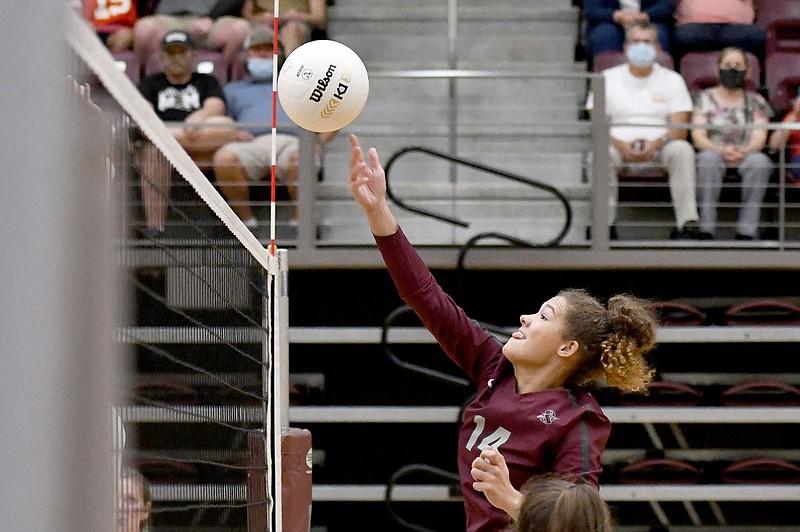 Bud Sullins/Special to the Herald-Leader Siloam Springs senior Makenna Thomas goes for a tip during a volleyball match earlier this season.

There's a memory about senior volleyball player Makenna Thomas that will always stick out to coach Joellen Wright.

It occurred this past summer, when the Siloam Springs Lady Panthers were going through workouts but still completely in the dark about whether they would be able to have a season. Wright asked the team if they were practicing and working out too much with so much uncertainty surrounding the season.

"Makenna stepped up and she said, 'I don't know about anybody else, but I want to practice as much as we can because these may be the only memories we get,'" Wright said. "She was fine practicing because she was making memories with her teammates."

That moment, Wright said, was a snapshot of Thomas' passion for her teammates, volleyball and for Siloam Springs.

"She loves volleyball," Wright said. "Makenna loves her teammates and she loves Siloam Springs. She is a competitor. Makenna feels a deep sense of connection to her teammates. ... She's always got a smile on her face about every challenge. She's passionate about the game and wants to do things at a high level."

"I've loved volleyball my whole life," she said. "Ever since I was little I had a volleyball in my hands. It's one of my favorite things."

"I felt a sense a pride of leaving a legacy," she said.

But it's definitely been a season like no other.

Along with the covid-19 pandemic, the Lady Panthers saw two key players transfer out of the district in the summer. Then the team was hit by covid-19 quarantine of key players early in the season.

The result was a very young Lady Panthers team, including several sophomores, all turning to Thomas for leadership.

"It's definitely been different and it's not exactly how I wanted my senior year to go, but at the same time I've enjoyed it," Thomas said. "I love the people and the team. The littles have been stepping up and I've enjoyed every moment. I love how our team has stepped up to adversity. I love our positive attiude throughout the whole thing and I couldn't imagine it with any other team.

"Most people didn't expect us to have a season. To have two weeks left is amazing. I never had a doubt because I wanted to think positively."

Going into her senior season, Thomas played several roles for the Lady Panthers, and she's done a little bit of all of them as a senior.

As a sophomore, Thomas emerged as a hitter and back-row player for a Siloam Springs team that advanced to the Class 5A semifinals.

Then as a junior, she assumed the role of setter as Siloam Springs ran a 5-1 offense.

This year, the Lady Panthers were going to depend on Thomas as a hitter and a setter, switching to a two-setter (6-2) offense, which they've run for most of the season. However, Siloam Springs recently had to go back to a 5-1 offense with another player lost to quarantine and Thomas resuming the role of primary setter.

Thomas has even gotten to play some at middle blocker.

"Ever since I was little my mom always told me I should always be able to play all positions," Thomas said. "I've always wanted to step up to the challenge. I was excited to play middle because I hadn't played there before. Being able to play anywhere makes me happy. I always wanted to be there for the team no matter what position I was."

Thomas is going to get a chance to play college volleyball as well. She's been offered scholarships by Southwest Baptist (Mo.) and Southwestern Christian (Okla.).

"I'm super excited to play volleyball at the next level," she said. "I've always wanted to play college volleyball. Knowing that I'm going to have a chance to play is really exciting." 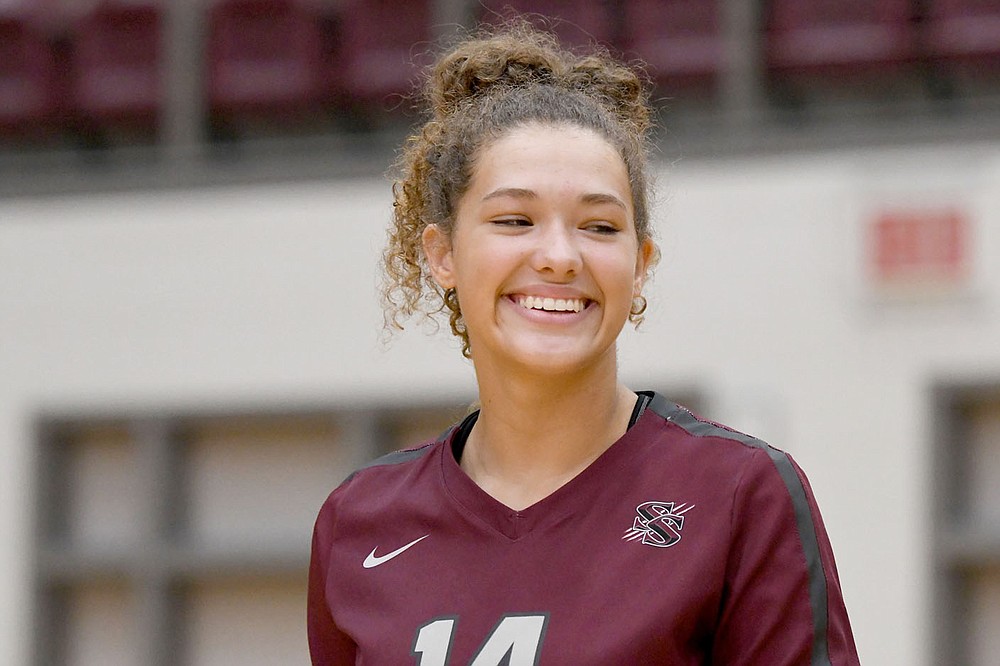 Bud Sullins/Special to the Herald-Leader Siloam Springs senior volleyball player Makenna Thomas is a three-year starter for the Lady Panthers, who are scheduled to host Russellville on Thursday at Panther Activity Center.